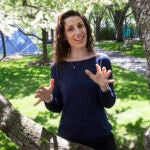 Warning labels that include photos linking consumption of sugary drinks to obesity, Type 2 diabetes, and tooth decay may reduce purchases of the drinks, according to a new study by researchers from Harvard T.H. Chan School of Public Health and Harvard Business School. In a field study conducted in a hospital cafeteria, researchers found that graphic warning labels reduced sugary beverage purchases by 14.8 percent, while text warning labels and calorie labels had no effect.

“Warning labels have been around a long time for tobacco products, but they’re a new concept for sugary drinks,” said study co-lead author Grant Donnelly, assistant professor of marketing at Ohio State University and a former doctoral student at Harvard Business School. “Text warning labels have been passed in San Francisco and are being considered in many jurisdictions in the U.S. and around the world. Ours is the first study to evaluate the effectiveness of sugary drink warning labels.”

The study was published online Monday in Psychological Science.

Researchers tested three different labels — one with text warnings about the health risks of sugary drinks, one with graphics warnings, and one with calorie listings — which they displayed near bottled and fountain beverages in a hospital cafeteria in Massachusetts. The labels were tested consecutively, with two-week “washout” periods between each test during which no label was displayed. More than 20,000 beverage sales were recorded during the study.

The findings showed that during the weeks when the graphic warnings were displayed, the share of sugar-sweetened beverages purchased in the cafeteria declined by 14.8 percent. Consumers appeared to substitute bottled water for sugary drinks. The average calories per drink sold also decreased during that period, from 88 to 75. The text warnings and calorie labels did not have a significant effect on beverage purchasing.

Then the researchers conducted two follow-up studies online. In the first, consumers were asked how seeing a graphic warning label would influence their drink purchases. Findings showed that the graphic warnings increased both negative feelings about sugary drinks and consideration of health risks over taste.

In the second, nationally representative online study, more than 400 participants were asked whether they would support putting the three labels on sugar-sweetened beverages. When participants were told that graphic warnings were effective at reducing sugary beverage consumption, they were equally supportive of the graphic labels warnings compared to text warnings or calorie labels.

“Sugar-sweetened beverages are the largest source of added sugars in the American diet and reducing intake of these beverages could improve population health,” said co-lead author Laura Zatz, doctoral student in the Departments of Nutrition and Social and Behavioral Sciences at Harvard Chan School. “As policymakers search for ways to reduce excess consumption of sugary drinks, graphic warning labels merit consideration as a tool that can empower consumers with salient information to encourage healthier choices.”

Co-author Dan Svirsky is a doctoral student and senior author Leslie John is associate professor in the negotiations, organizations, and markets unit at Harvard Business School.

Support for this study came from Harvard University’s Behavioral Insights Group and Harvard Business School. Zatz is supported by a T32 training grant (DK 007703) from the National Institutes of Health.