For President Faust, a festive farewell 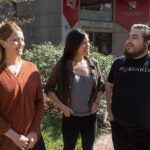 It was a festive farewell.

Drew Faust said goodbye as Harvard’s president Thursday as members of the University community celebrated her 11 years as leader with humorous and heartfelt tributes and moving musical performances in Sanders Theatre, and dancing that stretched into the evening at Annenberg Hall.

Faust became the University’s 28th president in 2007, the first woman to hold that job. Yet the Virginia native, historian, professor, and founding dean of the Radcliffe Institute for Advanced Study was quick to tell those gathered at her opening press conference that she was “not the woman president of Harvard; I’m the president of Harvard.”

Thursday’s party bookended the celebration of her inauguration on Oct. 11, 2007, which also was in Sanders Theatre, and which included musical tributes from students, alumni, and professors, as well as a humorous video introduced by actor John Lithgow ’67 titled “A Primer for a President.” On Thursday, several guests looked back to rate Faust on her years in Massachusetts Hall, offering grades in a number of “presidential” lessons. Unsurprisingly, she aced them all.

Lithgow, the afternoon’s master of ceremonies, kicked off the tribute with archival photos of Faust, and asked the faculty present to stand as he called for a voice vote to “celebrate and commend Drew Faust for a job well done.” The faculty gave a resounding “aye.”

“Achieving faculty consensus is an art,” quipped Lithgow, who gave Faust an A for “Lesson One: Take control of faculty meetings.”

Actor Courtney B. Vance ’82 and his two children awarded Faust an A-plus for her ability to honor traditions while being unafraid to question and challenge ones “that may have outlived their usefulness,” including the term “House master,” which Faust worked to replace with “faculty dean.”

Harvard’s 31st treasurer, Paul Finnegan ’75, praised Faust, who took office on the eve of the 2008 financial crisis, for staying strong during adversity. “When the going got tough, you got tougher. You acted swiftly but with care,” Finnegan said, offering her an AAA credit rating in lieu of a grade.

Faust also got high marks for taking chances during her presidency from someone who knows about taking public risks for a living. “You just have to be willing to screw up and not freak out when you do screw up, because you will screw up. I mean, you are really going to screw up,” joked comedian Conan O’Brien ’85 in a video clip.

Faust was also praised for using her position to fight for what she thought was right, for her devotion to athletics, and for her commitment to the sciences, which earned for her from Lithgow a new element on the periodic table: Drewdium.

“The project that is higher education, that is opening minds and changing lives and discovering truths, it’s just an exhilarating privilege to be part of it.”
— Drew Faust

When it came to picking advisers, Jack Reardon ’60, a former admissions officer, athletic director, and head of the Harvard Alumni Association, said Faust deserved high marks for having the most important expert always in her corner, Charles Rosenberg, Ernest E. Monrad Professor of the Social Sciences Emeritus — her husband.

Top marks for “Don’t Forget the Arts” were never in doubt. Faust made incorporating the arts into campus life a hallmark of her presidency. She helped introduce the Theater, Dance & Media concentration and added art to Harvard Yard. Diane Paulus ’87, artistic director of the American Repertory Theater, said she was “continually inspired by President Faust’s profound understanding that the arts have the unique ability to engage our hearts as well as our minds.” She then introduced a segment by jazz great Wynton Marsalis, who helmed a two-year performance and lectures series at Harvard, ushered in through Faust.

“The project that is higher education, that is opening minds and changing lives and discovering truths, it’s just an exhilarating privilege to be part of it and to have been in this institution and to have watched so many talented people ­— and you saw a lot of them onstage tonight — commit themselves to this project,” said Faust, offering her thanks to the crowd.

Mandolinist Forrest O’Connor ’10 and guitarist Jim Shirey ’11, members of the Grammy-winning bluegrass ensemble the Mark O’Connor Band, took the stage as part of a group called the Drew Crew. Aditya Raguram ’18, pianist and research fellow in genetics at Harvard Medical School, also performed, as did singer Joshuah Campbell ’16, who concluded the ceremony with a lively rendition of The Temptations’ “Ain’t Too Proud to Beg.” That got Faust up on her feet to bust a move center stage with Lithgow. 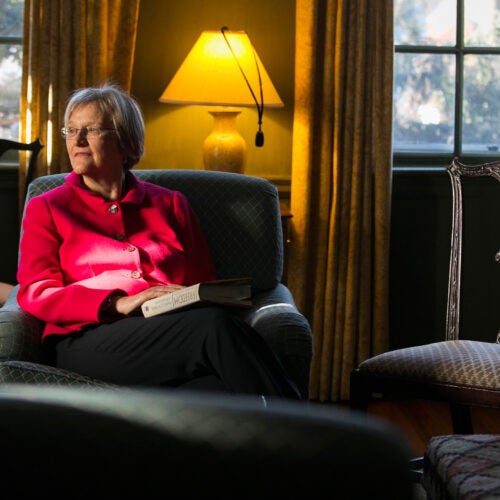 ‘What the hell — why don’t I just go to Harvard and turn my life upside down?’

Family, history, and the 1960s all helped to shape Drew Faust, but it was illness that urged her forward 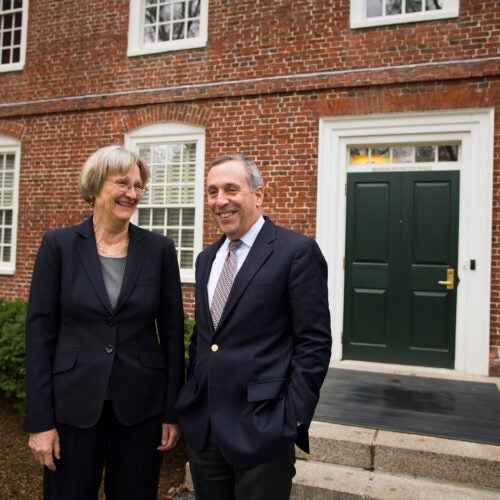 Drew Faust and Larry Bacow on learning from each other, the value of humility in decision-making, and the biggest challenges facing higher education

Attendees were then treated to a dance party in Annenberg Hall, which was transformed into a disco with neon lights, a D.J., a black-and-white checked dance floor, and some of Faust’s favorite foods, including shrimp dumplings, beef sliders, falafel wraps, bacon, and chocolate.

Jeffrey Douyon, a staff assistant at the Harvard Alumni Association, said that while he had never met Faust he felt as if he knew her after attending the celebration. Hearing “so many kind and beautiful words about her work over the last 11 years and to just be a part of the spirit of this room tonight was beautiful,” said Douyon.

“It’s bittersweet,” he added. “It’s sad to see her go. On the other hand, I am excited to see how her legacy lasts here at Harvard.”