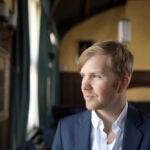 ‘Secular sermons,’ straight to your phone

Retrospective to educate, introduce public to power of his legacy

When activist and artist David Wojnarowicz died of AIDS-related illnesses in 1992, he left behind a substantial legacy. In addition to his work as writer, painter, performance artist, and photographer, the 37-year-old New Yorker had been a key figure in the post-punk Cinema of Transgression movement, which used humor, sex, and violence to confront the more staid artists of the day — and to call out racism, sexism, and homophobia.

Using himself and the city as subjects, in works that blended imagery from the burgeoning hip-hop/street art culture and gritty urban scenes, Wojnarowicz’s work is both very much of its day and still extremely powerful. In the years since his death, however, Wojnarowicz has become less known for his multimedia creations than for the uproar around them — specifically, around his use of religious imagery.

A series of retrospectives this summer seeks to remedy this lack, and on Wednesday, 6–8 p.m., the Harvard Art Museums will screen “Transgressions: David Wojnarowicz, Post-Punk Cinema, and Queer Video Activism,” five short films by or featuring the artist, as part of the exhibition “Analog Culture: Printer’s Proofs from the Schneider/Erdman Photography Lab, 1981–2001,” on display through Aug. 12.

Jessica Bardsley, a Ph.D. candidate in film and visual studies at Harvard’s Graduate School of Arts and Sciences, curated the presentation. After the film, she will discuss Wojnarowicz’s life, death, and legacy with the artist A.K. Burns, whose current Lightbox Gallery installation “Survivor’s Remorse” was inspired by Wojnarowicz’s photographs.

The goal, says Bardsley, is “understanding the political and artistic context that David was working in and also understanding what a passionate, angry, but also beautiful maker he was.”

When Wojnarowicz died, she said, “he wasn’t really famous, but many of his contemporaries now are very well-known.” These artists, like Richard Kern, Beth B., Gregg Bordowitz, and Nick Zedd, have kept Wojnarowicz’s legacy alive, and this summer the Whitney Museum in New York is mounting a major retrospective. “The last few years,” said Bardsley, “there’s a growing desire to more fully pay attention to the work he made.”

Until now, she explained, when the general public has recalled Wojnarowicz at all, it has been because of his unfinished film, “A Fire in My Belly,” whose disturbing, surreal images of blood, masturbation, and self-mutilation seem to reference the AIDS crisis. A segment of this film, on which Wojnarowicz worked from 1986 to 1987, was shown in 2010 as part of a larger exhibition at the National Portrait Gallery of the Smithsonian Museum. Despite the footage being placed in a much larger context — it was shown in a room dedicated to AIDS-related artwork and required interested viewers to activate it by touch screen — the Smithsonian screening sparked controversy because of the film’s depiction of ants crawling over a crucifix. Although the artist never showed the film in his lifetime and there is some debate about his intentions for it, the existing footage — nearly 21 minutes — will be part of the Harvard Art Museums retrospective. This screening, said Bardsley, “is an attempt to speak to the interest in that particular film in the bigger context of what he was up to.”

Jennifer Quick, curator of the “Analog Culture” exhibit and co-organizer of “Survivor’s Remorse,” stresses the importance of that context. “David is really important in terms of his activist work. He brought a lot of attention to the AIDS crisis and how it was impacting artists,” said Quick, the John R. and Barbara Robinson Family Associate Research Curator in Photography, Division of Modern and Contemporary Art. “Living in the Village in the ’80s and the ’90s, David was at the heart of it — it was such a small network, they all knew each other.”

“He was living with AIDS,” Bardsley elaborated. “He had many friends who were dying of AIDS-related illnesses, and as a queer person and a person without much money or health care, [he was] trying to articulate being outside society — on the margins.

“He’s a wonderful example of an artist whose activism and art practice is really one,” she said. “Especially right now, when there are so many artists who are trying to find ways of channeling their politics into their art.”

“Transgressions: David Wojnarowicz, Post-Punk Cinema, and Queer Video Activism,” will be screened Wednesday, 6–8 p.m., at the Harvard Art Museums.  Tickets will be distributed beginning at 5:30 p.m. at the Broadway entrance. One ticket per person.