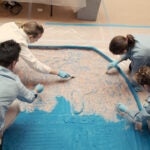 When Soyoung Lee arrives at the Harvard Art Museums, some aspirations already will be clear

When Soyoung Lee takes the reins as the Harvard Art Museums’ chief curator in September, she will be joining the institution at a vibrant time.

“The Harvard Art Museums have this incredible history,” said Lee, speaking by phone from the Metropolitan Museum of Art in New York, where she is currently curator in the Department of Asian Art. In 2014, she noted, the museums “opened this expanded, renovated, beautiful building and brought the three museums [the Fogg, Busch-Reisinger, and Arthur M. Sackler] together, which is an amazing feat. What are the next steps? Where are the Harvard Art Museums going through the 21st century? To think of that big picture, about institutional priorities, institutional direction, is really exciting.”

For Lee, who has spent the last 15 years at the Metropolitan, the challenges of a teaching museum won’t be entirely foreign. At the Met, in addition to serving as the museum’s first curator of Korean art, she has been the chair of the Forum of Curators, Conservators, and Scientists,­ the Met’s academic body comprising more than 200 members, and subsequently served as its delegate to the board of trustees.

In these roles, she said, she found herself “thinking about the broader museum’s mission and leading that group and advocating for scholarship and the work of that academic group.”

This experience has given her museum work greater scope. “As a curator, you’re focused on your own projects,” explained Lee. One of the most attractive parts of the chief curator role, she continued, is that “it takes me into leadership.”

“I’ve been nurtured by many fantastic people, and I’d like to return that,” she said. “Mentoring the next generation is important to me, and in this role I’ll have a much bigger capacity to do that.”

One of Lee’s first projects will be re-examining the museum’s training programs, including its internships, said Martha Tedeschi, Elizabeth and John Moors Cabot Director of the Harvard Art Museums. In particular, the two-year, postdoctoral program for curators and conservators needs to be “pulled together and formalized,” Tedeschi explained.

“It’s a program that we’re very proud of, but it’s a little ad hoc right now,” said Tedeschi. “We want to try to look at ourselves more holistically as a place that is honing its expertise in training and teaching.”

“I’m really looking forward to essentially training the next generation,” said Lee. “We’re doing a great job with the students, and I’d like to make sure that’s at the highest level it can be.”

Lee’s mandate reaches beyond the University. “Since the museum reopened in 2014, we’ve re-established ourselves as one of the premier teaching museums in the country,” said Tedeschi. “But we also have a responsibility as a public museum, and we strive to have local, national and international impact. Coming from the Met, Lee has the drive to help us realize both the campus role and our civic role.”

For Lee, that means looking at “the whole next generation around the Cambridge area and the Greater Boston area, and the way we can impact and change their lives.”

Lee also will be re-examining the role of contemporary art at the museums. “It’s a crucial topic,” she said. “And there are many different roles the University can play.”

Referencing the nearby Carpenter Center for the Visual Arts, and other arts institutions in the area, Lee noted, “It feels like a moment where everyone is looking to collaborate. In terms of my own projects, almost all of the exhibitions involved collaborations, in the broadest sense.” In her first Met role, for example, “I was very much focused on presenting Korean art in the broader Asian or East Asian context.” In addition to working with the museum’s other departments, she arranged loans and international partners.

“That’s something I can bring as well,” she said. If there are “usual and perhaps unusual partners as well, I’m on it.” In her capacity as chief curator, many of those partners will likely be found in the University community. “The Harvard alumni network is vast, and simply amazing people, and many are art lovers and collectors.”

Summing up her years at the Met, Lee sounded eager to move forward. “This is an amazing place, but in one’s life there are certain moments when one is ready for bigger challenges and different challenges as well,” she said.

“The Harvard Art Museums in physical structure perhaps is smaller” than the Met. “But as is befitting the University it sits in, it’s a world-class collection, the new building is amazing, and the staff is world-class as well. This is an enormous challenge that presents a lot of opportunities that are very different from my current role.

“Being part of the mission of teaching and training the next generation and to be part of this breathtaking entity that is Harvard,” said Lee, “it’s exciting.”