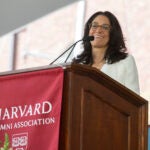 Sarah E. Thomas will retire from her roles as vice president of the Harvard Library and University Librarian and as Roy E. Larsen Librarian of the Faculty of Arts and Sciences at the end of this year.

“It has been an immense privilege to have been shaped through the association with the world’s greatest library and to have been one in the series of men and women who have guided it forward,” she said in a letter to the Harvard community. “I am proud, first and foremost, of my library colleagues: innovative, deeply knowledgeable, and dedicated to service. They excel in creating and curating the collections so deeply valued by our users, and they now are building the network of distributed access to physical and digital resources around the globe.”

“Sarah Thomas has reimagined what a University library can be,” said Harvard President Drew Faust. “Her insight and ability to bring people together has enriched research, teaching, and learning at Harvard, and her many contributions will affect the ease with which students and faculty can access our extraordinary resources for years to come.”

Thomas joined Harvard Library in 2013 as vice president and University librarian, maintaining overall responsibility for the library in close collaboration with the Library Board, the Faculty Advisory Council, and the Library Leadership Team. A month later, she was named the Roy E. Larsen Librarian of the Faculty of Arts and Sciences as the FAS libraries and the Harvard Library were joined under her leadership.

Thomas handled her dual roles with enthusiasm and an open mind, as she worked to preserve the unique resources of each library while connecting them administratively.

“Our libraries are one of Harvard’s and higher education’s greatest assets, and Sarah has expanded the library’s strong foundation of print and digital collections while also developing an organization appropriate for its leading position,” said Michael D. Smith, Edgerley Family Dean of Harvard’s Faculty of Arts and Sciences. “I am incredibly grateful for everything she has accomplished, and the FAS will miss her leadership.”

“Working with Sarah over the past five years and witnessing the library’s progress during that time has been a pleasure,” Provost Alan M. Garber said in a letter to Harvard faculty. “I have been inspired by her unwavering commitment to excellence and her true embodiment of the spirit of One Harvard, evident both in her overarching strategy for the library and in her daily interactions with faculty and staff across Schools.”

One Harvard, one library

Thomas took on the challenges of a large and complex organization after a period of uncertainty. She shaped the library’s vision to increase focus on user-centered services that connect faculty, students, alumni, and researchers with library resources online and in person, and to meet their needs, whatever they may be. By “investing in a future in which we accomplish more working together than separately,” Thomas said, she echoed Faust’s call for the University to be “One Harvard.”

Her collaborative approach included listening to faculty, staff, students, and alumni and being open to new ideas. She worked with library staff to support their expertise as stewards of the library’s collections, helping users discover Harvard’s vast holdings.

Over her tenure, she and her colleagues developed a University-wide library committee structure that tapped the talents of library staff to create best practices and common policies for the library. She also partnered with peer institutions to participate in services such as Borrow Direct and led efforts in collective collecting, where university libraries share their materials with one another and build collections collaboratively.

Thomas spearheaded efforts to advance digital scholarship. By committing library resources to open access, millions of pages of resources are now available to scholars around the world, including all of Harvard’s materials from Colonial North America.

During her tenure, the Harvard Library continued its leadership in the preservation of global cultural heritage for current and future generations, from “electronic resources to Emily Dickinson’s poetry to fragile Middle Eastern manuscripts.” Thomas said. “Harvard libraries — our diverse physical manifestations and our growing digital presence — are the lifeblood of research and learning and the stuff of knowledge and wisdom.”

Thomas’ vision for a welcoming environment included expanding the library’s collections strategy and teaching programs to be more inclusive. She opened up Pusey Library’s doors after more than a decade to Harvard Yard and the wider world, supporting public exhibitions from the Harvard University Archives and the map collection that attracted thousands of visitors. Her commitment to building community across Harvard’s libraries included embracing a variety of learning styles and adapting library spaces to fit different needs, such as the reimagined Cabot Science Library.

She helped build bridges across Harvard by encouraging librarians to partner with faculty. Librarians now collaborate with the academic community in areas such as research data management and data visualization. They have also increased the number of classes taught in library spaces using special collections.

Pioneer in the library field

Before Harvard, Thomas was the first woman and the first non-British citizen in 400 years to hold the position of Bodley’s Librarian and director of the Bodleian Libraries at the University of Oxford. She also served as pro-vice-chancellor and member of the faculty of modern languages. Under her guidance, the Bodleian Libraries were awarded the Queen’s Anniversary Prize for their work to increase access to their collections.

Prior to her role at Oxford, she was the Carl A. Kroch University Librarian at Cornell for 11 years. She has also served as president of the Association of Research Libraries and helped lead the Program for Cooperative Cataloging at the Library of Congress, along with holding posts at the National Agricultural Library and the Research Libraries Group at Stanford University.

Thomas was awarded the Melvil Dewey Medal from the American Library Association and is a fellow of the American Academy of Arts and Sciences and the American Philosophical Society.

She began her library career at Harvard in 1970, filing cards into Widener’s official catalog.

“It was a wonderful privilege to commence my professional life at Harvard, in the aura of great libraries, great collections, and great librarians,” said Thomas. “The experience shaped my understanding of what a library could and should be. And, returning to Harvard five years ago, I was profoundly honored to be entrusted with the leadership of the Harvard Library as it navigated its transition to a 21st-century library within One Harvard.”