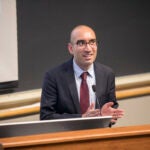 González-Alverio hopes her musical talents can remedy pain from physical to psychic, even to prematurity

A person who sings, plays many instruments, and is fluent in four languages can garner so many opportunities it’s hard to focus. What to make of one’s mastery?

Jeniris González-Alverio, 29, decided on music therapy, using the power of music and song to help children and adults recover from injuries and overcome disabilities.

“If there’s one thing my life is focused on, it’s using my skills and resources to change the world for the better. I want to be of service,” said González-Alverio, Ed.M. ’18.

Her parents weren’t musical, but González-Alverio was a natural singer and musician from an early age. She can play “at least” 10 instruments, including piano, guitar, ukulele, drums, bass guitar, flute, and piccolo. Languages have come easily too. She’s fluent in English, Spanish, Italian, and American Sign Language.

González-Alverio was a teenager when she first thought about music therapy: She noticed while singing lullabies to a baby cousin that the sound of her voice calmed him.

Music therapy is the therapeutic use of music to address individuals’ physical, emotional, cognitive, and/or social needs, according to the American Music Therapy Association.

After graduation, González-Alverio worked as a music therapist at Boston’s Community Music Center and Massachusetts General Hospital’s pediatric unit. She then moved to Orlando, Fla., where she spent two years running her own practice. She also played at a dueling-pianos bar, Howl at the Moon, to keep her performance skills sharp and learn new songs. (She continues to play at the bar’s Boston location.)

The piano gig helped her save money to return to the Boston area. Now González-Alverio wanted to teach music therapy, on her own or at a hospital, and that meant getting a graduate degree. On a lark, the unassuming González-Alverio applied to the Harvard Graduate School of Education (HGSE), feeling almost certain she would not be accepted. She was and started in September 2017.

Soon after González-Alverio arrived in Cambridge at Harvard, Hurricane Maria struck Puerto Rico. Unable to reach her family, González-Alverio was scared for their safety. She could not sit idle. Tapping her Berklee connections, she went about organizing a three-hour concert to raise money for hurricane victims, enlisting local entertainers to perform with her. She quickly realized her new classmates from Houston and across the southeastern United States had been affected by devastating storms and expanded the fundraiser’s scope to include them.

The event’s success was no surprise to those who’ve watched González-Alverio at Harvard. Eileen Berger, assistant director for access and disability services in the student affairs office at HGSE, said González-Alverio has demonstrated qualities that have made her a role model to her peers and will make her a success after graduation.

“What will always make her successful is her work ethic and clarity and ability to articulate a vision,” Berger said. “And people find it kind of hard to say ‘no’ to her.”

González-Alverio has accomplished all this in the face of personal challenges.

A decade ago, an exhausted González-Alverio fell asleep behind the wheel of a car and crashed. She suffered a broken pelvis that has not healed and she struggles with mobility. Then after starting at Harvard, she was diagnosed with diabetes. She still has not allowed any challenge to become an obstacle.

Premature infants can be easily alarmed by loud noises or sudden movement. According to González-Alverio, it has been shown that premature babies given music therapy are discharged from the hospital sooner, saving parents, insurers, and hospitals money.

She said a common misconception is that music therapists are people in the hospital lobby strumming guitars. Music therapy is acknowledged as a legitimate form of therapy, and her work with patients is based on specific conditions and what is known about the effect of music on the brain, she said.

“The work I try to do is because of where my heart is,” González-Alverio said. “It’s not entertainment.”