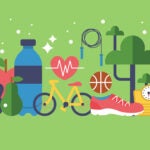 Five healthy habits to live by

On Dec. 20, Lindsay D’Amato woke up and put on her glasses. She was relieved when she could see normally. It told her the brain surgery had gone well.

The surgery brought an end to a scary and uncertain chapter in D’Amato’s life, one that flipped her customary role of caring for others, and made her the one being cared for.

Five months on, and D’Amato will graduate — on time — from the Harvard School of Dental Medicine (HSDM). Despite the fear and disruption caused by the tumor and subsequent surgery, D’Amato acknowledged that its timing was serendipitous: The surgery occurred right before winter break, giving her several weeks to recover.

She wound up missing just three weeks of her community health externship at a community dental clinic, and was able to make up missed time over the ensuing weeks.

Though her recovery went smoothly, it was not easy. The surgery left her with constant, severe headaches as the brain healed. Though nearly nonstop for the first three weeks of recovery, the pain has subsided, leaving the scar on the left side of her head the most prominent remaining reminder.

The episode was the latest in what D’Amato called her “so weird” life. She grew up in St. Louis nurturing a budding interest in the sciences. Her high school AP biology and physics teachers had a particular influence on her and she went on to study biological engineering at the University of Missouri.

Though contemplating a career in engineering after graduation, she was also attracted to the Peace Corps. She joined a civil engineering master’s degree program that combined a year of study at the University of California, Davis, with two years in the field doing hands-on water and sanitation work.

After her year in California, D’Amato left for rural Panama, where she raised money and installed a solar-powered electric water pump in a community whose diesel pump only ran for 15 minutes a week because of the cost of fuel. She later coordinated with the Colorado nonprofit Bridges to Prosperity to put in a bridge so people heading to work and school could cross a nearby river that regularly swells in the rain.

While in Panama, D’Amato began to reconsider engineering as a career. She realized that she liked interacting directly with people and began to think about other options, including dentistry, which an uncle with a private practice had recommended she consider. She applied to HSDM and was accepted, arriving in Boston in the fall of 2014.

Once here, D’Amato immersed herself in her studies and in her clinical duties at the Harvard Dental Center and her externships. But she also found time to join the Crimson Care Collaborative and bring her dental skills to men held at the Nashua Street Jail in Boston. Dental care was badly needed there, she said, as the overwhelmed prison dentist mainly saw the most advanced cases: men in pain for whom care often involved extraction.

“Lindsay was a delight to work with. Like many of the volunteers we’re lucky enough to have, she has a keen understanding of the social determinants of health and how incredibly vulnerable many of our patients are,” said Lisa Simon, a fellow in oral health and medicine integration and attending dentist of the jail and dentistry program. “It was really wonderful to watch her clinical skills and clinical confidence grow and to see her really connect with patients who may have had bad dental experiences in the past.”

Aram Kim, instructor in restorative dentistry and biomaterials sciences at HSDM and D’Amato’s adviser, said the engineering background that she and D’Amato share will serve her in good stead in the future.

“Lindsay’s engineering background has made her an excellent problem-solver,” Kim said. “As a dentist, you need to be a doctor, a scientist, an engineer, a mechanic, and an artist. … I’m excited for her future and her patients are very lucky to call her their dentist.”

It was last August, while doing an externship at Massachusetts General Hospital, that D’Amato noticed problems with the vision in one eye. She had been working long hours, so she initially attributed it to fatigue, and then, when rest didn’t cure it, to an out-of-date eyeglasses prescription. When a new prescription didn’t do the trick, additional tests indicated the problem was with her optic nerve.

By then, it was late November and D’Amato was increasingly fearful she had multiple sclerosis, which mirrors some of her symptoms. She went for an MRI and asked the doctor not to call her with results before the following Wednesday, because she was going to be in New York interviewing for residencies on Monday and Tuesday and had to sit for a board exam on Wednesday. They called Monday night.

“I asked you not to call,” D’Amato recalls saying into the phone. “I’m standing on Fifth Avenue with a suitcase.”

“I didn’t think this should wait,” the doctor replied. “There’s a mass on your brain.”

D’Amato spent a tearful evening in her hotel room and called a friend in Australia whose husband is a neurosurgeon. He looked at the MRI files her physician sent over and told her that the tumor was in all likelihood a meningioma, which was treatable and, as brain tumors go, relatively good news.

By the end of the first week of December, D’Amato had returned to Boston and been scheduled for surgery at Brigham and Women’s Hospital. The operation took 7½ hours, but was a success.

“When I woke up, I reached for my glasses and I put my glasses on and I could see again, which was crazy,” D’Amato said. “They had said that … it looked like the optic nerve was intact, so we might know fairly quickly if it was going to get better afterward, so I was curious to find that out.”

Now, she is looking forward to graduation and a residency in the Bronx at the Jacobi Medical Center.