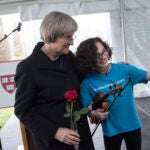 Enthralled by the power of words, Nicole Powell had envisioned a career in communications when she entered Loyola Marymount University (LMU). But then she took a sophomore internship.

In a summer with Children’s Defense Fund Freedom Schools, an enrichment program for low-income students modeled after the Mississippi Freedom Summer Project of 1964, Powell mentored elementary school students from South Los Angeles. And she found her calling.

“I wanted to work in journalism, but the program changed my life’s trajectory,” she said. “I felt really fulfilled being part of a community and helping the community.”

Powell graduated LMU with a B.A. in communications and a minor in journalism, then moved on to Harvard Divinity School (HDS) to pursue African-American religion studies. There, she continued her efforts to bring people together and build up community. Powell spearheaded the creation of Low-Income Student Advocates, which runs a community food locker and monthly clothing swap. She also worked on the Black Religion, Spirituality, and Culture Conference, and became president of the Prison Education Project, a student group that tutors incarcerated people pursuing college degrees.

The HDS graduate is quick to point out that working in prisons is necessary for any social justice endeavor.

“When we have a conversation about social justice, it’s important to think about who is not present and engage with folks who are impacted,” Powell said. “We have to think how to bring them into our space in a way that is not exploitative. We have to know that we can’t do this work without them.”

Powell’s interest in social and racial justice goes back to her childhood. Raised in Los Angeles in a tight-knit family, her parents and grandmother taught her important lessons about history, race, and education. When her teachers said Kwanza songs didn’t exist, her mother produced a CD full of them. And when she learned about George Washington in school, the teacher didn’t mention he had slaves. “I’d go home, and they’d correct what I had learned in school,” she said. “They kept me grounded.”

Powell had always known about racial disparities and the history of racism, but it was when she traveled to South Africa as an exchange student in her senior year at LMU that she understood the different ways racism is expressed. “Racism against South African blacks is more blatant and explicit,” she said. “The same things happen in the U.S., but here it’s a bit subtler.”

Powell’s internship lasted eight weeks, during which she mentored students and taught them to love reading and learning. By the time it ended, she had realized that one way to fight racism was to organize communities to change from the inside.

Inspired by the Freedom Schools, Powell created an enrichment program called Harambee — Swahili for “coming together” — during her junior year at LMU. The Freedom School starts each day with a Harambee session, with chants, cheers, and a motivational song to get the children pumped up.

At the Divinity School, Powell has been learning about the role of theology, faith, and religion in social movements both at home and abroad. But she has also made time to attend concerts, watch horror movies, and explore Boston’s fast-food options.

After graduation, she will return west to be close to her family and continue her studies at the University of California, Los Angeles, where she has been accepted to a master’s program in public policy. There, she said, she’ll close the circle by bringing back home the lessons she learned while working with the Freedom Schools.

“I’d like to write social policies and legislation with communities in mind, because all the work I do is with and for the community,” said Powell. “Everything I’ve done is not the work of an individual. Anything I do is with the support of people. I’m part of a larger group of people.”