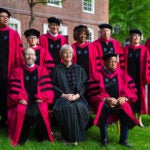 Six new officers have been elected to Harvard University’s Board of Overseers, and another half dozen as directors of the Harvard Alumni Association (HAA).

The six new Overseers are:

Five of the new Overseers were elected for six-year terms. The sixth-place finisher, Diego Rodriguez, will serve the final two years of the unexpired term of Jane Lubchenco, who has stepped down due to professional obligations. The new Overseers were elected from a slate of eight candidates who were nominated by an HAA committee as prescribed by the election rules. Harvard degree holders cast 26,765 ballots in the election.

The primary function of the Board of Overseers is to encourage the University to maintain the highest attainable standards as a place of learning. Drawing on the diverse experience and expertise of its members, the board exerts broad influence over the University’s strategic direction, provides essential counsel to the University’s leadership on priorities and plans, has the power of consent to certain actions (such as election of members of the Harvard Corporation), and directs the visitation process by which a broad array of Harvard Schools and departments are periodically reviewed.

In addition, the six newly elected HAA directors are:

The new directors were each elected for three-year terms. They were chosen from a slate of nine candidates, who were nominated by an HAA committee as prescribed by the election rules. Harvard degree holders cast 27,537 ballots in the election.