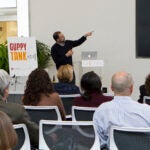 Food for thought on new ideas

In Mary Tate’s native Wisconsin, for every white baby who dies before reaching his or her first birthday, nearly three black babies die.

Tate, who grew up in Kenosha, a city of about 100,000 in the state’s southeastern corner, wants to treat that disadvantage, along with other expressions of the racial and ethnic disparities shown in the U.S. health care system. After graduating from Harvard Medical School (HMS) this spring, she will begin an obstetrics and gynecology (OB-GYN) residency program in Chicago, just an hour’s train ride from home. She will split her time between Northwestern Medicine Prentice Women’s Hospital and the John H. Stroger Jr. Hospital of Cook County which serves as a safety net for disadvantaged neighborhoods.

“I’ll be getting to do the thing I’ve been dreaming about since I was a little girl. I’m over the moon, I’m so excited,” Tate said. “One of the reasons why I came to medicine is I want to take care of people who look like me. I want to think about health inequities for black women.”

Tate, who says one of her goals is to help diversify the face of medicine, credits her academic success to her mother, who continually preached the value of education to her eight children. Tate traces her interest in medicine to the day she asked her mother where babies come from. The response was that an obstetrician delivers them. Tate acknowledges that she was too young to really know what that meant; nonetheless, the idea stuck. She remembers raising her hand during an elementary school what-do-you-want-to-be-when-you-grow-up lesson, and asking, “How do you spell ‘obstetrician’?”

“She is easily the strongest person I know,” Tate said of her mother, Chryel. “She raised us to believe that, with education, we could do whatever we wanted to. I really took that to heart.”

If her mother sparked her initial interest, two of her brothers’ health struggles influenced her thinking about medicine. Her brother Yesha has a severe mental disability that physicians have struggled to diagnose. And while Tate was studying at Dartmouth College, her older brother Yeshayah, 30, fell ill and was hospitalized for months before being diagnosed with the immune disorder Job syndrome which contributed to his death. Over these periods, Tate said, she’s seen both good and bad doctors at work, as well as the limits of medicine and the critical role that physicians play, even when they cannot offer a cure.

“What can we do as physicians when we don’t have a cure to give someone,” Tate asked. “How do we comfort and support a family when we can’t give them a pill to fix what’s going wrong with them?”

She graduated from Dartmouth in 2012 with a bachelor’s degree in biology, and since then Tate has worked to extend her reach, both as a recruiter for the next generation of physicians and to improve care of underserved populations. She worked with mentors at Dartmouth to create “Pathways to Medicine,” a program that supports undergraduates of color with an interest in medicine. The program brings alumni back to the school each term to talk about relevant topics, like applying to medical school or how to succeed in the sciences, and it also offers a summer retreat.

Tate spent a year between Dartmouth and HMS working with the nonprofit One Heart World-Wide, which implements maternal and neonatal mortality prevention programs for underserved populations around the world. She spent time at the organization’s San Francisco headquarters and in Mexico.

Inspired by that experience, Tate sought to create an organization at HMS that emulated One Heart’s community health worker model. She founded a group called Medical Students Offer Maternal Support, or MOMS, which enlists first-year med students to offer support to pregnant women through one of Boston’s community health centers.

Meredith Atkins, assistant professor of medicine at HMS and Beth Israel Deaconess Medical Center, encouraged Tate when she came to her with the MOMS idea, and has continued to advise Tate over her HMS career. Atkins believes Tate is among the leaders of medicine’s next generation, and described her as mature, thoughtful, and able to work with all types of people.

“She’s an awesome human being and we’re really fortunate that she chose to go into medicine,” Atkins said.

As a third-year student, Tate applied for a dual degree program with the Harvard T.H. Chan School of Public Health. She was accepted and delayed her final year of medical school to earn a master’s degree in public health before returning to HMS this year. Her latest outreach effort grew out of her love of theater, singing, dancing, acting, and playing the violin, which she has pursued alongside her science studies. At HMS, a mentor challenged Tate to somehow incorporate those lifelong loves into her medical career. So, in 2017, Tate started the podcast “Dear Premed,” offering advice, interviews, and the latest medical news to pre-med students.

With her residency looming, Tate plans to continue to produce “Dear Premed” and to think about ways to reach out to underserved communities — whether through a similar podcast or through more traditional media — once her training concludes.

“I realized there’s a really great opportunity at the intersection of medicine and media to do some public health work,” Tate said.