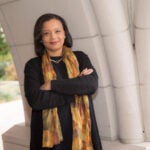 Hinton among 31 recognized with prestigious honor

Elizabeth Hinton, assistant professor of history and of African and African American Studies, has been named a 2018 Carnegie Fellow.

Hinton, who was among 31 awardees who will each receive $200,000 for research focused on Stockton, Calif., home to one of the highest crime rates in the country, called the recognition “overwhelming.”

“Whenever you begin a new research project, you are unsure of exactly how it will be evaluated and if it’s interesting to anyone else. I’m incredibly passionate about this work, so to receive recognition in this way is a tremendous validation,” she said.

Said Dean of Social Science Claudine Gay: “Elizabeth is doing path-breaking work on the history of the carceral state. This award not only is a fitting tribute to what she has already accomplished in her career, but also speaks to the extraordinary promise of her future work on criminal justice.”

Hinton’s award-winning book, “From the War on Poverty to the War on Crime: The Making of Mass Incarceration in America,” studied racism and related law-enforcement policies on a large scale. This award, which will support her next, to-be-named book, zeroes in on Stockton as it works to turn around policies and programs that caused the spiral.

“Stockton provides a powerful lens to examine political and economic transformations in the late 20th century, as well as the dimensions of contemporary racism,” she wrote in her research prospectus.

“Widely regarded in the law-enforcement community as one of the most progressive police chiefs in the country, Jones has taken important strides to improve policing and public safety in the city under the National Network’s guidance. He is the first police chief in the U.S. to begin a process of ‘racial reconciliation’ in his department, whereby officers hold listening sessions with black and Latino residents and take action on grievances,” she wrote.

Vartan Gregorian, president of Carnegie Corp. of New York, said in a statement about all of the winners, who were recognized for scholarship in the humanities and social sciences: “The response to the fellows program gives me great hope for the future of the study of the humanities and the social sciences as a way for this country to learn from the past, understand the present, and devise paths to progress and peace.”