Adichie: ‘Protect and value the truth’ 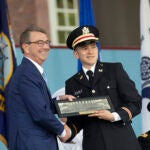 Have the courage to tell the truth. At a time when truth can feel up for grabs and political journalists debate whether to call a lie a lie, award-winning Nigerian novelist Chimamanda Ngozi Adichie stressed the importance of truth during her Class Day speech on Wednesday to graduating Harvard seniors, not just for the nation but for themselves.

“At no time has it felt as urgent as now that we must protect and value the truth,” she said to applause on a gloriously sunny afternoon in Tercentenary Theatre. “The biggest regrets of my life are those times when I did not have the courage to embrace the truth.”

Telling the truth doesn’t mean loudly judging others or starting arguments, and it doesn’t mean that life always works out, because it doesn’t, she cautioned.

Part of the effort involves being able to detect flatterers and manipulators, an important life skill, said Adichie, who was a fellow at the Radcliffe Institute for Advanced Study in 2011-12. “But having that detector means you must also use it on yourself, and sometimes the hardest truths are those we have to tell ourselves,” said Adichie, who recalled how an early manuscript of hers was rejected by publishers and how it took time to face the truth that it simply wasn’t good enough.

Years later, that’s hard to imagine. Adichie’s writing caught the literary world by storm from the start. “Purple Hibiscus,” her 2003 debut novel, and “Half of a Yellow Sun” (2006) were both widely acclaimed. Her 2013 bestseller, “Americanah,” won the National Book Critics Award for fiction. Her writing has appeared in numerous publications, including The New Yorker and Granta. Along with that success, Adichie’s reading from her 2013 essay “We Should All Be Feminists,” questioning the socialization of girls but not boys to value marriage, shot her into the pop culture mainstream after Beyoncé sampled a passage in her hit song “Flawless.”

Adichie acknowledged in her remarks that being honest with ourselves isn’t easy.

Now that college is ending for Harvard’s seniors, telling the truth won’t be quite as easy, she said. The stakes will be higher, and the graduates won’t always find receptive audiences for their views in the real world. Truth-telling will require more mettle, she told the crowd, but do it anyway. And be sure to step back and recognize the “things that get in the way of telling the truth: the empty cleverness, the morally bankrupt irony, the desire to please, the delicate obfuscation and tendency to confuse cynicism for sophistication,” Adichie added.

“Be courageous enough to say ‘I don’t know,’” she said. It’s a simple act that some Harvard grads may find hard given the outsized expectations put on their shoulders. Do it anyway, she urged. “Ignorance acknowledged is an opportunity; ignorance denied is a closed door. And it takes courage to admit to the truth of what you do not know.”

Adichie also gently skewered the educational mission to train future “citizen-leaders.” (“I often wonder who will be led if everyone is supposed to be a leader?”) It’s a term she professed she didn’t quite understand, and one she compared to that sometime dodge about attending Harvard: “I went to school in Boston.” (“That has to be the most immodest form of modesty. Please, Class of 2018, when you are asked where you went to college, just say Harvard.”)

To help find truth, she pressed graduates to “make literature your religion,” by which she meant fiction, poetry, and narrative nonfiction. “Make the human story the center of your understanding of the world,” where people are not abstractions but are “fragile, imperfect, with prides that can be wounded and hearts that can be touched.”

In talking about the obstacles she encounters during her writing process, Adichie reassured seniors that it is perfectly valid to feel a tempest of emotions when they’re pursuing something difficult.

But as important as truth-telling is, it’s not enough, she said. In order for it to make a difference, students must also participate and continue the kind of activism they demonstrated on campus during their Black Lives Matter marches, DACA protests, and the dining workers’ strike, she said.

She urged her listeners to challenge the “stale assumptions” that undergird America’s cultural institutions and tell fresh stories and champion new storytellers “because the universal does not belong to any one group of people. Everybody’s story is potentially universal; it just needs to be told well.” Also, she said, don’t succumb to the urge of comparing your accomplishments to classmates or feel like you’re not measuring up because they’ve reached some arbitrary resume milestone.

“Your story does not have to have a traditional arc,” Adichie said, reciting an Ibo saying that translates to Whenever you wake up, that is your morning.

Rakesh Khurana, the Danoff Dean of Harvard College, also addressed the graduates, the first class that has only known his leadership, and he urged them to consider how they use technology as they move into life.

“When you leave Harvard and find yourself in new situations, facing new challenges without a built-in community surrounding you, it may be harder to avoid the pull of new technology,” he said.

Though it may be tempting and habitual, Khurana warned seniors not to reflexively hide behind screens to avoid stress or uncomfortable situations . He also urged them not to let the lure of technology’s convenience, efficiency, and ubiquity shift their attention away from what’s in front of them and shape and narrow their choices.

“Be the author and owner of your own transformation,” he said.

A small group of seniors were recognized during the Class Day celebration. Harvard orator Jin K. Park and ivy orator Caronia Brettler spoke about the ups and downs of their College experiences. Friends offered memories of Luke Tang and Alex Patel,  class members who died in 2015 and 2017, respectively.

Karely Osorio and Leen Al Kassab were named winners of the Ames Award, which is given to seniors whose display of heroic character and enthusiasm in helping others had gone unacknowledged — but not unnoticed.

Class Day is an intimate, less formal gathering just for the seniors. Fifty years ago, Dr. Martin Luther King Jr. was to be the first student-chosen Class Day speaker but was killed by an assassin in Memphis, Tenn. His widow, Coretta Scott King, spoke in his stead.