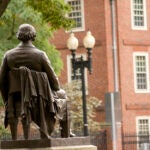 One of the foremost leaders of the Civil Rights Movement, John Lewis has represented Georgia’s fifth district in the U.S. House of Representatives since 1987. The son of Alabama sharecroppers, he is a graduate of both the American Baptist Theological Seminary and Fisk University. Devoted to the philosophy of nonviolence, he organized sit-ins at segregated lunch counters, participated in the Freedom Rides, and chaired the Student Nonviolent Coordinating Committee from 1963 to 1966. He delivered a keynote address at the March on Washington in 1963, organized voter registration drives during the Mississippi Freedom Summer in 1964, and in 1965 led more than 600 peaceful demonstrators across the Edmund Pettus Bridge in Selma, Ala., in what became known as Bloody Sunday. He continued his pursuit of civil rights through work with the Field Foundation, the Voter Education Project, and the federal agency ACTION before his election to the Atlanta City Council and then to Congress. His many honors include the NAACP Spingarn Medal, the John F. Kennedy Profile in Courage Award for Lifetime Achievement, the inaugural LBJ Liberty & Justice for All Award, and the Presidential Medal of Freedom.

A pre-eminent oceanographer, Sallie (Penny) Chisholm is an Institute Professor at the Massachusetts Institute of Technology, where she holds appointments in civil and environmental engineering and in biology. She has conducted pathbreaking research on the marine microbe Prochlorococcus, believed to be the planet’s most abundant photosynthetic organism, which plays an integral role in the global ecosystem and has served as a model for understanding biological systems at different scales. Born in Marquette, Mich., she received her B.A. from Skidmore College and a Ph.D. in biology from the State University of New York at Albany. A member of the National Academy of Sciences, she has written not only scores of scientific papers but also four children’s books on photosynthesis (known as “The Sunlight Series”), two of which have earned awards from the American Association for the Advancement of Science. Past director of both the Earth System Initiative at MIT and the MIT-Woods Hole Oceanographic Institution Joint Program, she has been recognized with such honors as MIT’s James R. Killian Jr. Faculty Achievement Award, the National Academy of Sciences’ Agassiz Medal, and the National Medal of Science.

One of the nation’s most acclaimed poets, Rita Dove is the Commonwealth Professor of English at the University of Virginia. Born in Akron, Ohio, she received her B.A. from Miami University in Ohio and her M.F.A. from the University of Iowa Writers’ Workshop. Celebrated for her lyrical style, narrative power, and attention to the nuances of everyday life, she has published numerous collections of poetry, including the Pulitzer Prize-winning “Thomas and Beulah” (1986), “On the Bus with Rosa Parks” (1999), “Sonata Mulattica” (2009), and “Collected Poems: 1974–2004” (2016). In 1993, she became the youngest person and the first African-American to be named poet laureate of the United States. She is also a novelist, dramatist, essayist, and short story writer, as well as editor of “The Penguin Anthology of Twentieth-Century American Poetry” (2011). Former chancellor of the Academy of American Poets, and the recipient of numerous literary and academic awards, she is one of the few individuals recognized with the highest honors awarded by both the National Endowment for the Arts and the National Endowment for the Humanities.

An esteemed University leader and eminent figure in public health and medicine, Harvey Fineberg is former provost of Harvard University and past president of the Institute of Medicine. Born in Pittsburgh, he received his A.B., M.D., M.P.P., and Ph.D. degrees from Harvard. As a member of Harvard’s faculties of public health and government, he emerged as a noted scholar of health policy and medical decision-making. He served with distinction as dean of the Harvard School of Public Health from 1984 to 1997, then for four years as the University’s provost, playing a key role in fostering cooperation across Harvard’s Schools. He went on to lead the Institute of Medicine, one of the National Academies, from 2002 to 2014. An author of publications on subjects ranging from swine flu to AIDS prevention to medical education, he is currently president of the Gordon and Betty Moore Foundation and recently served as chair of the board of the Carnegie Endowment for International Peace. His honors include the Henry G. Friesen International Prize in Health Research and the Frank A. Calderone Prize in Public Health.

A pivotal figure in his country’s transition from dictatorship to democracy and one of Latin America’s most admired recent leaders, Ricardo Lagos Escobar served as president of Chile from 2000 to 2006. Born in Santiago, he studied law at the University of Chile and received a Ph.D. in economics from Duke University. A distinguished academic, he was secretary-general of the University of Chile. He emerged as a leading figure in opposing the dictatorship of Augusto Pinochet, as founder of the Party for Democracy. Following the defeat of the dictatorship, he served as minister of education and minister of public works before being elected president. His tenure was marked by democratic reforms; efforts to redress economic inequality; investments in education, health care, and housing; and an embrace of international trade. After leaving office, he established the Foundation for Democracy and Development, and has also served as president of the Club de Madrid, a professor at Brown University, and a United Nations Special Envoy on Climate Change. He is author of “The Southern Tiger: Chile’s Fight for a Democratic and Prosperous Future” (2012).

Illustrious composer, scholar, trombonist, and pioneer in experimental music, George Lewis is the Edwin H. Case Professor of American Music at Columbia University, where he long served as director of its Center for Jazz Studies. His innovative work in electronic and computer music, computer-based multimedia installations, and notated and improvisative forms is documented on more than 150 recordings and has been performed by a wide range of leading artists, ensembles, and orchestras. A graduate of Yale with a B.A. in philosophy, he is a longtime member of the Association for the Advancement of Creative Musicians (AACM); the author of “A Power Stronger Than Itself: The AACM and American Experimental Music” (2008), which was recognized with the American Book Award; and composer of the opera “Afterword” (2015), based on the history of the AACM. An eminent musicologist, and recipient of both a MacArthur Fellowship and a Guggenheim Fellowship, he has published widely on improvisation and computer music, and he is co-editor of the two-volume “Oxford Handbook of Critical Improvisation Studies” (2016).

A renowned choreographer, Twyla Tharp is celebrated for works that imaginatively combine different forms of movement and that have expanded the boundaries of modern dance and ballet. A graduate of Barnard College, she founded Twyla Tharp Dance in 1965. A native of Indiana, she studied or performed early in her career with such iconic dance figures as Martha Graham, Merce Cunningham, and Paul Taylor. Over half a century she has choreographed more than 150 works, including 129 dances, 12 television specials, six Hollywood movies, four full-length ballets, four Broadway shows, and two figure-skating routines. Besides choreographing for her own dance company, she has created works for American Ballet Theatre, the Joffrey Ballet, the Paris Opera Ballet, and other premier companies in the United States and abroad. She is author of the autobiography “Push Comes to Shove” (1992) and co-author of both “The Creative Habit” (2003) and “The Collaborative Habit” (2009). A past MacArthur Fellow, she has been recognized with a Tony Award, two Emmy Awards, the Jerome Robbins Award, the Kennedy Center Honors, and the National Medal of Arts.

Wong Kar Wai stands among modern cinema’s most influential auteurs. His films are known for their vivid visual imagery, their nonlinear narratives and complex characters, and their moving evocations of love, longing, and loss. Born in Shanghai, he moved at age 5 to Hong Kong, whose culture figures prominently in many of his movies. His 2000 film “In the Mood for Love,” which he wrote, directed, and produced, is widely regarded as one of the finest motion pictures of the early 21st century. His oeuvre of award-winning films also includes “As Tears Go By” (1988), “Days of Being Wild” (1990), “Chungking Express” (1994), “Fallen Angels” (1995), “Happy Together” (1997), “2046” (2004), and “The Grandmaster” (2013). Past recipient of the best director prize at the Cannes Film Festival, and past president of the juries for the international film festivals in Cannes, Berlin, and Beijing, he has been recognized with numerous honors, including the Stockholm International Film Festival’s Visionary Award, the Grand Lyon Film Festival’s Prix Lumière, and the International Film Festival of India’s Lifetime Achievement Award.