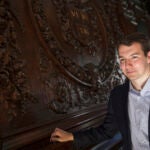 Discovering a 'richness' in Harvard's diversity

Most of us are at least casually familiar with the idea of due process. But technological due process? Ask Priscilla Guo ’18.

The graduating senior and special concentrator in technology, policy, and society just wrapped up her thesis on machine learning algorithms in the criminal justice system. She learned that in 49 of the 50 states, predictive algorithms are used in bail, pretrial and sentencing hearings. In addition to focusing on the crime itself, these algorithms use characteristics like background, hometown, and family environment as predictive factors in rulings.

“The judge receives it directly, and there’s no opportunity for the defendant to say, ‘Hey, this is not a score that reflects who I am,’” says Guo. “Even worse, there’s no consistency. Each state has either developed their own algorithm, or they’ve contracted out to a corporation, which means the defendant can’t see what’s in it because it’s the company’s proprietary software.”

Enter technological due process. Guo suggests that all defendants should receive notice that these algorithms are being used, should be informed of their own score, and should be able to challenge the data on either side of the equation.

“The government should also be testing these algorithms, to see if they’re discriminating against people or if there’s bias in the system,” she says. “And they’re not. Validity testing is done in less than 25 percent of cases. They do one test and say, ‘Oh, this algorithm works,’ which is not how algorithms work, especially in machine learning.”

This use of technology to evaluate state and social systems has been a theme for Guo during her time at Harvard, taking her from the College, to the Berkman Klein Center for Internet & Society at the Law School and the Institute of Politics (IOP) at the Kennedy School.

At the IOP, Guo became involved with STEAM, an initiative that encourages students with concentrations in science, technology, engineering, arts, and mathematics to understand how their areas of study might affect the world by bringing their particular perspectives and skills to political and societal challenges.

“We need to innovate and reignite how we look at research, papers, tools, government, and think tanks through technology,” she says. “Tech has a place in politics, too, such as understanding political advertisements from candidates really speaking to people on an individual level.”

She will carry all of these interests forward as a master’s student at Oxford’s Internet Institute next year after a summer internship with NASA’s Jet Propulsion Laboratory. While at NASA, she will be working on software licensing, intellectual property, and open-source issues relating to her new lab’s strategic software projects. In the past, the lab collaborated on the Defense Advanced Research Projects Agency’s (DARPA’s) Memex initiative, a program that focuses on developing next generation online search software. Tools developed through the initiative are able to index incoming data from a variety of sources, from space probes to finding human trafficking cases on the deep web.

“It’s so exciting to see how connected these things are,” says Guo. “It was the same search extraction tool. They just reapplied the method that they used to search for things in space to search for human trafficking denoters on Google.”

As a high school student, she was a National Teen Advisor for Girl Up, the United Nations Foundation’s effort to empower and support young women around the world, and Girls Write Now, a nonprofit that connects young women with mentors and encourages them to develop their writing skills.

“Having female writers, writers who worked for The Wall Street Journal, or speechwriters for the Rockefeller Foundation telling me that I have a story to tell, that I have a voice, was incredibly important,” says Guo. “Feeling the encouragement from these women I admired to pursue greater achievement, working together to pull women up — that mentorship model really stuck.”

It left a mark on her work in the tech world. She became involved with MIT’s Women in Technology program, attended her first Grace Hopper Celebration, and eventually became president of Harvard’s Women in Computer Science organization. Having had such positive interactions with her mentors, taking on mentees of her own was a no-brainer.

“If you keep bringing more women in, it becomes a positive feedback loop,” says Guo. “One thing that we all have the capability of doing is lift each other up higher.”

As excited as she is for the future, leaving campus this spring is bittersweet. Before she goes, Guo plans to check out all the hidden campus spaces and artifacts she hasn’t yet seen.

“There’s a secret room in the Harvard Art Museums,” she says, referring to the Naumburg Room, which was donated to the Fogg Museum in the 1930s. “They don’t open it up very often, but they have a tea every year and a rotating set of Houses they invite to attend. It has all these secret doors and crevices. The curator knows exactly which buttons to push, like a magical novel, you push one shelf and another pops out!

“Just recently, I had such a Narnia-esque moment. I randomly walked into this library and there was a suit of armor. I was, like, ‘This is so Harvard! Why have I not seen this all four years?’ ”