From heart-sick and road-weary to Harvard 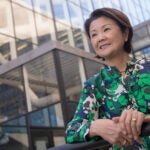 ‘I was confused and inspired. I wanted to do everything’

James Venable knows life can be brutally unfair. But now he also knows such a bitter truth will never define him.

After Venable graduates in May with his bachelor’s degree from the Harvard Extension School, he will head to Yale Divinity School for a master’s in divinity (on a full scholarship). His long-term plan is to return to Harvard for a master’s in theology, and then go on to Princeton University for his doctorate in African-American religion.

“I have strong aspirations” said Venable, whose ambitious goals are partly the product of an early life marked by poverty, loss, and rejection. Where others might have been laid low, Venable has soared, using his suffering “not as a crutch but as a stepping stone. I embraced it … and now people are taking me seriously.”

That yearning for respect and recognition springs from neglected roots. “I’ve learned through the proverbial school of hard knocks,” said Venable on a recent afternoon as he described his childhood in Baltimore, Maryland. His father was in prison when he was born James Louis Taylor in 1972; his mother abandoned him when he was a year old. By his ninth birthday, he had been in six foster homes. Hope arrived with a caring couple, Theodore and Melvina Venable, who adopted him in 1981. A year later, Theodore died from a heart attack. When James was 13, Melvina succumbed to cancer and he moved in with her sister’s family, who he says neglected and abused him. All that pain and adversity “made me what I am today,” Venable said. “I am not bitter but better. I have a strong relationship with the Lord. I am seasoned. I never make excuses. I am quite hard on myself. I am disciplined. I am always pushing myself to do better. … My weakness has become my strength.”

“Those were some arduous times,” he added. “That leaves a lot of scars, when you don’t have anybody in the household to embrace you, to tell you that you can become something great. Rather, they are telling you what you are not.”

School offered little solace. He was eager to learn, he said, but his special education classes gave him nothing to aspire to. “I was not exposed to education excellence with other students who were deemed smart … special education is a particularly cruel fate in a large urban school system like Baltimore.”

Briefly homeless after high school, he took shelter in an abandoned bus in 1991, where he realized “if no one is going to believe in you, you’ve got to believe in yourself.” There were more trying times ahead, but Venable, who had become a born-again Christian when he was 15, knew his faith in himself and in God would sustain him. A traveling job selling cleaning products saved him from the street and taught him to “never take no for an answer.” He also learned to associate himself with “people who are where you are trying to go.”

Later, at the urging of a friend, Venable moved to Texas for college, but he couldn’t afford to finish. More sales jobs followed, as did marriage, in 2003, and his own window-washing business. But the desire to learn never left him. Eager for people to take him seriously, Venable began lying about having a master’s and a doctorate. “I was profoundly discouraged about not having those degrees. I should have had it by then.”

Eventually, Venable realized he needed to be “truthful with himself” and to go back to school. In 2014, he came clean about his fake degrees and enrolled at the Extension School.

“As a born-again believer, I maintain nobody is called to help everybody, but everybody is called to help somebody. I felt the call to become a constructive agent of change to impact the marginalized, the academic, and the religious communities. That’s my calling and my Harvard and Yale educations will prepare and equip me to accomplish that task.”

Since 2015 he has been flying to campus a few times a month from his Texas home, studying subjects including religion, leadership, psychology, and sustainability, and excelling at all of them.

“I got a tutor and I was determined to never make under an A-, and I did.”

Of the hundreds of students Harvard doctoral candidate Kythe Heller has tutored at the Extension School, Venable stood out. “James is the most motivated, the most over-the-top enthusiastic and committed and completely dedicated and remarkable student that I have encountered in all of that time,” said Heller, who worked with Venable in 2015 on how to craft an academic essay. She praised him for creating “a sense of elevation and enthusiasm in his mode of engaging with the world.”

“I really have a sense of someone who has a job to do in this world in a larger capacity and who is willing to do whatever it takes to make that happen.”

“I’ve been blessed to be his thesis adviser here. He has written a magnificent piece of work on religious liberty in America, especially as it relates to black people,” said West. “He writes superbly, he writes clearly, he writes succinctly. His mind is very subtle. He’s got a critical intelligence that one rarely finds in any generation.”

Venable smiled as he reflected on where he been and where he is headed. His ultimate goal, once his schooling is complete, is to become a senior pastor at his own church and spend his days helping lift others up.

“I want for people to take me seriously. I want them to see that Harvard takes me seriously, and that I am taken seriously at Yale. It’s letting people know that my getting here wasn’t a mistake. When I think about it, I still feel it. From there to here, it’s a miracle.”