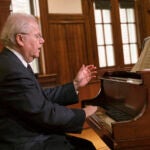 Call it serendipity, if not fate. Some might even credit another, higher power. Benjamin Grimm ’18 only laughs at the coincidences that have shaped his Harvard career.

While he will be receiving his degree in the comparative study of religion with a secondary degree in German and Scandinavian studies, focusing on the Scandinavian side, his talents include photography, musical theater, and ballet, which he studied starting when he was 10. At Harvard, he has acted, sung, and choreographed productions of “Gypsy,” “The Pirates of Penzance,” and “Die Fledermaus,” among others, performing, at times, in drag: “I walk better in high heels than most people I know,” he says.

His love of music, for example, particularly of the Swedish a cappella combo The Real Group, led him to Scandinavian studies. One song in particular, “Så Skimrande Var Aldrig Havet (The Sea Was Never So Shimmering),” moved him.  “I wished I could understand what it meant,” he says, describing using Google Translate to learn it word by word. Once he had placed out of Spanish, he realized he could learn the language of his favorite group at Harvard — and so he did.

Religious studies was another fluke. Although his paternal grandfather is a Methodist minister, Grimm says growing up in an age of global religious extremism had made him antagonistic to organized faith, which he viewed as opposed to modern liberal values. Then freshman year, the lottery left him out of most of his course choices, except for Swedish and psychology. With only one morning to finalize his schedule, he course-shopped classes, spending 20 minutes in each in order to choose before the noon deadline. At 11:30, he ducked into Professor of Comparative Religion and Indian Studies Diana Eck’s “Religion in India: Texts and Traditions in a Complex Society,” his sixth class of the morning.

“I didn’t care about the Gangetic Valley,” Grimm says now, recalling being worn down, and while he was keen on an archaeology class he had sampled, he still needed one more selection. Religion it was.

“I fell in love with it,” he says, laughing. “I was so over my head. I was little white boy from Nowheresville, New York, trying to remember all these names. We read ‘The Mahabharata,’ which has all these crazy lineages. I spent hours in Lamont making diagrams.”

The young man from “Nowheresville” — largely white, rural, and politically conservative Canandaigua, N.Y. — followed up with more advanced courses, and soon religious studies joined Swedish classes and a continued extracurricular interest in the arts. That’s when serendipity stepped in. Sophomore year, for a class on religious pluralism with Eck, Grimm needed a topic for a year-end paper. While he had done in-depth papers on Wicca and paganism and considered writing on Hinduism in India, current events intervened, in the form of the refugee situation in Europe.

“I was reading so much about it,” he says, particularly about the issues facing the growing influx of people from Muslim majority countries into predominantly Christian Sweden.

“I felt so much responsibility,” he says. “Who speaks Swedish? No one. Who studies religion? Not a lot of people. Who studies both Swedish and religion? At the end of that year, [Professor Eck] pressured me into going to Sweden.”

With a grant from the Weatherhead Center for International Affairs and the Minda de Gunzburg Center for European Studies, Grimm traveled as a Williams/Lodge International Government and Public Affairs Fellow to Malmö, Sweden, the first of two summer stays to study Swedish Muslim identity. Specifically, he went to focus on how Muslims experience Sweden, rejecting the traditional ethnographic focus on conflict from the dominant cultural side to look instead at how this newer population is “challenging Sweden to broaden its scope — and how that is being resisted.”

His focus on the interaction between the secular national culture and its Muslim population began as he rode the bus from his in-town apartment to the city’s outskirts, where the city’s largest mosque was located.

As a scholar, he noticed how the changing population negotiated social roles, “from these reticent Swedes who sit three seats apart or willingly stand rather than sit next to someone they don’t know, to the immigrant suburbs, where people are sitting on top of each other and shouting.” In keeping with his arts background, he also began photographing what he saw, from the buttoned down Swedes to the “young South Asian boys in tight fades and Adidas.”

The artistic exploration, he explains, is a natural corollary to his academic studies. “Religion and the arts have so much to do with each other,” says Grimm, pointing out the Christian roots of much choral music and that the Quran is recited verse. This approach, he says, “humanizes religion in a way that I think is too rarely done, because religion is too massive and unruly.”

True to his own multifaceted self, Grimm included photos along with his first-person observations in his thesis.

“This is how you have to study now,” he says. “Here is me, riding a bus in the public sphere: It connects the theoretical with the abstract and, on a more meta level, it connects the divine with the human, which is the whole point of studying religion. It describes these huge unwieldy things we experience in our lives.”

He pauses, as if to resist the obvious conclusion, before adding, “To nurture the connection between the human and the divine.”