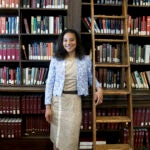 Economist and education scholar will become dean on July 1

Currently, Long is the Saris Professor of Education and Economics at HGSE. She was the School’s academic dean from 2013‒2017 and the faculty director of the research doctoral program from 2010‒2013. She will assume her new role on July 1, succeeding James E. Ryan, who will step down to become president of the University of Virginia.

“Professor Long brings the energy and imagination to create an environment that will nurture new ideas and inspire solutions to some of the most-pressing problems in education,” said Faust. “HGSE’s commitment to producing research and to creating usable knowledge is central to its dedication to students everywhere. Improving educational opportunities for all will mean moving forward with the School’s ambitious agenda to change the methods by which practitioners are trained, while simultaneously deepening understanding of the conditions necessary for learning. Professor Long is extraordinarily capable of leading the School toward these goals.”

“I came to know Bridget Terry Long during my time in residence at the Graduate School of Education,” said President-elect Lawrence S. Bacow. “We share a common interest and passion for improving access to higher education for talented students from families of limited means. I look forward to working closely with her to achieve this goal and to advancing the important work of the School. I could not be more excited about her appointment.”

Long’s research concentrates on the transition from high school to college and beyond, with a special focus on issues related to academic success and affordability. In her scholarship, she has studied the role of financial aid in increasing access to higher education, the effects of postsecondary remediation, and the impact of institutional initiatives aimed at reducing inequality in college outcomes. She is currently studying the influence of information on college preparation and enrollment activities.

President Barack Obama appointed Long in 2010 to the National Board for Education Sciences, the advisory panel of the Institute of Education Sciences at the U.S. Department of Education. She chaired that board from 2011-2013. She is also a research associate of the National Bureau of Economic Research (NBER) and a board director for MDRC, a nonprofit social policy research organization. Long has testified before congressional committees on educational issues.

“I start this new role with gratitude for all that HGSE has given me and a strong sense of purpose that centers on the mission of our School,” said Long. “I’m here because I believe in this community and what we can do together. You can’t help but be inspired by the faculty, students, and staff, who are all working toward the goal of improving the world through education.”

Born in Baltimore and raised in the Midwest, Long received her master’s and doctoral degrees in economics from Harvard and her bachelor’s from Princeton University.

She is board director at the Buckingham Browne & Nichols School. Then-Gov. Deval Patrick of Massachusetts appointed her to the state’s Public Education Nominating Council, and she has also been a visiting fellow at the Federal Reserve Bank of Boston.

Long has won numerous major research grants and awards, including from the Bill & Melinda Gates Foundation, the U.S. Department of Education, and the National Science Foundation. She received the Robert P. Huff Golden Quill Award from the National Association of Student Financial Aid Administrators and a National Academy of Education/Spencer Postdoctoral Fellowship.

“Bridget brings a deep knowledge of and appreciation for the work and mission of the HGSE community, thanks to her experience as academic dean and her many years on the faculty. She is also an exceptional and influential scholar, as well as a remarkably effective teacher and communicator,” said Ryan, who is also Charles William Eliot Professor of Education. “I’m thrilled about this appointment because I know that Bridget will be a wise, caring, and inspiring leader for HGSE in the years ahead.”