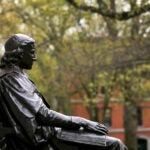 Susan L. Carney ’73, J.D. ’77, a federal appeals court judge, has been elected president of Harvard University’s Board of Overseers for the 2018‒19 academic year.

Gwill E. York ’79, M.B.A. ’84, co-founder and managing director of Lighthouse Capital Partners, will serve as vice chair of the board’s executive committee for the same term.

Elected as Overseers in 2013, Carney and York will serve in the board’s top leadership roles for the final year of their six-year terms. They will succeed Scott A. Abell ’72, retired chair and CEO of Abell & Associates Inc., and Tracy P. Palandjian ’93, M.B.A. ’97, co-founder and CEO of Social Finance Inc.

“Susan Carney and Gwill York have served Harvard and the Board of Overseers with remarkable thoughtfulness, dedication, and care,” said President Drew Faust. “Their leadership and good counsel, along with that of their fellow Overseers, will be of great benefit to Larry Bacow as he looks ahead to his first year in Mass. Hall.”

Carney has been a judge on the U.S. Court of Appeals for the Second Circuit since 2011. Previously, for more than a decade, she was deputy general counsel at Yale University, where her wide-ranging practice encompassed intellectual property law, scientific research and health care matters, international transactions, and litigation related to those and other areas. Earlier, she was associate general counsel of the Peace Corps and a lawyer in private practice. A former law clerk for Judge Levin Campbell of the U.S. Court of Appeals for the First Circuit, she is a member of the American Law Institute and a past member of the board of directors of the National Association of College and University Attorneys.

A Massachusetts native, Carney graduated in 1973 from Harvard and Radcliffe Colleges, where she concentrated in Russian history and literature, and in 1977 from Harvard Law School. Long an active alumna, she is past president of the Harvard Law School Association of Washington, D.C., and a former co-chair of the schools committee of the Harvard Club of Washington, D.C.

As an Overseer, she has chaired the standing committee on humanities and arts, while also serving on the board’s executive and nominating committees, its committee on Schools, the College, and continuing education, and the governing boards’ joint committee on appointments. She has also served on University visiting committees, including those for Harvard Medical School and the School of Dental Medicine, and the Department of Slavic Languages and Literature. She was one of the three Overseer members of Harvard’s presidential search committee in 2017‒18.

Carney lives in Connecticut with her husband, the journalist Lincoln Caplan ’72, J.D. ’76.

York is a managing director of Lighthouse Capital Partners, a venture capital firm based in Cambridge and Menlo Park, Calif., which she co-founded in 1994. She specializes in the financing of early stage technology and health care companies.

A graduate of both Harvard and Radcliffe Colleges and Harvard Business School, York has maintained close ties with a range of Harvard Schools over the years. A past entrepreneur-in-residence at the Business School’s Rock Center for Entrepreneurship, she is currently chair of the Medical School’s board of fellows, head judge of the Business School’s annual business plan contest, a member of the dean’s advisory group for the Harvard John A. Paulson School of Engineering and Applied Sciences, and co-chair of the University’s Boston Major Gifts Committee.

As an Overseer, York co-chairs the governing boards’ joint committee on alumni affairs and development, in addition to serving on the executive committee and the committees on natural and applied sciences and on Schools, the College, and continuing education. She has also been a thoroughly engaged participant on visiting committees, with a wide array of assignments, including the Harvard Art Museums and the Departments of Astronomy, Earth and Planetary Sciences, Germanic Languages and Literatures, and Statistics.

An experienced trustee with close ties to Boston-area cultural and health care institutions, York chairs the board of the Boston Museum of Science and serves on the boards of the Isabella Stewart Gardner Museum (as treasurer), Partners HealthCare, and Brigham and Women’s Hospital. She is also on the board of One Mind, a nonprofit that supports collaborative brain research.

York lives in Cambridge with her husband, Paul Maeder, M.B.A. ’84, who is founder and partner at Highland Capital Partners.