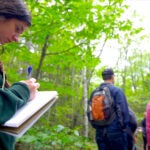 Twice a week, 10 high school students come to the Harvard-Smithsonian Center for Astrophysics (CfA) for four hours of serious science research that takes them to the outer limits.

With space exploration reaching ever farther frontiers and space tourism attracting increasing attention from investors, these talented teens from Cambridge Rindge and Latin School (CRLS) are witnessing a shift in how science is taught — and much of that is due to the CfA’s Science Research Mentoring Program (SRMP).

“The root mission of the Science Research Mentoring Program is to provide high school students with real-life research experience, coupled with mentoring by a living scientist,” said Or Graur, who started the program in September 2017 and is now its director.

“The students get to work on real data using actual astronomical, mathematical, and statistical techniques. That shows them that they can do the work — it’s not rocket science,” said Graur, a National Science Foundation Astronomy & Astrophysics Postdoctoral Fellow at the CfA and a research associate at the American Museum of Natural History in New York. “The program shows them that science is not a distant, impossible profession for them.”

From September through May, the students work on independent projects, discovering new ways of learning, researching solutions, designing codes, and unraveling methods to understand and analyze data while examining theories based on scientific findings.

“So far, students have worked on observations of supernovae and planets outside our own Solar System, simulated dynamics around massive black holes, and applied advanced machine-learning techniques to improve the targeting algorithms of an upcoming galaxy survey,” Graur said.

“We like to say that astrophysics is a gateway science — it’s easy to get students excited about it.”
— Or Graur, founder and director of SRMP

Has that made them feel that they’re ahead of their high school classmates?

“To put it bluntly, yes, most definitely,” said Hansen. “This program provides the bridge between theory and experimentation.”

Hansen described his project as “analyzing a white dwarf star (WD 1145+017) in the Virgo constellation about 570 light-years from Earth” — or about 3.35 quadrillion miles away. The idea and the outline for the project came from CfA Hubble Fellow George Zhou, a postdoctoral researcher who is working with the teenagers.

“The idea is based around George’s current research, and our work is a method of both teaching us and, in a way, helping George to progress further in his own work,” Hansen said. Of special benefit to him and his classmates, he said, has been learning to apply computer programming to real-world research.

Graur said he had worried that, “When you do astronomy, day in and day out, it’s easy to become inured to its majesty and charm,” but Hansen said that despite the volume of concentrated data and the patience required to work through the researchers’ findings, there are plenty of high points to offset the routine.

Sonnert’s part of the work involves “looking for transiting debris disks.” That may not match the grandeur of Graur’s description, but it has thoroughly engaged Sonnert.

Debris disks are collections of dust and debris that orbit a star, and can block some of their light when passing in front. Sonnert said she combs through huge amounts of data searching for the disks; her results, she said, will help scientists determine how common, or how rare, debris disks are.

While Sonnert has yet had no tangible find, Zhou said her work is distinctly not kid stuff. It can take four hours to track an object’s transit, he pointed out.

Comets can be small objects, too hard to detect. Perhaps it’s like looking at a firefly in the vast light, Zhou explained in his analogy.

The students have the use of the Clay Telescope on the roof of the Science Center, where data can be collected. They are also provided laptops, on which they do the majority of their work.

“Every time my code has been successful — such as successfully producing a flux plot — has been a highlight.”
— Jonas Hansen, program participant and CRLS student

Sonnert had to learn how to code in Python to search for the debris disks, and with it she has tallied the number of stars recorded: “I was able to see 66,000 stars,” she said. Athanasopoulos, too, had to learn the programming language, and said that has been the most challenging aspect of the mentoring program.

“I had had very little experience beforehand and I had to pick it up fairly quickly,” she said.

Athanasopoulos’ part of the work focused on “taking data from a binary star system and making/analyzing graphs of elemental lines” in order to create accurate graphs, which would help support previous findings.

She said she would recommend the mentoring program “to any student who is motivated.”

“I enjoy science a lot; however, classes at our high school tend to not be too difficult,” she said. “Being submersed in a work environment where I have to learn for myself on topics I am not very familiar with is much harder.”

Graur said the program could benefit even students with less motivation.

“Most Americans cannot name a living scientist. Moreover, scientists’ portrayal in the media is usually biased toward caricatures, such as those on the ‘Big Bang Theory,’” he said. “This turns students, especially women and people of color, away from academia. So it’s important for teenagers to meet — and work with — actual, living scientists.”

That connection is part of his mandate as an NSF Fellow, for whom the job description includes devoting some time to education and outreach. Graur worked with CRLS astronomy teacher Tal SebellShavit to interview potential students and select the 10 who were accepted, each of whom receives a $1,500 stipend from the city of Cambridge.

Graur said in addition to benefiting the CfA and the students, “For Harvard, this is a way to give back to Cambridge.

“I definitely see this as an ongoing program. My long-term goal is to expand [it] beyond astrophysics,” he said. “We like to say that astrophysics is a gateway science — it’s easy to get students excited about it.

“But for the program to truly keep going … we need a stable source of funding,” Graur explained, adding that the program has received assistance from Harvard, the CfA and its Wolbach Library, the city of Cambridge, members of Rotary Cambridge, and private individuals.

Hansen, Sonnert, and Athanasopoulos will present their projects on May 25, along with their classmates. The other projects are:

Zoe Padilla and Nick Gottschlich Hawthorne — Measuring the light curves (brightness as a function of time) of nearby, very bright supernovae in order to study their explosion mechanisms.

William Daniels — Simulating the effects of a black hole on binary and higher-order star systems.

Applications to be part of next year’s SRMP mentoring program are available online and must be submitted by 5 p.m. on May 11 deadline. For more information, contact Or Graur at or.graur@cfa.harvard.edu.

Nina Livingstone is a Boston-based writer. Contact her at nina@ninalivingstone.com or visit her on Facebook at https://www.facebook.com/destinationmirth/.