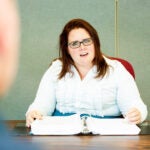 Let me compliment you, sort of

For centuries, people have looked at living things and wondered how they work, why they look the way they do, and how they adapt to changing environments.

Yet despite the enormous strides made in understanding such developments with the advent of such aids as single-cell sequencing, whole-brain imaging, and connectomics, there is still much that biologists do not understand about the systems they study.

To address that gap, Harvard is launching an interdisciplinary research effort called the Quantitative Biology Initiative, with support from University President Drew Faust and Edgerley Family Dean of the Faculty of Arts and Sciences (FAS) Michael D. Smith.

“Harvard has long been a place of cutting-edge scientific research, especially across disciplinary boundaries,” Smith said. “By bringing together faculty working on biological problems with statisticians, mathematicians, and engineers who elicit patterns from the enormous data sets that are now available, this initiative will enable researchers to not only find new ways to take up some of the most fundamental questions in the sciences today, but also to ask completely new questions with the potential to impact the daily lives of people around the globe.”

“The Quantitative Biology Initiative represents an extraordinary opportunity to gain a much deeper understanding of some of the most fundamental problems in the life sciences, problems for which new understanding will only come through collaborations between life scientists and physicists, mathematicians, statisticians, computer scientists, and engineers,” added FAS Dean of Science and Mallinckrodt Professor of Geophysics Jeremy Bloxham.

“As both the dean of the School of Engineering and Applied Sciences and a faculty member in bioengineering with a lab that does computational systems biology, I am doubly excited about this new initiative,” Doyle said. “It builds on the remarkable strengths at Harvard that span and connect engineering, physics, life sciences, and medicine.”

The initiative will tackle fundamental biology questions ranging from how living systems grow, divide, and pattern themselves to how they process information about their surroundings, store information they have learned, and make decisions to thrive and reproduce.

The leaders of the initiative are Vinothan Manoharan, the Wagner Family Professor of Chemical Engineering and professor of physics, and Sharad Ramanathan, the Llura and Gordon Gund Professor of Neurosciences and of Molecular and Cellular Biology and professor of applied physics and stem cell and regenerative biology.

According to Manoharan, the key to answering those questions involves integrating mathematical, statistical, and engineering approaches with biology. For researchers hoping to develop models that can accurately predict the behavior of biological systems, he said, it is imperative that mathematicians and statisticians not only have a seat at the table, but are involved from the beginning.

“New measurement techniques have made it possible for us to see these systems in a way that’s not been possible before,” Manoharan explained. “In the last century, it was possible to measure only a few things at a time, but suddenly we have techniques that allow us to measure tens of thousands.”

“But the challenge now is to make sense of that data,” Ramanathan said. “The complexity of biological systems is enormous. There are tens of thousands of gene expressions, and they change from cell to cell … yet we want to make predictions about how they work, both so we can understand the systems, but also so we can learn how these systems can go awry, giving us a new perspective on disease.”

“We want to approach that complexity head-on,” Manoharan added.  “All the pieces are here at Harvard.”

The new initiative will be built around four pillars. The first will bring together biologists and mathematicians to study how cells make decisions, organize themselves to form tissues and organs, and adapt and evolve in response to their environment. The second is fostering collaborations between biologists and engineers from SEAS to develop new tools and technologies that will allow researchers to make more precise measurements and gather more data on biological systems.

“One challenge that faces the field is that engineers are developing spectacular techniques, but applying them to biology often takes a lot of effort,” Ramanathan said. “What we want to do is work with engineers to develop techniques from the ground up, but also to work with a core set of trained staff members who can translate these techniques and make them into something that is applicable for biology.”

Ramanathan said the initiative will work to develop a set of standards for how data is gathered as a way to ensure that it remains useful for future research. “If the techniques keep changing … it’s hard to have a standardized pipeline,” he said.

To deal with the vast and ever-growing amounts of information generated by increasingly sophisticated techniques and tools, the initiative’s third focus will be on big data analysis, in particular on developing statistical and computational methods to identify the most important information and make inferences based on it.

The initiative’s fourth pillar will focus intensely on training and mentoring the next generation of scientists, who will use the principles of quantitative biology to make fresh and exciting discoveries.

Already, he said, students and postdoctoral fellows are coming together to build a community of cross-disciplinary researchers, and recently launched a series of “chalk talks” in which faculty members discuss their work while students ask questions.

“It’s a way to foster collaboration,” Ramanathan said. “Many faculty believe the next century belongs to the scientists who will not just gather all this data, but can extract principles from it and make predictions.”

“I think we are seeing a natural convergence,” Manoharan said. “Harvard has always been good at working across disciplines, and our biology departments have been exceptional at embracing the physical sciences and the quantitative viewpoint. I see this initiative as building on that and taking it to the next level … where we are all working together from the very beginning.”