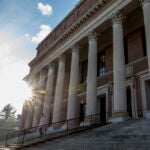 Eleven faculty elected to American Academy of Arts and Sciences

“As we have been reminded all too vividly in recent months, sexual harassment and assault continue to be frustratingly persistent problems on campuses and beyond,” Harvard President Drew Faust said. “Our commitment to creating a Harvard where every member of our community can reach their full potential free from the scourge of sexual misconduct requires that we put in place the resources and structures that will allow us to achieve that goal. That is why I am so pleased to welcome Pierre Berastaín back to campus to take on this important work, and look forward to supporting his efforts at OSAPR to create a community where all can thrive.”

Berastaín returns to Harvard from the National Latin@ Network for Healthy Families and Communities, a federally funded, Latino-specific institute for gender-based violence in the U.S. In his role as assistant director there, Berastaín led multiyear federal grant programs under the U.S. Department of Health and Human Services and the U.S. Department of Justice and conducted training nationally on sexual assault, intimate-partner violence, and stalking. He worked with federal agencies, colleges and universities, state coalitions addressing domestic and sexual violence, shelters, and community programs on violence intervention and prevention initiatives.

“Pierre brings a wealth of policy and practical experience to Harvard,” said Maria Francesconi, acting director for OSAPR and senior director for nursing and health promotion at Harvard University Health Services. “He has proven to be a passionate advocate for civic engagement, the BGLTQ community, and domestic and dating violence survivors.”

As OSAPR director, Berastaín’s responsibilities will include leadership and oversight of advocacy, education, prevention services, and supporting coordination within OSAPR and throughout the University to address the needs of people who have experienced gender-based violence or interpersonal harm.

“I am excited to return to my alma mater, and I am encouraged by the deep level of commitment my colleagues have expressed to create an inclusive, safe, and healthy environment for our community,” he said.

Prior to the National Latin@ Network, Berastaín worked for Renewal House, a domestic violence shelter in Roxbury, as the restorative justice advocate, and was director of media relations for the Hispanic Black Gay Coalition. He co-founded the Massachusetts Restorative Justice Collaborative and served as co-chair of the Massachusetts Gay/Lesbian/Bisexual/Transgender (GLBT) Domestic Violence Coalition. From 2012 to 2013, Berastaín was a fellow at the Gay Lesbian Alliance Against Defamation’s National People of Color Media Institute.

Berastaín was a social anthropology and ethnic studies concentrator at the College and studied gender-based violence and restorative and transformative justice at Harvard Divinity School. While there, he was selected for the Harvard Presidential Public Service Fellowship and focused his work on restorative justice in the context of domestic and sexual violence.

Originally from Peru, Berastaín immigrated to the U.S. with his family in 1998 and was an undocumented immigrant for 14 years. He was a DACA recipient in 2012.

As a contributor to the Huffington Post, Berastaín writes on gender-based violence, immigration, restorative justice, and general issues of social justice. His work has appeared in national and international publications and books. He currently sits on the board of MERGE for Equality, an organization that “engages communities in transforming masculinity to advance gender equality.”

OSAPR seeks to eliminate harm, violence, and oppression through promotion of gender equity and social justice for the Harvard community. Every OSAPR staff member is a certified rape-crisis counselor, committed to the just and compassionate treatment of survivors and their friends, peers, significant others, and allies. OSAPR fosters collaborative relationships between campus and community systems to ensure a survivor-centered, multifaceted approach to advocacy services and primary prevention. It is committed to ending violence against people by addressing gender inequity, social injustice, and oppression at all levels of the social ecology.