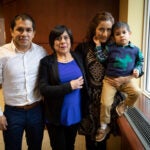 A building that predates the American Revolution, an antique printing press, a community theater converted from a swimming pool, and a hidden courtyard where students can fire up barbecues and eat strawberries while a string quartet plays on the last day of finals, Adams House is one of Harvard’s quirkiest gems.

With its seven buildings set over three city blocks, Adams will be next up in Harvard’s long-term House renewal project, which has seen Dunster House and Winthrop House fully renewed, and Lowell House’s construction underway, and partial renovations at Quincy and Leverett House.

Beginning next year, Adams will undergo a series of significant renovations that, while preserving its history and notable characteristics, will vastly improve its connectivity and accessibility and add many improvements. Ideas for the renovated design plan were unveiled in a House community meeting on Tuesday, when architects presented detailed renderings and answered questions from Adams students, tutors, and faculty deans. Construction is to begin in the summer of 2019.

Among Adams’ treasured assets to be preserved will be the pool theater in Westmorly Court, the Coolidge Room and elliptical stairs in Randolph Hall, the Claverly Hall common and lobby, and the FDR Suite, where future President Franklin Delano Roosevelt lived as an undergraduate at the turn of the 20th century.

“I’m so excited to see Adams House go through the renewal process,” said Mike Smith, Edgerley Family Dean of the Faculty of Arts and Sciences (FAS). “Renewal isn’t just about accessibility and expanded common areas, though those things are clearly important. It’s just as much about engaging the House in thinking about what makes the community unique, what makes it Adams House. It’s great to see the Adams personality coming through in the designs that will be the future of the House.”

During the planning process, administrators will continue to solicit student feedback through discussions and meetings. Among the most frequent responses in initial meetings were interest in maintaining the House’s warm, quirky, and regal characteristics; a desire for updated amenities such as workout spaces, student kitchens, and residential areas; expanded dining and meeting spaces; appropriately sized common areas and dining hall; and special attention for the complex’s unique features, such as the tunnel murals through the basements that connect the buildings.

Currently, the seven buildings feature only one elevator, a small and outdated lift in Claverly. When the project is complete, there will be eight elevators, at least one in every building.

Other improvements include reactivating an existing side door at Claverly to shorten the walk to Randolph, expanding the conservatory adjacent to the dining hall to provide more dining space and connections to a suite of new meeting rooms in Russell Hall, and linking Westmorly Court’s A and B entries directly to Gold Stair Hall, as well as a proposed addition above the dining hall. This rooftop addition has been designed to add student life space while maintaining the dining hall as is.

Merle Bicknell, assistant dean for the FAS Office of Physical Resources, said, “Adams House has so much character and many unique features that are beloved by students and alumni. We are working closely with the House community to ensure that we preserve what is special about Adams House, while meeting the needs of today’s students.”

“Renovating and updating Adams House, one of the crown jewels of Harvard’s House system, has been an extremely engaging and exciting process,” Faculty Deans Judy Palfrey ’67, T. Berry Brazelton Professor of Pediatrics at Harvard Medical School, and Sean Palfrey ’67, said in a statement. “The architects seem to be as invested and enthusiastic about doing this in innovative and creative ways as we are. We have a great group of students, staff, and alums thinking about it, and we are confident that the new Adams House will have the flavor and quirkiness of the old Adams House while being a great deal more accessible and smoothly functioning.”

“Each House renewal project comes with a distinct set of challenges and opportunities,” said Elizabeth Leber, a partner at Beyer Blinder Belle, the architect and design firm overseeing the work. “Adams House is a particularly exciting project for us, in that it occupies some of the oldest and most historically significant buildings in the House system, with architectural details that are about as unique and extraordinary as the Adams House culture.”