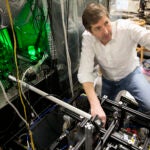 Liu Zhenya has a vision for revolutionizing not just how we produce energy, but also how we share it.

The talk, “The Art of Energy Revolution: From Ultra-High-Voltage Power Grid to Global Energy Interconnection,” was sponsored by the Harvard-China Project, East Asian Legal Studies, and Harvard Global Institute.

Since 2004, Liu has been working with colleagues on ultra-high-voltage (UHV) electricity transmission. Initially proposed to solve energy shortages in his rapidly growing country, such transmission is, in Liu’s words, “a key technology for ultra-large energy grids,” several of which are now functional in China. Highly efficient, the technology can transport more electricity over longer distances, effectively revolutionizing the practicality of green power and enabling outreach to underserved areas.

“UHV tech has become a symbol of Chinese innovation,” noted Liu, speaking through a translator.

This domestic breakthrough is only the first step, he said. Liu discussed the potential for UHV technologies — and new advances currently being worked on — to enable the next step: global energy interdependence. Such a grid would transmit power generated by solar, wind, and water around the world, allowing energy-ravenous cities to utilize currently inaccessible clean resources. (Liu noted that solar energy in 7.7 percent of the Sahara Desert could meet global energy needs.)

It would also allow underdeveloped and developing nations to access the same resources and bypass the traditional carbon-heavy stages of burning coal, wood, or manure, effectively helping to balance income inequality on a global scale.

Global energy interdependence holds promise to “push the world out of fossil-energy dependence and overcome resource shortages, environmental pollution, and climate change,” Liu said. “It will ultimately provide solutions to the problems of global energy development.”

A global grid, he continued, would be “jointly constructed and mutually beneficial to all.” Ultimately consisting of nine latitudinal and nine longitudinal lines that would span continents and oceans, he said this “smart grid” would be “the foundation that allows the distribution of clean energy sources, optimizes utilization, and fulfills the diversified needs of end users.”

Of course, such a grid would face both technological and political challenges. It also would require extensive rebuilding of existing grids. Liu explained how even in North America different systems are used between the U.S. and Mexico and the U.S. and Canada. In addition, as noted in a post-talk Q&A, a global grid would likely stir fears of energy vulnerability.

“Yes, there will be hackers,” answered Liu. “There are countries that don’t get along. But will the U.S. turn off the internet to Russia? No, because it’s to its advantage to keep it open. When you encounter these problems you can address them.”

Economics should also help sway doubters, he said. Total investment related to power generation and power grids of GEI is approximately $38 trillion, including $27 trillion on power generation, and $390 billion on transnational and transcontinental power grids. The investment could stimulate the global economy to increase by an estimated 0.2 percent annually, and reduce the average electricity tariff by 2.8 cents/kWh, compared with the current level.

Listing the energy goals of the Paris climate agreement, Liu said that a global grid “would promote world peace and harmony, because we could go from competing for fossil fuel sources to being cooperative.”