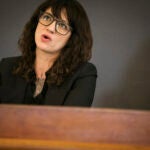 Getting the record straight

Lance Oppenheim, based at Harvard the past three years, has never let his camera stray too far from a sense of home.

A junior concentrating in Visual and Environmental Studies, Oppenheim will premiere his latest film, “The Happiest Guy in the World,” at the Tribeca Film Festival on Thursday. The 10-minute documentary gives a glimpse into the life of Mario Salcedo, who has lived aboard a cruise ship for two decades.

“Adopting a cruise-ship life is basically escaping from reality,” Salcedo says in the film. “You are basically exiting the world as you know it on land and you are saying, ‘I don’t want to be a part of it anymore.’ I want to create my own little world and I want to be away from all the issues that come up with being on land.”

In an email interview, Salcedo said Oppenheim offered him a unique opportunity.

“How could you turn down a Harvard student? I would regret it later. There was no doubt in my mind, as our conversations progressed before the project was launched, that Lance was truly passionate about undertaking this assignment.”

Oppenheim’s enthusiasm for film began in his own swampy backyard. Growing up in Southwest Ranches, Fla., he found the perfect setting for his budding movie obsession in the Everglades.

“Since I was 6, I would spend hours watching movies and music videos, memorizing extremely trivial information about production budgets and MPAA ratings,” said Oppenheim, who as a fourth-grader dressed up as Steven Spielberg, as opposed to, say, E.T., for Halloween. “While other kids were going out for sports teams and trading ‘Yu-Gi-Oh!’ cards, I was already a 40-year-old, fedora-wearing film snob.

“Growing up on a faux-ranch swamp populated by cows, I was always fascinated by how many Floridas existed outside of the romanticized, sunny Florida image. It seemed like there were so many stranger-than-fiction stories, and that trying to do justice to someone else’s story would be far more interesting than attempting to rip off my favorite Darren Aronofsky movies.”

“The Dogmatic,” which he directed at age 16, tells the story of a group of nail technicians turned vigilante dog rescuers.

“They would break into very dangerous people’s homes and steal back dogs that had been taken in by these drug peddlers, horse-meat smugglers, pretty much the very people that choose to live in a place like the Everglades for the sole reason of not wanting to be found,” Oppenheim said. “They used knives and guns and ripped through people’s fences. They probably thought I was some kid who barely knew how to use a camera and the film wouldn’t get seen, but Vimeo ended up naming the film a staff pick. It got more than 55,000 views — way more than the 100 or so friends with whom I had shared the film.”

Enrolling at Harvard, he immersed himself in VES courses, including Ross McElwee’s yearlong “Introduction to Nonfiction Filmmaking” — “one of the best experiences I’ve ever had,” Oppenheim said. As a student in “Documentary Fictions,” taught by Joana Pimenta, he started work on “Happiest Guy.”

“I tend to shoot my films prior to determining what my aim or target aim truly is,” he said. “This class made me slow down. We worked with 16 mm film, and just being able to have the opportunity to work with celluloid was incredible. Being the intermediary forces you to become one with what you are shooting. It made me very aware of how I deal with people.”

McElwee, set to serve as Oppenheim’s senior thesis adviser, was impressed by the young filmmaker from the start.

“Lance was no beginner, but he dove into the course and worked hard with his classmates to make a compelling film centered on a high school theater production,” he said. “He has a driving curiosity about other people’s lives — a great attribute for a documentary filmmaker — as well as tremendous drive and confidence in himself.”

Oppenheim’s sister, Melissa ’12, who works at Facebook, produced “Happiest Guy,” which The New York Times plans to post on May 1. The Times has featured two other Oppenheim works. The first, “Long-Term Parking,” told the story of airline workers living in a parking lot at Los Angeles World Airports. Last December, “No Jail Time: The Movie” focused on defense attorneys who create tear-jerking documentaries to sway the court.

“A lot of my films are inspired by the work of my parents,” Oppenheim said. “During the recession, my parents — both real-estate attorneys — were forced to transition from representing home builders to people losing their homes. These stories implanted an idea that I continue to explore with my work, of just what a home truly means today, both in Florida and across the country.”

Though he’ll turn to a longer-form documentary this summer, Oppenheim feels confident that 10 minutes with his “Happiest Guy” will give viewers plenty of time to consider Salcedo’s choices — as well as deeper questions of fantasy and facade.

“Mario is a god on the sea, a cruising king,” he said. “I admire what he’s done with his life, shirking from responsibility to do what he’s always wanted to do, but also living a life filled with paradoxes. Everyone’s a visitor and he’s always permanent.

“The challenge of the film was trying to figure out what keeps him away from returning to land, but then I realized his fantasy had taken on a reality of its own, and that it was in that freedom that Mario had finally found home.”