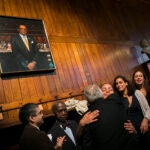 A lasting legacy, now on view

Microsoft founder Bill Gates stopped by the Harvard John A. Paulson School of Engineering and Applied Sciences (SEAS) campus on Thursday afternoon, where he chatted with some of the same sorts of tech-savvy students that he once was as a Harvard undergrad.

“The work here is taking robotics in many dimensions and in different realms,” Gates said later during a relaxed back-and-forth conversation with Doyle and a Q&A session with students at the Science Center. “I saw a variety of robots that are really amazing, and … the collaboration between the various teams was amazing to see.”

Gates also spoke about his storied career building Microsoft after initially spying a home computer ad in the pages of an electronics magazine in his room at Currier House. In addition, he  talked about his more recent work leading a private charitable foundation that focuses on global health and education, and he reminisced about his time at the College.

Gates, 62, famously dropped out of the College in 1975 to co-found Microsoft. He received an honorary law degree from the University in 2007, three decades after his class graduated.

Gates said he initially came to Harvard with a great many interests and a voracious appetite for learning but was not very focused in the early days. He said he had a tendency to sign up for classes and then only show up for the final exams, much like a Freudian recurring dream, because he was busy attending other courses instead. “I took all these courses because it was just so amazing!” he marveled.

Asked if he had any regrets from his student days, Gates said he wished he had been “more sociable” and had mixed with a wider array of classmates instead of focusing so intently on his work and on writing computer code. He recalled how his much more outgoing friend Steve Ballmer, who lived down the hall at Currier House and who would join Microsoft in 1980, liked to push him to cut loose every once in a while.

Gates said he was happy hanging around Currier House, where he could get hamburgers at every meal and where the male to female student ratio was 1:1, which was unusual at the time. “It didn’t help me, but it was an improvement,” he said to laughter. “I was just so into being good at the classes and taking lots of classes. It worked out it the end, but I missed a lot.”

Turning to broader topics, Gates, who has overseen the Bill & Melinda Gates Foundation since stepping down as Microsoft chairman in 2014, said that the most significant challenge facing the world is malnutrition. In this country, the biggest challenge is the quality of the educational system.

The Gates Foundation has spent billions on programs around the country to raise the quality of teaching in public education, boost research funding, make curricula more effective, and help students with special needs.

“We’re spending $800 million a year. And [on] our goal, which was to move the average quality of U.S. education up into that top three, we have no noticeable impact after almost 20 years,” he said candidly. “But we’re committed; we’re going to keep doing it.”

On issues such as climate change and genetically modified organisms, Gates said it is difficult to push meaningful change forward now because so few people —politicians as well as everyday Americans — have basic science literacy. When people don’t see the immediate effect of something, it’s hard to motivate them to do something different, he said, but even that is not the real hurdle.

“It’s the anti-science that’s a problem,” he said. “We need to push back.”

Gates also said that if he were in College now, he’d be focused on artificial intelligence.

“I think, if anything, it’s a more interesting time to be lucky enough to be a student at Harvard. The ability to take innovation and solve problems, including the classic problems I’ll call ‘inequity problems’ ” — such as income or education or health inequality — “these are very tough problems, and they’ve eluded being solved.

“So, whether it’s health costs or climate change or robots that do good things and not bad things, or the policies around those things, this is a fascinating time to be alive.”