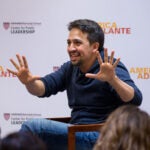 As a boy in Dayton, Ohio, James Reis used to beg his father to take him for Sunday walks around the local pond. He’d use his butterfly net and science books to learn about the plants and animals he encountered.

Fast-forward to 2015, and Reis, then a budding photographer living in Jamaica Plain, was still taking nature walks on weekends, but in the Arnold Arboretum with his wife. He’d exchanged his butterfly net for a camera, but hadn’t stopped collecting elements of nature for closer observation.

In 2016, he showed some of his photos to Sheryl White, the Arboretum’s coordinator of visitor engagement, who encouraged him to take more close-ups to set his work apart.

Reis seemed to have an eye for microenvironments, White says. And as the muse of many a shutterbug, the Arboretum is already the frequent subject of landscape photos.

Reis tightened his focus, and the resulting images comprise an exhibit called “Close and Closer” on display at the Arboretum through May 6. The following gallery is just a sampling of Reis’ camerawork.

The photographer will be leading a walk and talk at the Arboretum on April 29.

“No two days are the same, between the angle of the sun, the weather. … While my lens is a frail approximation of eye and heart, it pulls me out the door, and into the delicate realms of plant, fungi, insect, and seed.”
— James Reis