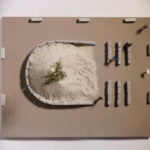 A shape-shifting design for Radcliffe Yard

As a budding curator, Elizabeth Keto ’18 wants to show art in all its diversity

Poised and articulate, Elizabeth Keto makes an impression. And she’s been doing that for two years in her role as a student guide at the Harvard Art Museums.

Her self-designed gallery tour — featuring such seemingly disparate objects as an Assyrian wall relief, a British “abolitionist” milk jug, and photographs by contemporary American artist LaToya Ruby Frazier — is intended to prompt reflection and conversations, even difficult ones.

“My tour asks how art has been used to support or reinforce power, what kinds of politics can have a form in art, and the efficacy of art in producing change,” said Keto, who graduates in May with a concentration in the history of art and architecture. “It’s a tour that resonates with me, and I hope it opens up others’ experiences in the museums.”

The recipient of a 2018 Marshall Scholarship, Keto will pursue master’s degrees in art history and curatorial studies at the Courtauld Institute of Art in London. She hopes to someday be a curator focused on making museums more representative of diverse artists and more welcoming to visitors of all backgrounds.

“Our country is in the middle of this crucial moment around issues of inclusion and diversity,” said Keto one morning amid the bustle of the museums’ courtyard. “I want to help museums reinforce those values, so that any visitor can see some aspect of her life represented.”

Keto said she’s noticed that many people aren’t fully at ease in front of art — even when they’re taking a tour.

“People can be intimidated by the museum space, and it can be tough sometimes to get them talking,” Keto said. “But everyone has something interesting or insightful to say; people just need the confidence to speak up.”

Growing up in Washington, D.C., Keto visited cultural institutions frequently and found her confidence there and on forays into drawing and painting.

Early in high school, she participated in a National Gallery of Art program designed to introduce students to careers in art and museums. “We talked to everyone from curators to the conservators who make frames,” Keto said. “At the end of it, I realized you can do this as a career.”

Some of Keto’s passion may run in the family. Her paternal grandmother — her namesake, who died just months before Elizabeth was born — painted and trained as an art historian, and as a retiree guided tours at the National Gallery. “I grew up with the sense that [art] had mattered deeply to someone in my family, and it was always something my parents were open to,” Keto said. “It’s almost like I’ve found out more about [my grandmother] through studying art history. I’ll tell my dad about something I’m studying and he’ll say, ‘I remember my mom talking about that.’”

The Class of 2018 experienced the transformed Harvard Art Museums for all their four years on campus; the museums reopened in November 2014 following a major renovation and expansion. Access to art has been critical to Keto’s undergraduate experience; she’s been in the museums at least once a week since she arrived as a freshman.

The people Keto meets on her tours serve as both inspiration and sources of knowledge. On one early tour, she spoke to groups about American artist Robert Smullyan Sloan’s painting “Negro Soldier” (1945). A visitor identified himself as a veteran, and then explained the symbolism of the soldier’s ribbons in the painting. “You never know what people are bringing with them,” Keto said. “I always end each tour excited to be able to tell even more to the next group.”

That’s no surprise to David Odo, the museums’ director of student programs. “Elizabeth has from the beginning of her involvement with the museums been one of the most intellectually engaged, creative, reliable, and hard-working students I have ever known,” he said.

“The museums have been an integral part of my education … a space of learning, discovery, and inspiration.”
— Elizabeth Keto '18

Keto has served as director of the Harvard Student Art Show and as a tutor for children through the Mission Hill Afterschool Program and the Phillips Brooks House Association. Her involvement, she says, is a way to remind herself “how important it is to engage people of all backgrounds and any level of experience.”

While she hasn’t completely settled on a focus for her postgraduate studies, Keto gravitates toward contemporary art. She likes the idea of “writing the first draft” of art history, ensuring that new scholarship reflects the diversity of today’s world.

She’s been inspired in this effort by Sarah Lewis, assistant professor in the Departments of History of Art and Architecture (HAA) and African and African American Studies. “Professor Lewis has led me to think about how works of art can help expand the boundaries of citizenship,” said Keto, who is currently taking Lewis’s Picturing America seminar.

Lewis, a former Marshall Scholar herself, said she is thrilled to see Keto embark on such a journey. “Elizabeth is attuned to the power of curatorial practice for the creation of public narratives — statements that we make through exhibitions about who counts and who belongs; and not only in the discourse in the field of art history, but in civil society,” Lewis said.

Keto’s senior thesis focused on the work of Hanne Darboven (1941–2009), an understudied German artist who lived in New York and was friends with Sol LeWitt and other well-known conceptualists. Keto worked to place Darboven in the context of conceptual art, and analyzed how her art challenges the usual understanding of the genre. Keto’s research involved a visit to Darboven’s home in Hamburg, Germany, funded by an Abramson Traveling Fellowship from HAA.

Her final thesis is “one of the most comprehensive theoretical approaches to Darboven I have ever read,” said Benjamin Buchloh, the Andrew W. Mellon Professor of Modern Art and Keto’s thesis adviser. “I hope she publishes it soon because the literature on Darboven is very scarce. It would be a major contribution.”

Over the summer, Keto will work as an intern in the photography department at the Museum of Modern Art in New York. Then it’s off to the Courtauld — a destination that’s “been a dream for a long time,” she said.

Even the Marshall Scholarship has fit Keto’s aspirations. “The Marshall is about cooperation, diplomacy, building trust across borders,” she said, “and that’s something I think museums can also be a part of, promoting cultural diplomacy and building understanding.”