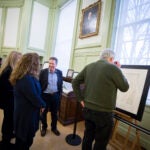 Spring festival celebrates with four days of performances, including ‘Antigone’ in the stadium

It is only fitting that as Harvard builds its new campus in Allston, the arts community would quickly follow.

Arts First, the annual spring festival that begins Thursday, will make its debut on the other side of the river with concerts, exhibitions, and a historic work of theater that Harvard hasn’t seen in 35 years.

“This year’s Arts First has everything from dance and drama to music, spoken word, film, and studio art. It’s a four-day arts blowout bookended by three free incredible events: a conversation with Pulitzer Prize winner Colson Whitehead ’91, a concert with pianist André Watts and the Harvard-Radcliffe Orchestra, and ‘Antigone,’ which is only the second time in a century that a Greek drama has been staged in that iconic locale” of classically inspired Harvard Stadium, said Jack Megan, director of Office for the Arts.

Continuing the 26-year tradition of Arts First, the expanded programming will showcase the work of faculty, students, and honored guests in four days of performances, exhibitions, installations, and events of every musical and visual genre.

Perhaps most ambitious is the student-produced staging of “Antigone,” the ancient Greek drama by Sophocles, in Harvard Stadium Sunday at 6:30 p.m.

The goal, said Roy, was a play that would “use clear language, without requiring any mental gymnastics to understand it.”

“We wanted it to be a text that was accessible,” said Roy. “Some translations have arcane, dense language that would have been hard to work with,” he said.

Brooks, who will play the title role, recalled Polonsky’s long-held dream of staging live theater in the country’s oldest stadium.

“Mitchell has been scheming about the stadium since freshman year. I specifically remember his being somewhat resentful that football is such a community event in this country, but no one goes to the theater,” she said.

Polonsky noted that at one time it was a near-annual tradition to stage a giant show for the community, with audiences in the tens of thousands.

“There used to be a real feeling of coming together. That’s something we feel has been sucked out of the theater today. Community was central to the world of Greek tragedy. Originally these plays would have been mandatory for everyone to attend. If you couldn’t afford to take off work, the government would pay for you to go. (A special fund called the theorika subsidized theater and festival attendance for poor citizens.) They were social events, political events, spiritual events,” he said.

Seven actors constitute the cast, with 10 additional chorus members and another 30 in the choir. There are 20 students on the production team, and Scottish-born artist Claire Ashley loaned the students 36 inflatable sculptures (some more than 10 feet in size) for the performance.

“They’re colorful and fun in some sense, but also very oddly sinister,” said Polonsky. “Her work is evocative to us of Greek mountains and bodies on a battlefield.”

Brooks, who has performed in nearly a dozen productions on campus, including as Sally Bowles in “Cabaret,” said “Antigone” presents a unique challenge.

“It’s difficult as a performer to fill the weight, the scope of language like that. But in the first rehearsal at the stadium, it felt exactly right. I felt what the words were doing in a way I had never had before. I wasn’t just speaking them, but speaking to fill that space,” she said.

“Antigone” will conclude a day of events that begins with the unveiling of a new mural by Harlem-based artist Paul Deo at the Harvard Ed Portal. On Sunday afternoon, an all-female group of singer-songwriters, including Harvard Graduate School of Education student Melissa Ferrick, Asia Stewart ’18, and Avanti Nagral ’20, will take the stage for a concert at The Grove.

“The music industry has long been dominated by men. Celebrating women singer-songwriters is something I’m very appreciative Harvard is trying to do,” said Nagral, a student in the dual-degree program with Berklee College of Music who has long been performing her brand of pop-soul across the world.

Highlights of the weekend include:

For a complete listing of events, visit https://ofa.fas.harvard.edu/arts.