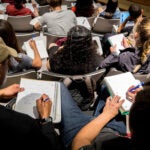 Their intellectual interests range from the neurobiological basis of social behaviors to the engineering of biological tissues to the social and psychological effects of natural disasters. But the four faculty members recently awarded Arts and Sciences Professorships have some important things in common: excellence in leadership, teaching, and scholarly achievement.

Michael D. Smith, Edgerley Family Dean of the Faculty of Arts and Sciences (FAS), created the professorship program at the beginning of the Harvard Campaign for Arts and Sciences to recognize scholarly achievement at the highest level within FAS. Established through generous donor gifts, the chair appointments, which provide support for faculty-related costs as well as research funding, are awarded on a rotating basis for five-year terms.

“These appointments … enable us to publicly recognize our most esteemed colleagues,” said Smith. “These pioneering members of our faculty are outstanding leaders in their fields and contribute in inestimable ways to the truly unique learning environment in the FAS.”

Here are capsule looks at the professors and the work they do:

Catherine Dulac, Lee and Ezpeleta Professor of Arts and Sciences

Dulac’s lab uses cutting-edge molecular and genetic tools to study how the brain controls social behavior. Over the next five years, she and a team of Harvard scientists plan to catalog the cell types in the brains of mice and determine which genes each type uses, thanks to a $65.4 million grant from the National Institutes of Health’s Brain Research through Advancing Innovative Neurotechnologies (BRAIN) Initiative.

Dulac formerly was chair of the Department of Molecular and Cellular Biology and is a Howard Hughes Medical Institute investigator, but she says it is her interactions with students, particularly undergraduates, that offer the greatest rewards.

“It is extraordinarily gratifying to see young minds beginning their research and becoming completely involved in scientific discovery,” she said. “The rewards of teaching come from the moments when I am interacting with students in the classroom or at the bench, discussing the beauty of a particular scientific question, and I can feel this student developing their own new ideas and enjoying the progress that is scientific discovery.

“Being a faculty member at Harvard means many things — research, teaching, and being part of the community. I have tried in my career to excel in all of these activities,” she said. “It has been immensely enjoyable, and I take great pleasure in the sense of community it has created.”

“This honor means a great deal to me, as it not only recognizes my own research and teaching contributions but those of my research group and our collaborators,” said Lewis, a pioneer in the fields of materials science, bioengineering, robotics, and 3-D printing.

“I love introducing students to the foundational concepts that govern the structure, properties, and processing of biomaterials as well as their myriad applications, including contact lenses, hip implants, and drug delivery,” she said. “It is especially rewarding when you see your students making connections between these applications and the underlying scientific principles at play.”

In 2017, Lewis was elected to the National Academy of Engineering for her research on the design and fabrication of functional, structural, and biological materials. She is an inventor with dozens of pending or issued patents, founder of the startup company that commercialized the first multimaterial 3-D printing for fabrication of embedded electronics, and a core faculty member at the Wyss Institute for Biologically Inspired Engineering.

“I was very surprised to receive the letter from Mike Smith informing me of this appointment,” said Menand, a Pulitzer Prize winner who is widely considered one of the foremost modern scholars of American studies. “I can think of many colleagues who are more deserving of recognition, but I am of course very grateful to Mike and to everyone else in University Hall for naming me.”

Menand is the author of “The Metaphysical Club,” a detailed history of American intellectual and philosophical life in the 19th and 20th centuries, which won the Pulitzer and the Francis Parkman Prize in 2002. He is currently writing a book on postwar cultural history, and will use the funds awarded by this professorship to further his research on the topic.

“I came to Harvard, in 2003, in hopes of becoming involved in academic development, and I have been fortunate from almost my first year here to be asked to participate in curricular initiatives and advise on administrative matters,” Menand said. “I have many people to thank for these opportunities, including Larry Summers, Bill Kirby, Drew Faust, Mike Smith, Rakesh Khurana, Diana Sorensen, Robin Kelsey, Jay Harris, and the chairs of my own department, most recently Nicholas Watson. I am also grateful for the friendship and support of my colleagues in the English department.”

In September 2016, President Barack Obama awarded Menand the National Humanities Medal in acknowledgment of his contributions to the study of cultural history. In its award citation, the National Endowment for the Humanities said Menand’s “influential works of intellectual and cultural history probe the power of ideas from one era to the next as they ripple across politics and culture.”

Menand is a staff writer for The New Yorker and a former contributor to The New York Review of Books.

“I love two-way interactions with my students,” Waters said. “I am pleased when I can share my knowledge and thinking with them on subjects that are important to their lives. And I learn so much from my students, who are just brilliant and bring so much experience and curiosity as well as critical thinking to the classroom, and to our discussions outside the classroom. Everyone from first-semester freshmen to my dissertation advisees has so much to teach me.”

The author or co-author of 11 books and more than 75 articles, Waters has focused on issues of immigration, intergroup relations, and racial and ethnic identity. She is a principal investigator on the Resilience in Survivors of Katrina (RISK) project, a longitudinal study that traces the impact of the Hurricane Katrina disaster on more than 1,000 African-American single mothers from New Orleans whose families now live in 37 different states.

“I value this recognition and support by the University very much,” she said of the new appointment. “Academic work has a long time horizon and it’s easy to focus on the rejections and the false starts and the blind alleys that every scholar encounters. Recognition like this is a giant boost of energy.”

The first Arts and Sciences professorship was awarded in 2013 to Jeff Lichtman, the Jeremy R. Knowles Professor of Molecular and Cellular Biology. Lichtman was named the Santiago Ramón y Cajal Professor of Arts and Sciences in recognition of his status as a world leader in using advanced imaging techniques to study the wiring of the brain and nervous system. Lichtman’s chair was created through a gift from Kewsong Lee ’86, M.B.A. ’90, and his wife, Zita J. Ezpeleta ’88, J.D. ’91. Dulac will be the second holder of this chair.

“Through the generosity of our alumni who have provided the funding for these Arts and Sciences Professorships, we are able today to recognize the leadership of these five individuals,” Smith said. “These remarkable scholars truly exemplify the best of all that we do.”