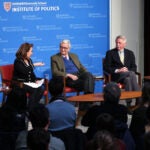 Growing up in northern New Jersey, David Gruber would ride his BMX bike to the Passaic River. He ducked under waterfalls, fished for sunfish, and scrutinized tiny worms and crustaceans that clung to his skin when he emerged from the brownish water. He didn’t know their proper names back then.

He also didn’t know that a century of industrial activity had laced the Passaic with dioxin, PCBs, heavy metals, and pesticides. Later, when Gruber was pursuing a Ph.D. at Rutgers University, he considered coming up with toxin-eating bacteria to help clean up the Passaic — by then one of the biggest Superfund sites in EPA history.

He opted instead to study oceanography, but poking around the river and surfing off the Jersey shore fed Gruber’s fascination with water and an almost transcendental belief that we are inextricably tied to the natural world.

Gruber plans to delicately read and decode the genetic libraries from living jellyfish and other deep-sea marine life that could lead to new biomedical tools and treatments. And he hopes to explore what’s causing jellyfish populations around the globe to proliferate out of control.

“Is it true,” he muses, “that climate change is leading to the takeover of the oceans by jellyfish zombies?”

“They’re incredibly delicate. They seem so simple, yet they’re complex. They’re little packets of water that can do miraculous things. They have lots of charisma, if we dig in.”
— David Gruber, pictured below with jellyfish specimens in the Museum of Comparative Zoology

The intersection of humans and jellyfish

In 2013, Gruber was in a submarine in the depths of the South Pacific, peering at the exotic world outside the sub’s clear acrylic dome. Every species that swam or drifted by was new to him. It was, he says, like being a kid in a candy shop.

A professor of biology at City University of New York and a research associate of invertebrate zoology at New York’s American Museum of Natural History, Gruber has collected fluorescent proteins from fantastical, glowing creatures he’s uncovered in remote depths of the Pacific, the Red Sea, the Mediterranean, and undersea canyons off California.

Since these kinds of proteins were first discovered, in the 1960s, they’ve been used to track cancer cells, illuminate how pancreatic cells produce insulin, and display brain circuits working in real time. Yet little is known about what the glowing proteins do for the creatures that generate them.

Jellyfish themselves are an enigma. The term encompasses thousands of species that combine plantlike simplicity, animal-like mobility, and an almost bacterial ability to reproduce rapidly, according to the biologist Juliet Lamb.

Gruber is devoting his year as a Radcliffe Fellow to writing a book on what he calls the intersection of humans and jellyfish. He’s exploring their history, biomedical applications, and potential as a human food source, as well as their alarming ability to thrive — like rats or cockroaches — under certain conditions. In recent years, enormous jellyfish blooms have closed beaches, damaged trawlers, decimated fish stocks, and clogged power plants.

Gruber, more of a jellyfish champion than a detractor, seems delighted to have become “the jellyfish guy” to Institute colleagues. They’ve told him about vacation-ruining stings at the beach and screensavers featuring undulating jellies. These conversations can become dialogues, he says, that focus attention on marine life in a new light.

Blue light, specifically. Beyond the reach of sunlight in the ocean depths, it’s a blue spectral world. Gruber started out studying bioluminescent coral reefs. But a glimpse of an elusive green glowing eel off the Cayman Islands in 2011 changed that.

In submarines, using remotely operated vehicles and extended-range SCUBA wielding special blue lights, Gruber and his colleagues have descended 1,000 meters in search of what he calls the world’s most cryptic sea life: sharks and fish and sea turtles covered in fluorescent green, orange, and red patterns and sparkly spots. He’s filmed underwater light shows of creatures that for some reason have developed the ability to absorb blue light energy and transform it into myriad other colors.

The uses of bioluminescence

In the 1990s, the gene for green fluorescent protein (GFP) in a common North American jellyfish was cloned. If the harmless genetic marker was attached to a protein of interest, researchers could see a distinctive green glow when the protein became active.

Biofluorescence, Gruber says, is a powerful tool that happened to be floating around in the ocean. Its research uses seem almost infinite. The new fluorescent protein Gruber uncovered in the eel, for instance, is very different from GFP, which earned its discoverers a Nobel Prize in 2008.

The eel protein lights up when it binds to fatty acids such as bilirubin, a key blood compound that helps clear waste products generated by the breakdown of aged red blood cells. That protein and others isolated from the more than 200 new species of biofluorescent fish Gruber uncovered may lead to additional tools for medical research. One found in a coral in Australia is already being employed to develop better cancer drugs.

Gruber is also exploring the little-understood bioluminescence chemical pathway by which these creatures produce light and why their systems devote limited resources to spectacular body paint that only certain eyes can see. Perhaps, he speculates, it aids in communication, mating, or camouflage.

He has a notion of mimicking a tiny, harpoon-like appendage — employed by the marine species Cnidaria to project a hollow, venom-filled needle with explosive force — to gather genetic samples from deep-sea creatures.

To better understand how sea creatures experience their worlds, Gruber tries to imagine himself enshrouded in perpetual darkness. To emulate how a jellyfish or a shark or a sea turtle sees its glowing compatriots, he creates lenses that mimic their eyes.

“I see these intertwined, interdisciplinary aspects of life,” Gruber says. “Studying light and creatures who are conduits of light is a really alluring way for me to follow that thread of life.”

As he talks about never-before-seen biofluorescent organisms, Gruber’s hands trace shapes in the air, freezing mid-gesture as he searches for the right word. He sports metal-rimmed spectacles reminiscent of those of a 19th-century naturalist.

After squeaking through high school, Gruber chose the University of Rhode Island for its surfing team. And after a turbulent summer unloading trucks for a factory, he figured he’d better choose a different path. New Jersey’s industrial landscapes and strip malls represented a “disconnection from nature,” he says. “I was searching for nature wherever I could find it.”

As a college senior, he jumped at an opportunity to participate in an oceanography expedition to Belize. He lived in a tent on a tiny island where conch fishermen taught him to free dive and navigate by the stars in search of nocturnal fish in seagrass habitats. Later, he studied biodiversity in the jungles of Guyana and worked to restore the Everglades near Key Largo.

He joined the CUNY faculty in 2008. He wonders if he paid a price early in his academic career by being “too broad,” he says. But now his varied background helps him see unexpected connections: how phytoplankton are integral to the study of human aging, for instance, and how the scientific narrative of evolution informs almost everything.

Soon after Gruber was named a National Geographic Society Emerging Explorer in 2014, he presented his work in Washington, D.C. He talked about studying bioluminescence, which is like trying to study gasoline after combustion: Once the reaction has occurred, evidence that it existed is gone.

Despite their resilience in the wild, jellyfish are notoriously difficult to cultivate. Gruber once spent months in a hotel, dashing to the Mystic Aquarium in Connecticut at all hours, coaxing baby jellyfish to thrive in a lab tank, tweaking their diet in the hope that they would produce more light.

After the talk, the Harvard roboticist Robert J. Wood, one of the other NatGeo Explorers, approached him. Have you heard of soft robotics? Wood asked. Gruber hadn’t, but he immediately recognized its potential for collecting deep-sea marine samples noninvasively.

He and Wood are collaborating this year in the Harvard Microrobotics Laboratory to create squishy-fingered robot hands that can grasp a jellyfish without harming it. In the spring, they hope to test their devices on living jellyfish in Boston Harbor, following the lead of the Harvard naturalist Louis Agassiz, who researched jellyfish off Nahant in the 1850s.

Much more has been learned about jellyfish physiology since Agassiz’s time. The creatures have sleep cycles, just as we do, Gruber points out, and senses. They have eyes and a knack for sophisticated navigation. With uncanny efficiency and balletic grace, they propel away from predators.

“They’re incredibly delicate,” he says. “They seem so simple, yet they’re complex. They’re little packets of water that can do miraculous things,” such as descend to depths that would crush a titanium submarine. “They have lots of charisma, if we dig in.”

Gruber holds a glass jar containing a cannonball jellyfish, a specimen Agassiz brought back from Georgia, which is stored in the bowels of the Harvard Museum of Comparative Zoology. Inside the jar a colorless gelatinous blob sloshes in clear liquid, its bell devoid of the lacy pattern it had when alive. It seems a gigantic theoretical leap to say, as Gruber does, that humans and jellyfish simply diverged from a common evolutionary path.

Jellyfish or river organism or fellow vertebrate — at the end of the day, we have many commonalities, and we all share DNA. Humans have nearly 70 percent of the same genes as sponges. But if we look only with our human eyes, Gruber insists, we miss the point.

He pauses, gazing over my head as if zeroing in on something only he can see.