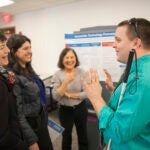 Rhode Island Gov. Gina M. Raimondo ’93 has been elected by her classmates to serve as chief marshal of the alumni at Harvard’s 367th Commencement Exercises on May 24.

“I’m honored to have been selected by my classmates to represent such a distinguished group of alumni. I look forward to reconnecting with this remarkable class and returning to Harvard’s campus,” Raimondo said.

The 25th reunion class has selected the chief marshal from among its ranks since 1899. In addition to leading the afternoon alumni procession into Tercentenary Theatre, the chief marshal hosts a lunch for dignitaries and guests in Widener Library.

In 2010, Raimondo was elected as the general treasurer of Rhode Island. She served in this role for four years, spearheading landmark reforms to the state’s underfunded pension system, before successfully running for governor — becoming the first woman to hold the office.

Named by Fortune magazine as one of the world’s 50 greatest leaders in 2016, Raimondo has prioritized economic growth and job creation as governor, leading to a substantial reduction in the state’s unemployment rate. She has also made investments in all levels of education, from pre-kindergarten to workforce training, including a new scholarship program that offers tuition-free community college to high school graduates.

“Gov. Raimondo has been a bold and innovative leader for the state of Rhode Island, and we are proud to have such a dedicated public servant leading the alumni as our chief marshal,” said Harvard Alumni Association President Susan Morris Novick ’85.