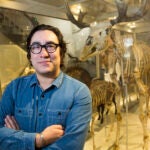 Brian Farrell, Irina Ferreras to assume their posts in July

“I’m so excited to welcome Brian and Irina, two extraordinary members of our community, into these roles,” Khurana said. “Both of them have a longstanding commitment to teaching, inclusivity, and building community among students and colleagues. I am confident that they will be a great addition to Leverett House.” The couple will succeed Howard and Ann Georgi and begin their duties July 1.

Farrell is director of the David Rockefeller Center for Latin American Studies and professor of biology, Department of Organismic and Evolutionary Biology. He is also curator in entomology at the Museum of Comparative Zoology. A native Vermonter, he earned his B.A. in zoology and botany from the University of Vermont and his M.S. and Ph.D. from the University of Maryland.

As part of his graduate work, he undertook extensive expeditions in the Peruvian Amazon region with the Smithsonian Institution, and in southern Mexico. After graduate school, he was awarded an Alfred P. Sloan Foundation postdoctoral fellowship in molecular evolution at Cornell University. His molecular phylogenetics lab focused on insect-plant coevolution and is known for fundamental discoveries about evolutionary rates of diversification, including the Jurassic-aged interactions between gymnosperms and beetles present today in the world’s austral regions.

Inspired by his transformative experiences in field courses as an undergraduate, Farrell has included field trips in every course he has taught. While an assistant professor at the University of Colorado, Boulder, he led undergraduates on spring break trips to the Sea of Cortez. Farrell returned to the East Coast in 1995 as professor of organismic and evolutionary biology and curator of entomology at Harvard. He was a Fulbright Scholar during his 2011–2012 sabbatical to the Universidad Autónoma de Santo Domingo, where he built a biodiversity lab in collaboration with professors there. The lab continues to host Dominican and Harvard students.

For the past 20 years, Farrell has headed a course, “Foundations of Biological Diversity,” which has about 100 students. The class includes labs and field trips to natural areas, and helped inspire the undergraduate arts and science journal Ecdysis. Farrell also offers a freshman seminar on acoustic biology and the evolution of music, and he plays jazz drums. Of the dozen senior theses he has directed, four have won the Hoopes Prize, which recognizes students for excellence in scholarly work and research.

Ferreras is curatorial assistant in the Oakes Ames Herbarium of Harvard University Herbaria, a post she has held for 20 years. Born in the Dominican Republic, where she earned an engineering degree from the Universidad Pedro Henríquez Ureña, she came to the U.S. on a US-AID scholarship and earned a master’s degree in horticulture from the University of Maryland. Ferreras organized the synchronized swimming events at the 2003 Pan American Games, held in Santo Domingo, and was a coach of the Dominican Republic national synchronized swimming team in the 1984 Olympics in Los Angeles.

Farrell and Ferreras edited the bilingual conservation book “Hispaniola,” published by Harvard University Press, and co-curated the itinerant Dominican art exhibit TRE. They have worked together in recent years to provide a summer school study-abroad program exploring the cloud forests and coral reefs of the Dominican Republic. They have also jointly led six Harvard Alumni Association trips to Latin America and Africa.

Their daughter, Gabriela, graduated in Harvard’s Class of ’16, and their son, Diego, is a member of the Class of 2022.

“Leverett House will flourish under the leadership of Brian and Irina,” said Dean of Freshmen Tom Dingman. “Their warmth, experience leading a summer school program in the Dominican Republic, and special interests involving music and the natural world make them ideally suited for these important roles.”

“We’re absolutely thrilled to have the opportunity to become the next faculty deans of Leverett House and honored to serve the Leverett community,” Farrell and Ferreras said in a joint statement. “We’re excited to share our passions, and we look forward to working closely with the students, tutors, and staff. The Georgis’ shoes will be hard to fill, but we are ready and eager for the challenge and our communal adventure ahead!”