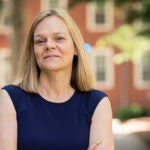 Dench named dean of Graduate School of Arts and Sciences

BERGEN, Norway — Harvard legal scholar Cass Sunstein has been named this year’s winner of the Holberg Prize, one of the largest international awards given to an outstanding researcher in the arts and humanities, the social sciences, law, or theology.

Sunstein, the Robert Walmsley University Professor at Harvard Law School, is being given the prize for his wide-ranging, original, prolific, and influential research. Not only has his research redefined several academic fields, but it has had far-reaching impact on public policy. His scholarship spans behavioral economics and public policy, constitutional law and democratic theory, legal theory and jurisprudence, administrative law, and the regulation of risk.

In particular, Sunstein’s academic work has reshaped understanding of the relationship between the modern regulatory state and constitutional law. He is widely regarded as the leading scholar of administrative law in the United States, and is by far the most cited legal scholar in the country.

For four decades, Sunstein has combined his scholarly contributions with a range of public activities and participation in open debate. He has influenced thinking on some of the most pressing issues of the time, from climate change and free speech to health issues.

He will receive the award of $765,000 during a formal ceremony at the University of Bergen, Norway, on June 6.

Describing the key purpose of his work, Sunstein said, “I have long been concerned with how to promote enduring constitutional ideals — freedom, dignity, equality, self-government, the rule of law — under contemporary circumstances, which include large bureaucracies that sometimes promote, and sometimes threaten, those ideals.

“The main goal has been to deepen the foundations of democratic theory for the modern era, and to understand in practical terms how democracies might succeed in helping to make people’s lives better — and longer.”

Sunstein has published 48 books and hundreds of scholarly articles. The books “After the Rights Revolution” (1990) and “The Partial Constitution” (1993) are considered his major works on American constitutional law, and explore how related ideals can be reworked and defended in the face of the challenges posed by the rise of the administrative state. “Impeachment: A Citizen’s Guide” (2018) emphasizes the importance of self-government and of human dignity, linking those to republican ideals and the power of impeachment.

In “The Cost-Benefit State” (2002), “Risk and Reason” (2002), “The Laws of Fear” (2005), and “The Cost- Benefit Revolution” (forthcoming in 2018), he shows the ways in which cost-benefit analyses may discipline regulatory agencies. These works seek to bridge the gaps between deliberative ideals, distributive justice, human rights, and the demands of efficiency. “Legal Reasoning and Political Conflict” (1996; second edition 2018) is his most ambitious work on jurisprudence, the rule of law, and legal theory, emphasizing how law often reflects “incompletely theorized agreements,” which enable people to live together despite disagreement or uncertainty about the most fundamental questions.

Sunstein won the Goldsmith Book Prize for “Democracy and the Problem of Free Speech” (1993), in which he argued the need to reformulate U.S. First Amendment law. The book says that it is necessary to move away from the conception of free speech as a marketplace, in order to “reinvigorate processes of democratic deliberation, by ensuring greater attention to public issues and greater diversity of views.”

His work on self-government, free speech, and modern technologies, culminating in “#Republic: Divided Democracy in the Age of Social Media” (2017), explores the problem of echo chambers and social polarization. It argues for the importance of common spaces and unchosen, serendipitous encounters with problems and ideas.

In 1998, Sunstein broke new ground, together with Richard Thaler and Christine Jolls, with the paper “A Behavioral Approach to Law and Economics,” which initiated an academic field called behavioral law and economics. Sunstein and Thaler followed up with the best-selling book “Nudge: Improving Decisions about Health, Wealth, and Happiness” in 2008. The book discusses how public and private organizations can help people make better choices in their daily lives, and it helped popularize and cement the influence of behavioral law and economics.

“The Ethics of Influence” (2016) investigates ethical constraints on the uses of behavioral science, with reference to ideals of autonomy and welfare. Another forthcoming book, “Unleashed: Behavioral Economics in the Wild” (2019), will argue that private preferences are constrained by social norms, and that when such constraints begin to lift, social change can be quite rapid — for better or for worse.

“Cass Sunstein’s work is animated by a profound sense of the ways in which human behavior poses a challenge for regulation,” said Pratap Bhanu Mehta, chair of the Holberg Committee. “Moreover, in addition to his contribution to the academic field, he has also mastered the art of communicating difficult and important ideas to the public. His work is rigorous yet accessible, and marked by an extraordinary concern for human welfare as well as a commitment to an enlightened public discourse. Sunstein is one of the great intellectuals of our time.”

In 2008, he joined the faculty of Harvard Law School as the director of its program on risk regulation. From 2009 to 2012, Sunstein was administrator of the White House Office of Information and Regulatory Affairs. He returned to Harvard in 2012 as Felix Frankfurter Professor of Law until 2013, when he became Robert Walmsley University Professor. He is founder and director of the Program on Behavioral Economics and Public Policy.

Sunstein was elected a member of American Law Institute in 1990 and of the American Academy of Arts and Sciences in 1992. In 2017, he was elected corresponding fellow of the British Academy. He has won the Regulatory Innovation Award (Burton Foundation, 2012), the Henderson Prize (Harvard Law School, 2002), the Certificate of Merit Award of American Bar Association (1991), and the Award of American Bar Association for best scholarship in administrative law (1978, 1989, 1999). He has honorary doctorates from Copenhagen Business School and Erasmus University.

Sunstein’s government service includes membership on President Barack Obama’s Review Group on Intelligence and Communications Technologies (2013) and the U.S. Department of Defense’s Innovation Board (2016‒2017). He has also served on several committees, including the Institute of Medicine Committee (2004‒2005) and the Presidential Advisory Committee on the Public Service Obligations of Digital Television (1997‒1998).

With George Akerlof and Adam Oliver, he is co-founder and co-editor of Behavioural Public Policy. In addition, he has contributed to constitution-making and law-reform activities in many countries. Sunstein has been on the boards of editors for Studies in American Political Development, the Journal of Political Philosophy, and Constitutional Political Economy. He has also been a contributing editor to The American Prospect and The New Republic.