Honored or not, these films won critic’s heart 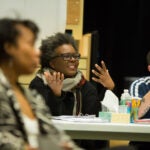 The topic is race, onstage and afterward

Ahead of Oscars, New York magazine’s David Edelstein ’81 talks up favorite movie moments of past year

As an undergraduate, David Edelstein ’81 could often be found at The Harvard Crimson, fine-tuning his very first film reviews. Today Edelstein reviews movies for New York magazine (as chief film critic), National Public Radio’s “Fresh Air,” and “CBS Sunday Morning.” Ahead of Sunday’s Academy Awards ceremony, we asked him about his favorite films of the past year.

EDELSTEIN: Some years it’s really a struggle when my magazine says, “What’s the best film of the year?” Sometimes it’s between two, sometimes it’s between three — except for this year. This year by leaps my favorite film was “The Florida Project,” and it was completely passed over except for [best supporting actor nominee] Willem Dafoe, who will lose, unfortunately. … I thought it was as close to a masterpiece as anything I have seen in the last five years. And to me the fact that the voters in the Academy didn’t get it is a very sad judgment on them.

GAZETTE: Is there a performance that was totally overlooked by the Academy this year?

EDELSTEIN: There was a movie about Emily Dickinson, “A Quiet Passion,” by Terence Davies, who is just a brilliant English filmmaker. I didn’t like the script of the movie at all, but I thought what Cynthia Nixon did with Dickinson was transcendent, and that’s a word I use very knowingly based on my courses at Harvard about what the Transcendentalists meant and what Emily Dickinson meant. … Nixon is a miraculous actress. Everybody knows how good she is, but nobody seems to know how great she is.

GAZETTE: Aside from your top 10, can you name two or three movies that people probably haven’t seen but should?

EDELSTEIN: Documentaries sometimes do get recognized for Academy Awards, but they don’t cross over. When you see a movie like “Last Men in Aleppo,” or another movie that got overlooked, “Nowhere to Hide,” you see we are so cut off from the impact of our bombs, literally and metaphorically.

GAZETTE: What is the Oscar category that gets the least attention but has the biggest impact on a film?

EDELSTEIN: It really depends on the film. Different directors utilize different contributions. A lot of times really, really great editing is editing that you don’t see. Music can haunt you in ways that you aren’t even aware of — you are not conscious of how the music is working on you.

It extends to performances. What wins the award for performances is acting you can see — it’s impersonations, it’s Meryl Streep, it’s people playing mentally or physically disabled people, transforming themselves according to some biopic idea, as in “Darkest Hour,” the Winston Churchill movie. It’s very rare that they will come along and give an award to acting that is just kind of behaving, what Willem Dafoe does in “The Florida Project.” You can’t see the acting but it’s all there. Forty years, 50 years of brilliant work on stage and in film. Some of it’s very theatrical, some of it’s very clairvoyant. He’s in that performance and yet it doesn’t register as “great acting.”

Streep is very often brilliant, very often deserves all the love, but it’s not my favorite kind of film acting. Actually an actress who I am surprised has the kind of the love that she does is Saoirse Ronan because with her you can’t see the acting. She’s just perfect. She has never given a less than brilliant performance. And I am very happy she is getting attention.

GAZETTE: Which nominated film do you think will take home the top prize?

EDELSTEIN: It looks like “Three Billboards Outside Ebbing, Missouri” is going to win. I don’t know why. I was surprised that movie seems to work as well as it does with audiences because it’s such as mess. [Writer-director] Martin McDonagh is a superb playwright and I love his plays but I think he is really plugged into the Irish and British psyche in a way that he is not plugged into the Ebbing, Missouri, psyche.

GAZETTE: What do you consider your role is as a film critic?

EDELSTEIN: A good critic will watch and will listen to other members of the audience and say to themselves, “Huh, they are really responding to this and I’m not, why am I not?” At the same time, it’s about bringing the reader into my journey, into my process, and, I hope, capturing the essence of a great performance, or a great performer, or thinking about the ways in which an artist sees the world and wants to translate the world for the rest of us to experience.

For example, you will see a movie like “The Shape of Water,” and you will see so much of [director] Guillermo del Toro’s love of movies, all the themes, as a kid all the longings he had, all the dreams he had, all the romantic dreams and the works of art that sort of informed his psyche and that power his soul, that made him want to be a film critic, that made him want to live more fully, and the ways in which he was politically engaged. He put all of that into “The Shape of Water,” which is why it strikes a chord in so many people and why to me it seems completely secondhand and didn’t affect me in the least in those ways. Because I see all that, I know exactly what he was responding to, but it didn’t, for me, jump the left-brain barrier. It did not get into my bloodstream. However, he might well win best director and many people swoon [over the film] and are really thrilled with it. So it’s a complicated process. I could make a case for “The Shape of Water,” a very passionate case for it. And I think if you are a critic, you should be able to make a case for something even if you are going to tear it down.