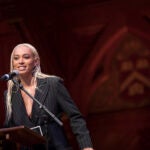 E.O. Wilson, in his latest book, thinks the combination is overdue

Like Raymond Carver’s blind man in “Cathedral,” the entomologist Edward O. Wilson inspires readers to regard the world through an entirely uncommon lens, never more so than in his latest book, “The Origins of Creativity.”

What Wilson, a two-time Pulitzer Prize winner and University Research Professor Emeritus, has accomplished in the natural sciences fills volumes — he recently completed his 34th book.

In “Origins,” however, Wilson shifts toward a more philosophical endeavor, urging the next generation of great minds to evolve and explore the symmetry between the natural sciences and the humanities. He urges a return to philosophy in an era when societies are “drowning in information, starved for wisdom.”

He recently talked with the Gazette about his new book, its themes, and more.

GAZETTE: What advice do you have for young scientists?

WILSON: Don’t stick with what you did your thesis on. Use it as a springboard, as a new frontier to the sciences. Go find a collaborator who is symmetrical to you in ambition and learning. You can teach your new co-worker as the colleague teaches you. Together you can formulate something really new. Often I’ve had my co-author give me a new way of thinking I wouldn’t have had. I would suggest to young people to look for that blank space of the frontier. The successful scientist follows the opposite of the military dictum — that is, to march to the sounds of the drum. The ambitious scientist seeks solitude to go where he doesn’t hear the sounds of the drum.

GAZETTE: At what point in your career did you recognize the contribution of creative thinking, inspired by the humanities, in your own work?

WILSON: When I became a junior fellow (in Harvard’s Society of Fellows). Fellows were selected very carefully, from all subjects, humanities and sciences. There were only eight of us chosen with evidence of promising creativity. The junior fellows met twice a week, Wednesdays and on the weekend for a very elaborate dinner based on British formal customs. At the close of the first dinner, the oath was read to the junior fellows. The oath was essentially: You may go anywhere you wish, you may do anything you want, but during this time, we have only one requirement — you must do something extraordinary.

It was what we should give every bright gifted scholar. I traveled to New Guinea to study ants, and after I returned I went from junior fellow to assistant professor. I spent a couple of years using the material I learned in New Guinea. Then I collaborated with Robert MacArthur on “The Theory of Island Biogeography.” We produced the book in 1967. Having satisfied some of my appetite, I turned my attention to a book on how we would organize everything we know about social insects. How can we talk about them, and how can we think about them?

I decided what I would do was create a new discipline. I had a new grad student, Stuart Altman, whose specialty was rhesus monkeys. We went into the field to study monkey behavior. During that time, we had long talks about how we could join what he knew about rhesus monkeys, and I was loaded with information about insects. There must be common principles. So I did say, I think we ought to have new a new discipline, sociobiology. I then set to work. One of the things I was doing over the next 11 years was creating sociobiology.

By 1969‒1970, I put together a book about all of the insects I was studying, “The Insect Societies,” published by Harvard University Press in 1971. In it, I outlined in the opening chapters what sociobiology could be and how it was linked with biology and, to some extent, the humanities. It really was quite a success.

Then I turned to doing a book that included all vertebrates, including humans. “Sociobiology: The New Synthesis” was published in 1975. Then “On Human Nature” (1978): That was the book where I very carefully connected sociobiology with neurobiology and evolutionary biology, that was the connection between biology, the natural sciences, and the humanities.

GAZETTE: One observation in your new book is jarring: Discovery is completely a human story, its telling is a human achievement, and scientific knowledge is a product of the human brain. Does science exist outside of human consciousness?

WILSON: Yes, if you are willing to delete the word “human.” Science exists. It exists where intelligent life has evolved.

Is science constant, no matter the lens? In principle, if we define science, you would expect science develops everywhere. We just don’t make known the fact that this could be one way of stating a group of principles and descriptions, except as follows. The humanities live in a tiny sensory bubble: audiovisual. Most orders on Earth live primarily with pheromones — that is chemical. It is nearly universal. And it is beyond human perception.

The humanities have remained stubborn in their thinking: audiovisual. And … we are pretty skilled in audiovisual. We stay within a tiny sliver of the electromagnetic spectrum. We can’t see infrared and ultraviolet, but they are there. Writers stop around the origin of literacy. The most creative trip for writers and artists would be to explore how could you translate that, how could you break out.

GAZETTE:  At its core, “The Origins of Creativity” is a philosophical treatise. Are we in an age of enlightenment?

WILSON: No, not yet. Crisis will force the next enlightenment. We not only will do more but should do a lot more to synthesize the humanities with science to study biodiversity. We will. We have to do it. The biodiversity crisis, it is the loss of the genetic library. We have the right conditions. If we had the right initiatives from creative artists, if those initiatives were directed toward a message, if they could engage but also inspire, we could.