Dench named dean of Graduate School of Arts and Sciences 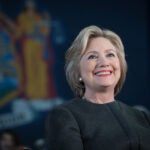 History and classics professor turns her gaze from past to future

By her own account, Emma Dench was a strong-willed child who was fascinated with mortality, with languages, and with roaming the English countryside exploring ancient churches and ruins during her father’s travels with the Royal Shakespeare Company.

It was one particular jaunt to South West England when she was 7 that helped set Dench on her career path to the past.

“I learned to swim in a Roman bath. It was amazing. I had been trying to swim for ages, and I actually cracked it there, in Bath,” said Dench, McLean Professor of Ancient and Modern History and of the Classics at Harvard and interim dean of Harvard’s Graduate School of Arts and Sciences (GSAS).

On July 1, Dench will take on the deanship full time, and in the process turn her attention from studying the past to planning the future.

Dench will replace Xiao-Li Meng, the Whipple V. N. Jones Professor of Statistics, who was dean for five years and is stepping down to join the Harvard Data Science Initiative.

“Emma’s distinguished scholarship and her deep devotion to teaching, learning, mentoring, and helping undergraduate and graduate students excel at Harvard and beyond has been the hallmark of her tenure as McLean Professor of Ancient and Modern History and of the Classics, and as interim dean of the Graduate School of Arts and Sciences,” said Michael D. Smith, Edgerley Family Dean of the Faculty of Arts and Sciences.

“In her short time as interim dean, she has won the respect of her faculty colleagues and GSAS staff with her thoughtful outreach, her steady guidance, and her ability to forge creative and practical solutions to meet the needs of students. She is a proven leader whose broad appreciation of the needs of students, nuanced understanding of the School’s operations and challenges, collaborative approach, dedication, and commitment will help further the GSAS’s mission of advancing knowledge and innovation, supporting groundbreaking research, and prepping graduate students for success beyond Harvard’s gates.”

“Emma Dench is an inspired choice to lead the GSAS. She is deeply committed to teaching and learning, and to supporting students and faculty who engage every day in the work of developing ideas, expanding understanding, and advancing discovery,” said Harvard President Drew Faust. “It also has been a pleasure to work alongside Xiao-Li Meng to advance some of the highest ideals of higher education. He brought to the role a keen awareness that the women and men of GSAS represent the future of knowledge and, indeed, the future of universities.”

“In her short time as interim dean, she has won the respect of her faculty colleagues and GSAS staff with her thoughtful outreach, her steady guidance, and her ability to forge creative and practical solutions to meet the needs of students.”
— Michael D. Smith

Dench’s early trips to the ancient pool and to prehistoric sites (including landmarks that may have involved human sacrifice) both terrified and intrigued the child, whose fixation with mortality began at age 5. “I thought everybody lived to 100, and so I would think I’ve only got 95 years to live.”

The exposure “to this very ancient history fed my morbidity,” she said, and her curiosity, laying the foundation for her lifelong love of antiquity. Throughout her career, Dench has used her historian’s eye to explore how the Greeks and the Romans viewed other cultures and in turn how those civilizations viewed themselves. She sees such scholarship as offering up important lessons that will be useful in her new role.

“I would never advise anyone to be like the Romans, but I would tell them to use the problems that the Romans grappled with to better understand how we grapple with our own,” said Dench, who did exactly that during an elective M.B.A. course at Harvard Business School (HBS) in 2015 that she taught with HBS Professor Frances Frei. The pair used writings by Julius Caesar, Marcus Aurelius, and Seneca the Younger, among others, to spark class discussions with aspiring CEOs about ambition, power, and leadership.

“Absolutely every ancient writing about the Roman empire is grappling with the sorts of issues that any organization grapples with. What is leadership? How do you develop a sense of direction? How do you develop a strategy? How do you advance a mission? In the Roman case, that usually comes down to just a few people, or even one person. Then you have to think about how to reconcile that with consensus, the collective good, and a much more holistic vision of how to move forward.”

When it comes to making big decisions, Dench always returns to one simple question: “Why not?” In taking on the interim dean position last year, she said she knew “it would be interesting” and that she would “learn a lot about Harvard, and a lot about myself.” After nearly a year in the job, she has also learned how much she loves teamwork and helping students succeed at every level.

“I am so invested in the academic and personal welfare of graduate students,” she said.

Yet Dench’s life could have taken quite a different turn had she chosen the family profession. Her father was the well-known Shakespearean actor Jeffery Dench. Her aunt is Dame Judi Dench, who won the Academy Award for best supporting actress for her turn as Queen Elizabeth I in the 1998 film “Shakespeare in Love” and is perhaps best known for her no-nonsense take as “M,” the head of the intelligence service in James Bond films.

The familial experience “was an intense sibling rivalry, like many others, except it played itself on a global stage,” the dean said, laughing.

Her own early acting forays included the role of the little girl in “Toad of Toad Hall,” a stage adaption of the children’s novel “The Wind in the Willows,” with her co-star, the mole, played by the young David Suchet (who later found fame playing the Belgian detective in the British mystery series “Agatha Christie’s Poirot”). The young Dench also starred opposite her famous aunt in an avant-garde 1968 movie version of “A Midsummer Night’s Dream,” with Judi cast as the fairy queen Titania, and Emma as Peaseblossom, one of Titania’s fairy attendants. She doesn’t remember much about the shoot, except that it was filmed in a muddy wood during a chill British November, and that she was “painted green from head to toe.”

But Dench’s love for languages soon turned her focus from the stage to the past. Learning French at age 8 was “unbelievably amazing,” she recalled. Studying Latin a few years later, she said, was “even better.” As a teenager, reading “Antigone” in its original Greek proved more challenging. “It almost killed me,” said Dench during an interview in her University Hall office. “I despaired.” But her stubborn side refused to yield. “I had to crack Greek.”

Intending to be an Egyptologist and study hieroglyphics, Dench’s interests shifted at Oxford. While completing the first part of her classics degree, she wrote a paper about Tacitus, a senator and historian of the Roman Empire, and began to see history as more than just political narratives and significant dates.

“I realized history might be about working out where people are coming from, what are they thinking — what they think about this, that, and the other. I got a really high grade on that exam paper, and I thought that might be the direction that I might go.”

Go she did. Her Oxford dissertation became her 1995 book “From Barbarians to New Men: Greek, Roman, and Modern Perceptions of Peoples from the Central Apennines.” In 2005 she published “Romulus’ Asylum,” which examines the multicultural nature and origins of the ancient empire. Her forthcoming book is titled “Empire and Political Cultures in the Roman World.”

Having served as interim dean at GSAS, Dench knows that challenges are part of the job. In the wake of a recent story in the Chronicle of Higher Education, in which a number of women accused Faculty of Arts and Sciences Professor Jorge Dominguez of sexual harassment, Smith announced the University’s decision to place Dominguez on administrative leave. He subsequently announced that he will retire at the end of the semester and immediately resign from his administrative duties. In response to the Chronicle coverage, Dench sent a message to students, affirming GSAS’s commitment to creating an inclusive community free from harassment and discrimination, and outlining the resources available to students.

Ensuring people’s voices are heard “is essential,” as is a visible institutional reaction, said Dench of the University’s efforts to encourage people to come forward and share their experiences with discrimination, and to support a zero-tolerance policy on sexual harassment and discrimination at Harvard. Those two things, said Dench, “have to go hand in hand.”

One path toward equality is through a more diverse faculty, said Dench, who supports the appointments of more women and underrepresented minorities to tenured and tenure-track professorships. She envisions “disciplines slowly reinventing themselves when faculty are diversified. It’s an intellectual need as well as a social and behavioral one.”

She also will be monitoring the unionization effort initiated by some GSAS students that could affect student from all the Schools. The National Labor Relations Board will hold a second election next month after setting aside the outcome of a 2016 vote. That decision followed an appeal that argued the voter lists were inadequate. (In the first election, the tally was 1,526 against unionization and 1,396 in favor.)

“As was the case in 2016, Harvard is 100 percent committed to ensuring a fair election,” said Dench of the vote scheduled for April 18 and 19. Dench hopes voters will examine all sides of the argument and explore in detail “what operating as a bargaining unit would mean and what possible alternatives would mean, and weigh them both before casting a vote. I also want to see as close to 100 percent of the eligible students voting this time.”

As permanent dean, Dench said she will continue to play a key role in the “culture shift that we are seeing” at Harvard and beyond involving discrimination and harassment, and will support the needs of graduate students in a changing world.

“I want to take a holistic approach to graduate education, reaching out across disciplines, helping students develop secondary fields, and sometimes helping them make the transition to non-academic careers, which I think is going to be crucial in the near to medium future.”