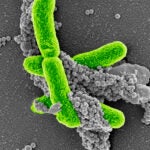 A new model for an old killer

Speaking at the John F. Kennedy Jr. Forum at the Harvard Institute of Politics, the surgeon, writer, and public health researcher cited the recent dramatic reductions in tobacco use and the overall increase in life expectancy over the past century as examples of how effective policies can aid solutions to vexing problems. 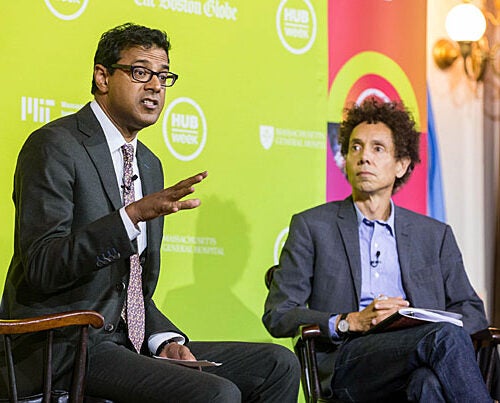 “But the story is, every time it takes longer than people think,” Gawande said, noting that the various campaigns against smoking took decades. “You’re working and chipping away and learning how to define the problem accurately, how to mobilize people to pull in the same direction.”

Citing the near doubling of the human life span since 1900, he said, “We’ve lifted the world, and that to me is evidence that it’s possible. It’s just there is not the simple quick fix.”

A professor at the Harvard T.H. Chan School of Public Health and the Samuel O. Thier Professor of Surgery at Harvard Medical School, Gawande is a practicing surgeon and executive director of Ariadne Labs, a joint center for health systems innovation. He is also a New Yorker staff writer and an author.

Joined by freelance journalist Cristine Russell, Gawande covered a range of public health topics at the forum, where he was introduced by David T. Ellwood, the Isabelle and Scott Black Professor of Political Economy and director of the Malcolm Wiener Center.

Gawande said many public health issues could be solved with strategies that have long been known but not fully implemented. He said, for example, that three things — licensing, an assault weapons ban, and gun buy-backs — could together put a dent in gun violence.

Evidence-based solutions also exist to stem the opioid crisis, he said, including expanding the use of electronic prescriptions to ensure patients receive only the amount of drug that they need, and using medicine-assisted therapy. Replacing short-lasting opioids with long-lasting ones such as methadone “cuts the opioid death rate by 90 percent,” he said. “It works, and we have been reluctant and unwilling to make that a standard part of what we do.”

The opioid epidemic and rising rates of heart disease are among the culprits in the recent decline in life expectancy, particularly among men with only a high school education, Gawande said. But he also cited broader societal issues, citing, for example, the fact that 70 percent of people do not have a four-year college degree and 60 percent never went beyond high school.

“We don’t have a plan that says what is your future in a knowledge economy when you have only a high school education?” he said. “And you cannot say to 60 percent of the country: Well, the future is not you … there’s no place for you in that future.”

Gawande said that unnecessary care, particularly for end-of-life patients, is a major cause of the nation’s high health care costs. As a solution, he said doctors need to talk to their patients early about their treatment goals, citing a study that found that cancer patients who had those conversations were less likely to die in a hospital, received less chemotherapy, and even lived longer.

“[W]hat is your future in a knowledge economy when you have only a high school education? … [Y]ou cannot say to 60 percent of the country: ‘Well, the future is not you … there’s no place for you in that future.’”
—Atul Gawande

Asked how the nation might expand affordable health care coverage, Gawande said universal care was a key strategy. He said a recent study showed that health care expansion carried out at the state level in the past decade led to reductions in medical debt, improvements in health, and a drop in mortality.

“There are a million ways to do universal health coverage — just do it. I’m actually pretty ecumenical about whatever version we go for. We just need to be committed to implementing,” he said.

“It is fundamentally about values, and we’re still having a serious, many-decades-long debate about whether people deserve a right to health care.”

Gawande said that on a visit to his native Ohio for a New Yorker story last fall, nearly all of the people he spoke with rejected the idea that people have a right to health care. Many are struggling with their own medical bills and resent having to support neighbors on Medicaid. But he said they do support Medicare, which points to a possible route to universal health care.

“They said we know the government is running Medicare, but everybody pays in, it’s the same tax on everybody, and everybody benefits equally. And that, I think, is the bridge that has to be crossed,” he said.