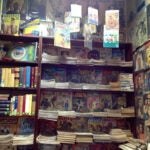 Davóne Tines ’09, a bass-baritone with American Modern Opera Company (AMOC), stepped to the microphone in the Horner Room, a rehearsal space at Radcliffe Institute, and began to sing:

Listen to the distant tom-tom
And answer quickly when they call you
Beat more loudly on your tom-tom|
And tell us if there’s danger near.

These are the opening lines of “Tom-Tom,” a three-act opera that hasn’t been performed since 1932, when the Cleveland Stadium Opera Company premiered the work by African-American composer Shirley Graham before a weekend crowd of more than 25,000.

“This is a dream come true to see this come to fruition,” said James T. Kloppenberg, Charles Warren Professor of American History, who came to hear the workshopping of “Tom-Tom” and to celebrate the research of his former student Lucy Caplan ’12.

Caplan, who is working on her Ph.D. at Yale, found “Tom-Tom” while poking around the Schlesinger archives as a junior in search of a topic for her College essay. Composed by Graham, who had studied at Oberlin College and Conservatory and would later marry W.E.B. Du Bois, the opera tells the diaspora story of African-Americans, beginning in an unnamed West African village, traveling to a Southern plantation, and ending amid the Harlem Renaissance.

“The most exciting aspect for me is the ambition and scope of ‘Tom-Tom’; it’s an epic piece,” said Caplan. “It covers amazing historical terrain, and the music reflects all of those locations. Graham’s dad and brother worked in Liberia, and you can hear that influence. The second act has spirituals, and the third, where one of the characters is a cabaret singer, features early jazz sounds.

“But Graham also had studied at a conservatory so she brings in the Western classical tradition, too. You can hear her playing with all these historical and musical elements and turning them into a giant work. She didn’t go for some narrow or miniature story. She went for all of it at once.”

Also extraordinary about “Tom-Tom” were Graham’s progressive ideas about community engagement. The opera featured local church choirs and a nearby museum held a related exhibition. The set design came by way of a contest for Cleveland students with a $50 prize.

“We think of community engagement as new for musical institutions, but Graham was thinking in those terms a long time ago and building them into the structure of the piece,” said Caplan. “It’s a really different way to think about what it means to be a composer on the most fundamental level.”

Graham, the daughter of an African Methodist Episcopal minister, married Du Bois in 1951, and moved to Ghana with him in 1960, never to return permanently to the U.S. She died in 1977, 14 years after her husband.

“Tom-Tom” arrived at the Schlesinger in 2001 when Radcliffe and the W.E.B. Du Bois Institute for Afro-American Research (now the Hutchins Center) jointly acquired Graham Du Bois’ papers from her son, David.

“Her husband was such a towering figure and she supported his work, but she had this whole career before, during, and after her life with him,” said Ellen M. Shea, head of research services at the Schlesinger. “She was an extraordinary combination of artist and activist, and her collection documents a rich and multifaceted life.”

Scholars aren’t sure why “Tom-Tom” vanished from the stage after its successful Cleveland debut. Caplan, who is writing her dissertation on 20th-century African-American opera, cited many factors, including the Depression. But she believes the opera’s permanent sidelining was more a result of race, gender, and politics.

“Opera companies also would have been hesitant to put on a work by a black female composer affiliated with the communist party,” she said. “For what a remarkable work it was as the first opera by an African-American woman, and performed in such an incredible way, there’s a limited amount of scholarly work and clearly more needs to be done. ‘Porgy and Bess’ gets performed again and again and again, and it’s a white man’s version of black life. That a black woman’s vision of black life has not been performed says a lot about the state of opera.”

A revival of the opera could happen with a small-scale company open to adventure, said Caplan. AMOC’s Tines hoped performing the excerpts at Radcliffe last month might inspire further interest in the work.

“Being an African-American vocalist, it’s unique and exciting to present it to an audience for the notion of exposure and to ask: What does it mean to look at possible parts of the canon that aren’t part of the canon?”