FAS Dean Smith to step down 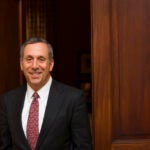 Over 11 years, he worked to improve teaching excellence, student life

Michael D. Smith, Edgerley Family Dean of Harvard’s Faculty of Arts and Sciences (FAS), has announced he will step down as leader of Harvard’s largest School to return full-time to teaching.

“I am extremely proud to be part of this community, which has constantly strived to ask the ever-bigger, ever-more-important questions, from climate change to inequality,” he said in a letter to the community. “Especially in our learning mission, through an embrace of making, doing, and performing, Harvard has remained anything but passive. It has been an undeniable privilege for this simple engineer to have had a front-row seat as our community built a foundation within the FAS that will continue Harvard’s commitment to excellence and truth now and into the future.”

In a message to the FAS community today, President Drew Faust conveyed her gratitude to Smith for his “extraordinary leadership and service as dean of the Faculty of Arts and Sciences.”

“For nearly 11 years now, Mike has been a steadfast partner, an enthusiastic collaborator, and an institutional citizen always focused on the progress of FAS and the University,” said Faust. “He has approached all he does with a keen intelligence, a humane concern for others, a bedrock sense of integrity and fairness, a deep appreciation for the growing diversity of our community, and a paramount devotion to educational and scholarly excellence.”

Harvard President-elect Lawrence S. Bacow will lead the search for the next dean of the Faculty of Arts and Sciences, with Smith continuing in the interim. Bacow praised Smith’s leadership and said he looked forward to engaging with FAS faculty, students, staff, and alumni to hear their hopes and ideas for the future as the search gets underway.

“During my time on the Harvard Corporation, I have seen firsthand Mike Smith’s commitment to attracting the most-talented students, strengthening the faculty, and advancing teaching and learning. His unwavering dedication to the ideals of liberal arts education is inspiring, and the FAS is better for his many years of steady and thoughtful leadership,” said Bacow.

“[Michael Smith] has approached all he does with … a bedrock sense of integrity and fairness, a deep appreciation for the growing diversity of our community, and a paramount devotion to educational and scholarly excellence.”
— President Drew Faust

Smith, who joined Harvard’s Computer Science Department in 1992, also will leave a legacy of having recruited the most diverse group of world-class faculty at the top of their fields in FAS history.

Claudine Gay, dean of social science and Wilbur A. Cowett Professor of Government and of African and African-American Studies, said, “His commitment to faculty diversity is deep and genuine, and his transformation of the face of FAS to reflect the breadth of excellence out there has been inspirational. He has put real resources behind these efforts to recognize how diversity and excellence go together, and I have appreciated his integrity and clarity on this important issue.”

Smith’s collaborative spirit and reputation as someone who likes to solve complicated problems have led to new programs and initiatives, particularly focused on fostering teaching excellence and nurturing a vibrant research environment. In 2016, he created the Dean’s Faculty Resources Committee to generate more strategic opportunities to support such efforts. He implemented the tenure-track process and the Dean’s Competitive Fund for Promising Scholarship, which assists professors doing experimental and forward-leaning work.

In his earliest days as dean, Smith instituted procedural changes and installed a data-driven culture built on principles of transparency. That leadership and astute strategy helped FAS navigate the trials of the 2008 financial crisis.

“Mike has consistently been a terrific partner through the growth phases of SEAS, but his legacy of leadership during that challenging financial period is particularly noteworthy,” said Francis J. Doyle III, dean of the Harvard John A. Paulson School of Engineering and Applied Sciences (SEAS), and John A. and Elizabeth S. Armstrong Professor of Engineering and Applied Sciences. “His accomplishments were vast, and his calm, level-headed approach in many challenging situations has been a great source of inspiration for me.”

“The FAS administrative and finance team could not have imagined a better leader and partner than Mike Smith,” said Leslie Kirwan, dean of administration and finance, whom Smith hired in 2009. “At the operational level, he has been able to navigate seamlessly between the big picture and pragmatic detail. His hands-on, engaged approach was evident in the financial recovery, and even more so in the success of House renewal, a massive investment which he has led in every aspect.”

Smith also spearheaded Harvard’s successful Campaign for Arts and Sciences, exceeding expectations with record-breaking donations in financial aid and for SEAS. He increased unrestricted giving through the campaign to create a more nimble FAS that can respond to both opportunities and challenges, and can support a range of academic initiatives.

Alumnus Kenneth Griffin ’89, who gave $150 million to the campaign to support the financial aid program, praised Smith’s “principles and relentless pursuit of excellence.”

“Dean Smith has always been passionately committed to Harvard’s gates being open to the brightest and most engaged students from around the world, irrespective of financial means,” Griffin said. “He has also been incredibly focused on Harvard maintaining its stature as the world’s greatest teaching and research institution.”

In stepping back from administrative duties, Smith, the John H. Finley, Jr. Professor of Engineering and Applied Sciences, will transfer more of his day-to-day influence to the classroom. During the past two years, Jim Waldo, Gordon McKay Professor of the Practice of Computer Science and chief technology officer at SEAS, has taught a freshman seminar on the internet with Smith.

“His style is low-key, engaging, and immensely approachable,” said Waldo. “I can only imagine how our freshmen have felt coming into a seminar with a dean, and, by the second week, they all know Mike as a friend. He asks just the right questions and makes just the right comments to help them express what they are thinking and to guide them to new levels of clarity and insight. While this is a huge loss for FAS, his future students are in for a real treat. And the students are, after all, what Harvard is all about.”