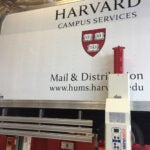 Harvard rolls out program to protect pedestrians and cyclists

The reasons to homeschool are as varied as the students who do it. Some want a more experiential learning environment; others wish to customize their subjects. Still others choose to homeschool based on family dynamics. Sometimes it’s a matter of convenience.

The students who come to Harvard by way of homeschooling exemplify all these reasons and more. The three profiled here share a spirit of curiosity and independence that continues to shape their education.

Claire Dickson’s path to Harvard Yard began on Harvard Avenue. That’s the street she lives on in Medford, and where she studied math, read Melville, and played piano as a homeschooler.

“My family’s motivation was mostly from wanting to have a lot of experiential learning and my mom’s general dissatisfaction with the public school system,” Dickson said. “Why would you go to the same building every day and do the same thing every day? Whatever I was interested in, I just went for.”

Dickson, a psychology concentrator who lives at Lowell House, said every “school” day was different. Some were filled with classical and jazz lessons. There was endless reading. And she saw “Hamlet” for the first time when she was 9.

“There were so many cool things going on around Boston, and my parents supported whatever I wanted to do,” she said. “You have to be intrinsically motivated to do the things you want to do. Homeschooling really pushed me to do that. We saw a lot of live theater and music, tagging along with my parents to whatever they were doing.”

Her education became slightly more structured in middle school, when she would meet with a small group of homeschooled students for sessions in math, biology, and history. In eighth grade, she began to take classes at Harvard Extension School and Bunker Hill Community College.

“If I was interested in something, there was nothing stopping me from making it happen for myself,” Dickson said. “I became interested in psychology so I started going to free lectures at Mass. General Hospital. I ended up doing research for a doctor there.”

Dickson said parallels between homeschooling and college — a given class a couple of times a week, combined with lots of independent study — made the academic transition easy. The social scene was a new experience, but she made connections volunteering through the Phillips Brooks House and singing in band.

“I’ve picked an alternative way of being at the School,” she said. “Lots of students are in suits, interviewing for jobs. I’m not doing any of that recruiting. Reflecting on that, it might be a result of being homeschooled. I kind of want to make my own way.”

Growing up in Takoma Park, Md., Abraham Joyner-Meyers lived only a few blocks from the local elementary school. But the district stopped offering kindergarten just as Joyner-Meyers was about to enroll. So his mom, at work on a book in a home office, set up a desk for him next to hers.

“It went really well,” said Joyner-Meyers, a student in the five-year dual degree program with Berklee College of Music. “After a year of homeschooling, not only was it good with my relationship with her, but it also gave me enormous freedom to study what I wanted.”

A self-described book nerd, Joyner-Meyers read voraciously, learned math with help from his dad, and for a time studied acting.

“I loved the freedom to be at home and to go out in the community,” he said. “I went to book groups at my local library, which was the first place I walked to myself, and later into D.C. to art museums.”

Joyner-Meyers doesn’t think music would have the same prominence in his life had he not been homeschooled. His work with the acting group introduced him to older students who were thriving outside institutional high schools. Their enthusiasm gave Joyner-Meyers, a violinist, a model for interacting with local artists. He eventually expanded to Irish folk music and started playing at festivals, then in a band, then in his own group.

“In D.C., the Irish music scene is surprisingly alive,” he said.

Part of the first cohort of Harvard-Berklee students, Joyner-Meyers said he feels more empowered to shape his academic and musical education in dual studies than he would if he had enrolled in a conservatory-only program.

“The education is more diverse having the resources of two schools,” he said, adding that he has already performed with the Hyperion Shakespeare Company and been invited to play mandolin in a quartet. “My dream is to unite Shakespeare and music into some interest as an actor-scholar. It’s exciting to be one of the first students, and to think about how it’s going to work in the future. We’re lab rats just a little bit, and it’s worth it.”

From his earliest years as a student, Kemen Linsuain’s interest in math and physics outstripped opportunity in his Pittsburgh school district.

Though his parents made the call on homeschooling, it was Linsuain who guided his own education.

“There wasn’t much of a plan or a long-term plan going in; I just took classes I was interested in,” said Linsuain, who was attending college math and physics courses by age 12 at Carnegie Mellon and Penn. State (where his dad taught at the time). “Next to CMU is the public library and science museum [Carnegie Museum of Natural History], so between classes I would just hang out there.”

The Kirkland House resident, who works in the lab of physicist Philip Kim researching low-dimensional materials, plans to move to Washington, D.C., after graduation for a position as an analyst with the consulting firm Dean and Company.

“I have always had a bit more of an outsider’s perspective on things,” he said. “During the job recruiting, I found that view pretty useful. I really had no preconceptions or stereotypes about things in the process. It was kind of nice. I was a little more free to be myself.”