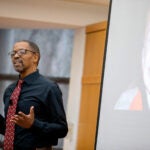 The Harvard Foundation has named Grammy Award-winning recording artist, songwriter, and visual artist Solange Knowles as its Artist of the Year. She will be recognized at the annual award ceremony on March 3 at Sanders Theatre.

Knowles, who recently was named one of Glamour magazine’s women of 2017 and received the Billboard Impact Award, has used her public platform to advocate for justice and fair representation, promoting constructive and empowering political messages. From her acclaimed album “A Seat at the Table” to performing for then-President Barack Obama at the White House, Knowles has invoked themes dealing with empowerment, identity, grief, and healing that have resonated with millions of people. Her performance-art shows at the Guggenheim Museum and the Chinati Foundation, along with her installation at London’s Tate Modern museum, have amplified a defining career of visual art and activism.

“A Seat at The Table” debuted at No. 1 on the Billboard Top 200 Chart, Apple Music, and iTunes Overall Top Albums Charts. Its success led to her 2017 “Orion’s Rise” performance series that included shows at Radio City Music Hall in New York City, the Hollywood Bowl and the Greek Theatre in Los Angeles, the Kennedy Center in Washington, D.C., and the Orpheum Theater in Boston. A portion of the proceeds from one of her Radio City performances and all of the proceeds from her Orpheum performance were donated to hurricane relief efforts.

In accepting the Glamour award, Knowles said, “When I was about 11 years old, someone told me, ‘You’ve got to shoot for the moon and, even if you miss, you’ll land among the stars.’ Well, I wasn’t interested in either one. I was interested in the journey there.” She added, “We as women are told from the second that we come into our own that we must not only shoot for the moon but hold it in our hands, turn it until the morning, nurture all of its rings … and feel and look like a goddess. That is not my journey.”

The Harvard Foundation for Intercultural and Race Relations, the University’s office for interracial, interethnic, and interreligious relations, honors the nation’s most acclaimed artists and scientists each year.

The award will be presented to Knowles at the Cultural Rhythms Festival during a program on March 3 that begins at 4:30 in Sanders Theatre. Tickets will be available to Harvard ID holders at the Sanders box office, 45 Quincy St., at noon on Thursday. (Two-ticket limit per ID. Price $10.) Tickets will go on sale, as available, to the public at noon on Feb. 23 at the Harvard Box Office, 10 Holyoke St., by phone at 617-496-2222, or online at www.boxoffice.harvard.edu. (Handling fees may apply. Two-ticket limit. Price $20.)