A business success based on openness 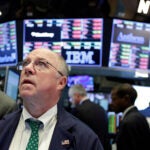 Few people are more qualified to dispense business philosophy in Cambridge than investor and hedge-fund manager Ray Dalio, a Harvard Business School (HBS) graduate and one of the 100 richest people in the world.

Last fall he published “Principles,” a book that outlines the philosophies behind his work at Bridgewater Associates, the investment management firm he started in 1975 after earning his M.B.A. Addressing a standing-room-only audience at Harvard Kennedy School Wednesday evening, he discussed “Pursuing Truth in the Global Economy” with a longtime friend and intellectual sparring partner, Lawrence H. Summers, the Charles W. Eliot University Professor, Frank and Denie Weil Director of the Mossavar-Rahmani Center for Business and Government, and Harvard president emeritus.

Summers introduced Dalio as “an American success story,” one of whose first paying jobs was a golf caddy. (He once carried clubs for Richard Nixon, who didn’t impress him on the links.) Summers said that Dalio had already become a successful trader before coming to Harvard — making his first purchase of Northeast Airlines stock at age 12. “I only bought that stock because it was the only company I could find that was selling for less than $5 a share, so I thought I’d get more money if it went up. Dumb, isn’t it?” Dalio said. Still, Northeast’s value tripled, and that gave Dalio his first modest success. “From then on, Ray was hooked,” Summers said.

But much of the discussion was less about economics and more about the principles guiding Dalio’s practices. Bridgewater, he said, runs as an “idea meritocracy” where opinions are carefully vetted so that the best ones rise to the top.

“What I mean by that is three things,” Dalio said. “First, you have to put your honest thoughts on the table for everyone to see — if you’re really feeling that an idea isn’t the smartest, are you really able to say it that way? Second, any disagreement needs to be thoughtful: Can you understand that what’s in your head is only a small portion of what you need to know? And third, you need to have protocols for getting past your disagreements. That’s what I’ve built the culture on, knowing peoples’ weaknesses as well as their strengths.”

Bridgewater’s employees are ranked on their believability, a system, he said, that quantifies the kinds of value judgments people tend to make. “There are two yous in everybody: the intelligent, thoughtful you, and the emotional you. Intellectually, you would always want to know what your weaknesses are, but emotionally it could be a challenge. What made Bridgewater successful was our ability to have that kind of thoughtful disagreement. That’s the culture in a nutshell.”

In one of the hour’s livelier exchanges, Summers tried to prod Dalio, one of Time magazine’s 100 most influential people in the world and one Bloomberg’s 100 wealthiest, to get emotional on the topic of President Trump.

“No president seems less committed to the rationality of debate than the current one,” Summers said. “Nobody seems further away from what you passionately stand for. But it is hard to get you to say anything critical about him.”

Dalio maintained his analytical stance, saying that anyone in a position of power — whether it’s Summers at Harvard or Trump in the White House — needs to take his or her own responsibility to be judged and criticized.

“The basic problem is that we don’t go above ourselves to say what is good behavior and what is bad behavior,” he said. “That’s what President Trump should do.”

Can a little ambiguity be more useful? Summers asked. He referenced President Richard Nixon’s opening visit to China, when the two countries agreed on a diplomatic document over the disputed issue of Taiwan. “The essence of that agreement was that the words were interpreted differently in English and Chinese. We believed we’d made our deal, they believed they’d made their deal, and both sides shook hands.”

Does that mean there are times when it’s advantageous to keep things a little blurry?

“Nothing is 100 percent,” Dalio replied. “Clarity is the desirable thing. But sometimes a little ambiguity might facilitate a discussion that allows us to move forward.”

And with that he turned to his interviewer, saying, “That’s the Larry Summers principle, and it’s one that I would buy into.”