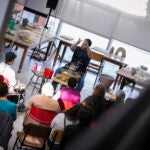 Following his father’s example, Donato plans to make most of Olympic experience

Every player on Harvard’s men’s hockey team knows the plot; many can recite the lines by heart.

The 2004 film “Miracle” tells the underdog story of the U.S. team that defeated the Soviet Union — the defending gold medal champion and overwhelming favorite — in the semifinals of the men’s hockey tournament in the 1980 Olympics in Lake Placid, N.Y.

“Do you believe in miracles? Yes!” shouts Al Michaels, famously losing his TV commentator’s cool in a surge of national pride as the buzzer sounds and U.S. players swarm the ice to celebrate their 4‒3 win over the Soviets, many of whom were on break from the National Hockey League. The U.S. team, the youngest in the competition and made up entirely of amateurs, would go on to win the gold.

“It’s one of my favorite movies,” said Ryan Donato ’19 on a recent morning at Harvard’s Bright-Landry Hockey Center before suiting up for practice. “Every bus trip we have ‘Miracle’ with us.”

Donato will bring his dream of real-life glory onto the ice on Feb. 14, when he and his teammates face Slovenia in the group stage of the men’s ice hockey tournament in the 2018 Winter Olympics in South Korea. While the center’s talent earned him a spot on the U.S. team, he knows one other factor was in play: The decision by the N.H.L. not to send any of its players to the games, which cleared the way for college athletes and players from other pro leagues.

“Obviously it’s something I might not have had the opportunity to do,” said Donato. “I think our team is going turn a lot of heads.”

For Donato, who got the confirmation phone call about a week before the team was officially announced on New Year’s Day, the news was a welcome Christmas present. But it wasn’t entirely unexpected.

The 21-year-old Scituate native had already hit some major milestones. He was a standout at Dexter School, and took part in USA Hockey’s National Team Development Program. When he was 18 the Boston Bruins selected him in the second round of the N.H.L. draft. As a freshman at Harvard he received the George Percy Award for enthusiasm, sportsmanship, team spirit, and loyalty. Last year he helped the Crimson win the Beanpot for the first time in 24 years.

USA Hockey officials told Donato that his Olympic tryout would be his performance during the College season. If he has been feeling the pressure, it hasn’t shown. Donato is one of the top offensive players in the country — a leader in goals and assists — and a contender for the Hobey Baker Award, hockey’s equivalent of the Heisman Trophy.

Donato counts his “hockey sense” as one of his biggest strengths: “Just my head for the game, knowing where the puck will be and being in the right position to score.” And it’s safe to say he’s honed that sense with a little help from someone close to him, and to Harvard — Ted Donato ’91, his father and the men’s hockey coach since 2004.

“Sometimes I have to take my coaching hat off and put my dad hat on,” said the elder Donato, who competed in the Olympics in 1992 and played 10-plus seasons in the NHL. “Certainly when Ryan told me [he made the team], as a parent I was just over the moon.”

The coach planned to keep it simple when offering Olympics advice to his son. “I would just say understand the incredible opportunity you have, play the best you can … and enjoy it.”

Ted Donato said that his own experience was about much more than going for gold. He recalled high-fiving American figure skaters who attended hockey games, watching Eddie “The Eagle” Edwards in the ski jump, and connecting with a range of athletes from all over the world. Those encounters turned out to be the most memorable part of the competition.

Donato also remembers how his respect for the Olympics was inspired in part by Harvard coaching legend Bill Cleary ’56, a two-time Olympian who won gold as part of the 1956 U.S. team.

“To him, the Olympics was the highest honor anybody could ever achieve playing hockey, or any sport,” Donato said.

Cleary, who remains adamant that Olympic competition should be reserved for amateurs, turned down the opportunity to play professionally so he could represent the U.S. He’s never regretted it.

“I could have won 10 Stanley Cups and it would not have equaled marching in the Olympic parade,” said Cleary, who spent 19 years as coach of the Harvard men.

“You want others to have that kind of experience … I am delighted for Ryan and for the whole Donato family.”

Following the example of his father, Ryan Donato knows that whether or not he wins a medal, he’ll return to the U.S. changed by the experience.

When recalling his hockey career, Donato said his dad “doesn’t really talk about the games and the highlight reel goals that he had. The main thing he talks about are the friendships and the stories he has with those friendships, and the connections that he has built along the way … that’s something I want to emulate.”