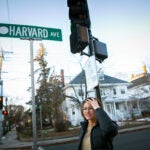 A course that debuted last semester took students out of the classroom and into the community, where they got the chance to roll up their sleeves and take some practical action to help the less advantaged.

“I wanted to do a project-based class,” said Flavia Peréa, the founding director of the Mindich Program in Engaged Scholarship and a lecturer on social studies who led the course “Urban Health and Community Change: Planning Action with Local Stakeholders.”

“There are tremendous academic resources in Cambridge and Boston, but Somerville doesn’t benefit as much from those resources. I wanted to leverage Harvard’s resources to help address some of the needs in the Somerville community, and I think of our students as part of those resources.”

Peréa said she wanted to give the students “the chance to explore and propose solutions to complex, real-world public health issues in collaboration with community stakeholders,” and for Savannah Miles ’18, the experience stood out.

“It was a really uniquely designed class, and unlike any other class I’ve ever been in” she said. “This is the first class I’ve taken at Harvard that focuses on tangible skills for community improvement. We were entirely focused on making a change: looking at a problem, and figuring out how to solve it.”

Miles, a Dunster House resident with a concentration in social studies, was part of a group tasked with finding solutions to housing insecurity and homelessness. Part of their work was to look for ways to destigmatize the use of Section 8 vouchers.

“We developed an educational program to help encourage landlords to accept the vouchers, as well as a proposal for a property tax incentive to encourage residents to create affordable living spaces in their existing homes,” Miles said. “We tried to create options that would appeal not only to citizens but to developers and landlords as well.”

“We were entirely focused on making a change: looking at a problem, and figuring out how to solve it.”
— Emelia Vigil ’18

For Emelia Vigil ’18, a psychology concentrator who also lives at Dunster House, the most rewarding part of the class was spending time getting to know Somerville’s residents.

“We were really able to put a face to the Somerville community and see the diversity of age groups, ethnicities, and perspectives,” she said. “I’ve had the opportunity to take lots of great classes here at Harvard, but very few give you the chance to be out in the community like this.”

Chris Higginson ’18, a Winthrop House resident with a concentration in molecular cellular biology, was part of a team that focused the “SNAP Gap” — the 61 percent of Somerville residents who are eligible to receive Supplemental Nutrition Assistance Program benefits, but do not apply for them.

“We wanted to address why people were not enrolling, and try to ameliorate that,” he said. To that end, Higginson and his team developed a plan to have residents already enrolled in SNAP meet with prospective enrollees, and created monthly sign-up days with administrative staff in select locations in Somerville, rather than their usual office in Chelsea.

“A lot of students feel like they’re in a Harvard bubble, and it was really great to get out into the community and get to know Somerville,” Higginson said.

The students partnered with the Somerville Community Health Agenda, under the leadership of its director, Lisa Brukilacchio. Brukilacchio said that in addition to benefitting the students, the class gave community stakeholders a chance to share their real-world insights, both to help inform a future generation on community-based issues and initiatives and to help stimulate movement on issues such as housing, food access and social connections, which were identified in the 2017 Wellbeing of Somerville Report.

“The students were able to serve as additional researchers joining the Somerville culture of seeking innovative approaches, supported by models for addressing these issues in other communities,” she said.

“Urban Health and Community Change: Planning Action with Local Stakeholders” is expected to become an annual offering, and will run for the second time in the fall. It was developed in partnership with the City of Somerville Health and Human Services Department, Cambridge Health Alliance, and Somerville Community Health Agenda and is offered through the Mindich Program in Engaged Scholarship.