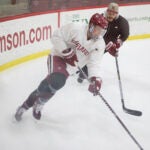 Recognizes alumnus’ 40 years of support and service to the Crimson

Harvard Athletics and the men’s and women’s basketball programs have announced the dedication of the court in the newly renovated Lavietes Pavilion as the Thomas G. Stemberg ’71 Court.

The dedication was officially announced tonight during the men’s home game against Princeton, and comes on the heels of Stemberg’s selection as an Ivy League Legend of Basketball.

According to his family, “Tom was always Harvard basketball’s No. 1 fan. Aside from raising a family of six sons and three stepdaughters, his proudest achievement came in serving as the ‘Godfather’ of the Friends of Harvard Basketball.”

Stemberg’s association with Harvard dates back to 1967. He earned his undergraduate degree from the College in 1971 and business degree from Harvard Business School in 1973 as a George F. Baker Scholar. During his time in Cambridge, Stemberg co-founded The Harvard Independent, a student-run newspaper, took on business management roles with Harvard Student Agencies, and supported the basketball team as a member of the Harvard band.

Stemberg helped establish the Friends of Harvard Basketball in 1974 and served as its longtime chairman. His unwavering support of the Crimson basketball program led to his family endowing the men’s head coaching position in 2015.

“Tom supported the program for more than 40 years, mentoring student-athletes and helping them pursue their passions beyond the court,” continued the Stemberg family. “He was instrumental in the turnaround of the men’s basketball program and encouraged the University’s athletic department to hire head coach Tommy Amaker. He looked on proudly as the team then went on to win five consecutive Ivy League titles. We know he would be floored by the generosity of those who have contributed to the game-changing renovations to Lavietes Pavilion. It was an amazing tribute to Tom and to Ray and Estelle Lavietes.”

As part of the larger pavilion renewal project, 34 of Stemberg’s closest friends, Harvard classmates, and business partners came together to raise $10.6 million in his honor. Earlier this evening, this same group of donors gathered with members of the extended Stemberg family — as well as Estelle Lavietes (widow of Ray Lavietes ’36) and her two sons — to celebrate Harvard basketball and hear from Harvard President Drew Faust.

“Tom Stemberg was an exceptional person. His truly passionate commitment to Harvard basketball and our students was unique and longstanding,” said John K.F. Irving ’83, M.B.A. ’89, a longtime friend of Stemberg. “It is only fitting that the Crimson will practice and play on the Thomas G. Stemberg ’71 Court.”

The Stemberg family remains incredibly active in and dedicated to supporting the Harvard basketball program today.

“We were blessed to know Tom as a wonderful friend and are pleased to see his memory live on in this most appropriate way,” continued Irving, “What a tremendous way to recognize his dedication and life!”