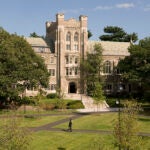 When Anthony Peterson’s grandson, Damon, was 5 years old, he asked: “Am I black or am I white?” Upon hearing that he was white, Damon decided, “When I grow up, I’m going to be black.”

While there was nothing wrong with Damon’s ability to distinguish colors, Peterson said his grandson was exhibiting an early understanding of how society imposes values on racial identity.

Peterson, an adjunct instructor at Trevecca Nazarene University, was joined by Callie Crossley, host of WGBH’s “Under the Radar” at a recent Faculty of Arts and Sciences Diversity Dialogue.

In his work, Peterson, who holds an Ed.D. and degrees in religion and psychology, strives to foster thought-provoking discussions on race — a potentially fraught topic for many.

“In our lives we follow a stubbornly ingrained false narrative,” Peterson said. “We tell children that race is real but that race doesn’t matter, when the opposite is actually true. We believe that any mention of race exaggerates our differences, minimizes our similarities, and exacerbates our problems.”

Peterson maintains that race is a necessary topic everywhere from the boardroom to the classroom. Studies have indicated that when adults avoid discussions about race, children receive messages about it that are inaccurate at best and damaging at worst. Children, he said, just want to know the truth.

“Children who are taught to be colorblind are blindsided,” Peterson said. “When we talk openly about race, we don’t burden children — we free them.”

Peterson shared examples from his own life, including a discussion with his granddaughter, Chelsea, who was horrified at a drawing of a black Elsa, a traditionally white character from Disney’s “Frozen.” Instead of “letting it go,” Peterson wanted to engage with his granddaughter about her reaction. “I had to venture into that discomfort,” Peterson said. “What followed was a loving and truthful conversation between three white children and their black grandfather.”

But for many, Peterson said, discussions about race only come up when something gains national notice, such as the 2017 white supremacist rally in Charlottesville, Va. The danger in this, Peterson said, is that it’s easy for white people to individually denounce blatant and aggressive acts of racism and assume the conversation ends there.

“The problem with this is that racism isn’t just overt and violent. Racism is not just individual,” he said. Instead, Peterson continued, we need to confront systemic racism, such as white privilege and normativity.

Crossley said that too often the burden of initiating or deepening everyday conversations about race is placed on people of color. She shared studies on biases and privileges, such as Project Implicit, which includes a test that addresses people’s unconscious attitudes toward race.

Even within less-overt racism, people will go out of their way to avoid being called racist, despite actions that are racist, she said.

Crossley pointed out that people of color often don’t want to identify acts as racist. “You don’t want it to be that, because it is out of your control. It’s embedded in the system.”

Peterson agreed that calling out racism is difficult and complex, but to say that it is not a factor in everyday interactions is disingenuous. “Race is a powerful factor, and a meaningful factor. To discount it is ignorant at best,” she said.

The next Diversity Dialogue — on the theme of storytelling to enhance inclusion — will be April 19. It will feature author and public speaker Mike Robbins, who will discuss “bringing our authentic selves to work.” The Diversity Dialogues are free and open to the public, and are offered through the FAS Dean’s Office, FAS Human Resources, and the FAS Office of Diversity Relations and Communications.