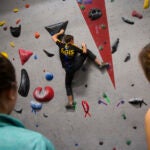 In the mid-1970s, Harvard was hemorrhaging support staffers. Their average employment spanned one to two years, costing the University greatly in recruitment, training, and retraining.

Something needed to change.

“My argument was: We’re the primary educational institution in the world. That’s our product,” said Shinagel in his Wadsworth office, where he has settled in semi-retirement after 38 years as dean of the Division of Continuing Education. “Why don’t we make our education accessible to our staff?”

A year later, the Tuition Assistance Program (TAP) was born, eventually expanding to offer reduced tuition rates at several other University Schools. Together with the Tuition Reimbursement Program (TRP), which helps employees to fund their education at other accredited institutions, the program remains a big draw for current and would-be employees. In the 2016-17 year alone, just over 2,000 Harvard employees have taken advantage of TAP through the Extension School, a large jump from the 350 or so who first matriculated in the ’70s.

“It’s been a big boon to Harvard and to all the staff,” said Shinagel. “It speaks to Harvard as a premiere educational institution that has also looked after its own, mentoring staff and enabling them to achieve whatever they wanted to achieve.”

When TAP employees are asked why they embrace the program, they commonly cite their innate curiosity about the world and their desire to improve their lives.

Kalan Chang, manager for overseas financial operations at the David Rockefeller Center for Latin American Studies, said he specifically applied for jobs at the University to take advantage of its education benefits. Arriving from Ecuador, Chang was encouraged to apply to TAP and to the Bridge Program after getting a job as a custodian at the John A. Paulson School of Engineering and Applied Sciences.

“My thought was, if you’re going to learn English, why not learn it at the best university in the world? I started from the lowest, but 7½ years later, I spoke English and had a bachelor’s degree in government with minors in Spanish and accounting.”

His coursework spanned politics, race relations, the Incan Empire, and environmental management. Eleven years after he was first hired by the University, Chang is using the TRP benefit to pursue an M.B.A. at Northeastern University, focusing on finance. For him, TAP was a key part of building a better life for himself and his family.

“Having a good job, being able to pay for school, kids, rent, or mortgage, to me that is the best. It’s what most people would like to have. It’s the American dream.”

“TAP has made access to education easier and more accessible to so many of our colleagues,” said Marilyn Hausammann, Harvard’s vice president for human resources. “It’s gratifying to think of the difference the program makes in the lives of so many of those with whom we work.”

For Laura Buso, community outreach specialist at the Harvard’s Employee Credit Union, the Extension School’s sustainability programs were particularly attractive, aligning with her background in corporate sustainability and the credit union’s not-for-profit mission. TAP made a master’s degree in sustainability management possible.

“I’m one of seven kids, and only the second of my siblings to go to a four-year college. All of us understood that we’d be taking on the debt of our college education ourselves,” she said.  “Without TAP, I absolutely wouldn’t have been able to get a master’s degree.”

A lifelong learner, she grew up in the Great North Woods region of New Hampshire, exploring its rich flora and fauna with her biologist father. Protecting and preserving the environment was part of her family culture from a young age. Concerned with the amount of litter they saw near their house, her family started an informal trash collection project that eventually expanded to include help from all of their neighbors.

“That had a big impact on me when I was little, and how I view the world. Sustainability starts with you and me as individuals, and our collective action can really influence other people.”

She follows a motto handed down by her grandmother: Stay curious.

“That’s been a theme for me the past few years,” said Buso. “I don’t think of myself as finished, even though I’ve graduated. When will I ever have another opportunity like this?”