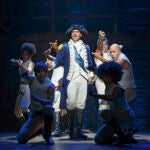 Ask Joanne K. Cheung why she studies the way people conceptualize climate change and she’ll tell you, “I’m a designer. It’s part of the job to think about the future.”

Cheung, a master’s of architecture student at Harvard’s Graduate School of Design and a fellow at the Berkman Klein Center for Internet & Society, makes a passionate case for integrating climate change into art and design. She believes they have a special capacity to shape how people see, which can in turn effect how they act on climate.

“This is a hard truth. Why aren’t we factoring climate change into every part of the design process?” she asked.

Cheung’s most recent work builds on a trip she took to Iceland last summer. There, she worked with researchers at the Iceland Glaciological Society and Icelandic Mountain Guides to capture video and digital imagery of the changing landscape. The result is an interactive art exhibition called “Horizon” that will run through Feb. 3 at Industry Lab on Norfolk Street in Cambridge.

This is a 360° video. If viewing on an iOS device, open the video on the YouTube app. Otherwise, click and drag your mouse, or move your mobile device around, to explore the 360° environment. For the most immersive experience, try using a headset, such as Google Cardboard.

“Given that 360 video is a technology that supposedly can capture everything, my intention was to ask: ‘What could a discussion be around climate change when you can see the facts?’ But the facts in this video are also based in time, a kind of memento mori. … The glacier will never look like it did in the video again.”
— Joanne Cheung

“I’ve always been fascinated by the fact that the horizon is an imagined separation and is highly subjective, depending on where you look from,” Cheung said. “Climate change directly shapes our perception of the horizon as the sea level changes the very contour of the island.

“For me, the horizon is also a metaphor for the limits of human perception. What we take to be the vanishing point is but the farthest point we can see.”

“Horizon” uses photographs and 360-degree video to show melting glaciers in stark relief and explore how the coastline will recede as sea levels rise. A unique partnership with Harvard’s Department of Earth and Planetary Sciences visualization lab let Cheung produce the images with state-of-the-art equipment.

Cheung plans to use the photographs in conjunction with a book by the Icelandic poet Stefán Hördur Grimsson in order to stage an imaginary dialogue between text and image.

“Stefán Hördur Grimsson’s poetry has never been translated into English but he has written a lot about landscape. Here, the landscape is like my translator, enabling me to have a dialogue with him through books that I can’t directly read. The pages of his book serve as the frame for the photos I took.”
— Joanne Cheung

Another project, developed with Harvard’s metaLAB, shows two ways to look at the landscape — as an artist and as a computer — forcing viewers to confront the limitations of the tools we use to understand issues such as climate change.

“This piece comes from my first language being Chinese where the characters and the image are one and the same. That drives a lot of my thinking behind landscape — because landscape is always text … is always landscape. And that relationship becomes really interesting when we consider the way computers perceive the world. What are the things that we take for granted when we look at a photograph? And what are things the computer sees? What’s lost when we try to translate between human vision and computer vision?”
— Joanne Cheung

Cheung’s interest in how technology affects perception stems from a project she worked on using a 100-year old daguerreotype camera. She photographed herself running toward the vanishing point, but because of the film’s chemistry her movements did not register on the photographs.

“There is a line between fact and fiction that machines mediate. This piece spoke to how the tools we use limit what we can see — quite literally — and what we perceive to be truth.”
— Joanne Cheung

“Climate change is contentious. People look at it through different frameworks, from different perspectives, and we should consider how the tools they use to see may constrain the facts they observe.”