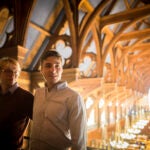 Spreading the word on college admissions

Members of the champion Harvard Debate Council must research endlessly, analyze quickly, and talk both smartly and rapidly

The competition for the Harvard Debate Council is so rigorous that members start preparing weeks before the school year starts, and they don’t let up until the final tournament in March.

Theirs is an all-encompassing effort that demands as much extracurricular effort as a year’s graduate degree work. Required are hundreds of hours of research, a talent for formulating pointed arguments on the spot, and exceptional speaking skills.

“I do fundamentally believe it the most important thing I’ve ever done,” said Tripp Rebrovick ’09, coach of the current team of 15 students.

“It governs the whole year, and in a tournament there will be eight preliminary debate rounds and the top 32 teams go to a bracket-like NCAA March Madness,” said Rebrovick, a former member. “It’s an entire world.”

The council competes in policy debate, with two teams of two arguing a topic (this year’s is national health care) with specific rules for the affirmative and negative sides. Students such as Emily Gordon, a sophomore who is concentrating in the history of science, call it the biggest component of their Harvard experience.

“Every morning I wake up and do some debate work,” she said. “The more you learn, the more you want to learn and keep practicing and keep getting better throughout the year.”

“In an activity that is competitive, the teams that are most successful are the teams that can introduce the most arguments. The more scholars you can cite who support you — if you cite 12 people and someone else can cite two — gives you a huge advantage,” said Gordon, who lives in Lowell House.

The council, which recently won a tournament at Gonzaga University in Spokane, Wash., practices under the guidance of Rebrovick and several full- and part-time coaches. The team also hosts a high school tournament for 3,000 students over President’s Day weekend, as well as a summer workshop to cover costs.

Hemanth Sanjeev, a senior from Macon, Ga., who in 2016 helped lead the team to its first national championship in 26 years, spends about 10 hours a week preparing for tournaments.

“A lot of it is researching scholarly articles, compiling them into arguments, preparing that into readable blocks, looking at teammates’ work, and synthesizing that into strategies,” said the economics concentrator, who began competing in debates in eighth grade. “I like that it’s really demanding that you have to read along and learn a lot about what your opponent is saying. Everybody is always innovating their arguments. Everybody on some level is an intense competitive person in debate.”

Rebrovick said the students eventually go on to graduate school in humanities or physical sciences, law school, and academia. A few, of late, have found careers in the financial industry.

“They learn to be persuasive. They learn to present arguments … that are comprehensible and understandable even if they are complex,” he said.

Yet even the simplest argument can turn profound for the debate team. Junior and current team captain Ayush Midha, who with Sanjeev won the Rex Copeland Award last year as the top debate team in the country, said the team has been “trying to get team T-shirts made for the last two years, but it’s hard to get everyone to agree on something.”

“We got close at one point, but then got to a sticking point: Do we want quarter-zips or full zips, and then it just didn’t happen,” he said. “We’re lacking in the uniform department, but I can honestly say for sure that some of my best friends are on the debate team.”