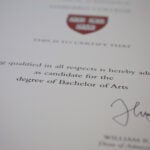 Paola Arlotta, a professor in the Department of Stem Cell and Regenerative Biology, a principal investigator at the Harvard Stem Cell Institute, and an institute member at the Stanley Center for Psychiatric Research of the Broad Institute of MIT and Harvard, has been awarded the George Ledlie Prize by the President and Fellows of Harvard College for her work studying the embryonic brain in health and disease.

George Ledlie’s bequest, in 1927, instructed that the honor be given every two years to the Harvard affiliate who since the last prize “has by research, discovery, or otherwise made the most valuable contribution to science, or in any way for the benefit of mankind.”

“Still early in her career, Paola Arlotta has already had a profound impact on the world of developmental neurobiology,” said Harvard University Provost Alan Garber. “Her groundbreaking discoveries have challenged received wisdom and directly contributed to new conceptual frameworks in the field.”

“I am profoundly honored to have been selected to receive this prestigious award,” said Arlotta. “I am very grateful to all the colleagues who have made my work possible, and have inspired me to dare in my path to discovery. This award is dedicated to my husband and children, for their enduring support and love every day.”

Arlotta investigates how the brain develops and what happens to it when development goes awry, such as in autism spectrum disorder and other conditions. Her work focuses on the cerebral cortex, which controls some of the brain’s most complex functions, including language, sensation, and cognition.

“Our brain is largely built in the embryo, through one of the most impressive, orchestrated processes in biology,” said Arlotta. “I want to understand how the many types of neurons present in the cerebral cortex are generated, how they wire together and interact with a myriad of other cell types to build functional circuits, and how neurons are maintained for the life span of the organism.”

Her early work challenged a major assumption in neurobiology — that the identity of central neurons is set in stone during the formation of an embryo and cannot be changed — by reprogramming the identity of one neuronal class into another. The finding was both transformative in the field, paving the way for fresh thinking on the meaning of neuronal identity, and a possible first step toward innovative therapies for neurodegenerative diseases.

In 2014, close observation of axons and myelin led Arlotta to another fundamental discovery. Contrary to the then-accepted understanding of brain myelination, which held that each nerve cell used a “universal profile” to distribute myelin along axons, Arlotta found that distinct types of neurons “choose” to myelinate their axons in distinctly different ways.

“We still have a very primitive understanding of how our brain develops and functions,” she said. “Consequently, our understanding of human neurodevelopmental disease is very primitive. Human brain organoids generated from cells of patients carry extraordinary potential to serve as transformative models to understand and develop treatments for prominent human neuropathologies, like neuropsychiatric disease.”

Beyond work in her own laboratory, Arlotta and other University researchers were recently awarded a BRAIN Initiative grant by the National Institutes of Health to comprehensively catalog cell types, genes, and regions inside the mouse brain. New tools and technologies have revolutionized neuroscience in recent years. The grant winners hope their work will establish a guide for fellow researchers, broadly impacting many fields of study.

In his support of her nomination, Michael D. Smith, Edgerley Family Dean of the Faculty of Arts and Sciences and John H. Finley Jr. Professor of Engineering and Applied Sciences, highlighted Arlotta’s ability to see past traditional borders within her field and break new ground.

“Professor Arlotta’s work is emblematic of her drive to take on some of the most ambitious questions, without respecting artificial boundaries imposed by field, expertise, or technology,” said Smith. “Her history of innovative work and true discovery in neurosciences makes her an outstanding recipient of the Ledlie Prize.”

Previous winners of the Ledlie Prize include Joanna Aizenberg, for her work in chemistry, engineering, and biology; Michael Brenner, for his work in theoretical modeling in physical sciences and engineering; and Robert Burns Woodward for his research in organic chemistry.